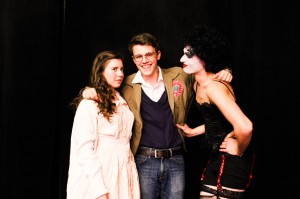 It is midnight. A movie is playing. Instead of sit­ting in the auditorium, the viewers are dressed as the characters on the silver screen. The “shadow cast” is miming the actions taking place above and behind them, and lip-syncing their characters’ lines. Many also talk and call back to the screen, yelling comments in response to the plots. This is the tradition of “Rocky Horror Pic­ture Show,” a 1975 musical-comedy-horror film. The cult classic’s large following and ritual-like viewing practices started a year later. Vassar is part of the tradition, putting up its 20th annual shadow performance this November.

Most of the cast and crew members started their involvement with the show in their fresh­man year. Director Marielle Heydt ’17 has been part of it for all three of her years at Vassar. She recounted, “I had seen the show in high school and loved it. I ended up cast as Magenta, and the next year I signed on to be the assistant direc­tor. The assistant director role is training to be­come the director, so it was a clear step up from there. As for why I wanted to participate, like any other freshman I was looking to be involved in something, and Rocky Horror seemed like a fun choice. I ended up wanting to continue the tradition on.”

Assistant Director Gabriela Maria ’18 started her Rocky Horror journey by playing Eddie. “I had heard of midnight showings of Rocky Hor­ror but had never actually seen one live. When I saw that Vassar was doing it, I knew I wanted to be a part of it somehow. It is not like doing any other show; the experience is far beyond anything else. I was able to be silly and not feel too pressured, while staying passionate and con­tinuing to strive for a entertaining performance,” Maria said.

Playing Janet Weiss, the heroine of the show­case, Sophie Cash ’19 is a new member of the group. She explained, “It’s a hilarious tradition, one that many generations have enjoyed riotous­ly, and I thought it would be awesome to be one of the ranks of people who have made this crazy cult classic come to life.”

Cash continued, “Janet is a really fun role. She begins the movie a docile classic-50s girl, depen­dent on her fiance, the competent, masculine and straight-laced Brad. I’ll try not to give any spoilers, but she has a very interesting charac­ter arc that takes her through a wild journey of discovering her sexuality. It’s such an entertain­ing part to explore because I get to play with the doe-eyed, lady-like stereotype, but also delve into some exciting, revealing, sexy craziness.”

As a shadow performance, the show is quite different from an ordinary creative experience. Heydt wanted to maintain the ritual for the film’s devoted fan base. “Most of our thought process is, ‘How do we mimic the show as well as pos­sible within the constraints of student theater?’ or ‘How do we make this part more fun for the audience/actors?’” she explained.

However, the production inevitably acquires freshness each year. Maria commented, “We all throw in our own creative, strange elements to the production. Last year we used a giant blow-up penis as a murder weapon, and this year we are using a hobbyhorse…the personal energy that each new cast/set of directors puts in makes it a new experience each time.”

The crew also tried to deal with the prob­lems of the original film. Heydt said, “There’s also always the consideration of trying to slowly bring the show and especially the callbacks up to date. The show does portray a lot of harmful stereotypes and attitudes, and even though we can’t change the film we can try to guide the au­dience’s perception of it. We try not to compro­mise the show in a way that would ostracize its fan base while still being respectful and having those difficult conversations.”

For the performers, the sexual element of the show meant enriching performing experiences. Playing Brad Majors, the leading male character, Buster Coen ’18 found the process worthwhile. He said, “It’s funny: work on a show for a cou­ple months to go on stage and have everyone call you an asshole throughout the show (Brad’s being an asshole is constantly incorporated into the callbacks). It’s worth it, though, because the show’s a ton of fun and celebrates sexual free­dom and singing show tunes. Brad’s the straight man, but he evolves throughout the show so that his traditional values are at war.”

Cash found the synchronization challenging. She elaborated, “Unlike other plays in which I’ve participated, Rocky Horror has demanded a very different and more challenging kind of memori­zation, one that is extremely precise to the tim­ing of the lines and accuracy of the smallest of movements of the characters on screen. But it’s also fun, and playing with my own comfort with my sexuality on stage is probably the most re­warding part so far.”

As the rehearsals draw to an end, Heydt com­mented, “I guess personally, I hope that our cast can make friends out of this. We end up getting so intimate through this show that it builds a lot of great relationships. I mostly hope that the cast comes out of this having gained something, even if it’s just a little more confidence in their own bodies,” she said. The Transie Director, David Marquez ’17 added, “I hope that overall people will just enjoy being part of something they’ve never seen before or watching something they have seen done in a new way.”

Maria concluded, “Vassar’s campus can some­times get a bit tense. Rocky Horror is something that allows students who attend to let loose and forget about restraints. It is pure (frankly, ob­noxious) amusement without caring about what your fellow intellectual peers will think, because they are all doing it too.”