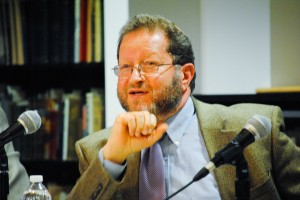 It is important for Vassar students to be aware of the events hap­pening in the world around us. To promote this belief, Vassar hosted a conversation called Dialogue Across Difference: A Conversation on Isra­el/Palestine with Duke University’s Imam Abdullah Antepli and Profes­sor Yehezkel Landau from Hartford Seminary. Issues surrounding Israel and Palestine are important to many Vassar students, and this discussion lent new perspectives to a complicat­ed topic. The event was sponsored by the Office of Religious & Spiritual Life (RSL), a Campus Life and Diver­sity Office at Vassar College, the RSL Forum for Inter-Religious Dialogue, Africana Studies, Jewish Studies, the Department of Religion and the Of­fice of the President.

“On questions of peace and jus­tice there are often diverging opin­ions and often tensions and while Vassar can’t solve those particular issues, it’s possible to create spaces for understanding and awareness,” Associate Dean of the College, Ed­ward Pittman explained. By hosting these two speakers, that is exactly what RSL hopes to do.

The Dean’s Office’s role in bringing these speakers to campus, Pittman went on, is to keep the campus aware of the present international issues. “Beyond the particular dialogue event on Thursday, our goal is to be proactive in cre­ating opportunities for discourse and not wait until a crisis moment,” he explained. He con­tinued, “I believe that President Hill and others are committed to this path of action as it bene­fits students, faculty, staff and the large Vassar alumni community.”

Imam Abdulah Antepli is the Chief Repre­sentative of Muslim Affairs and an Adjunct Fac­ulty member of Islamic Studies at Duke Univer­sity. He is also the founder and executive board member of the Association of College Muslim Chaplains. He is a native of Turkey and also has experience working on faith-based relief efforts in Myanmar and Malaysia. In addition to his current role at Duke University, Antepli was the first Muslim Chaplain there and at Wesley­an University.

Assistant Dean of the College for Campus Life and Director of Religious and Spiritual Life Samuel Speers explained that his relationship with Antepli is through ministry work that they do together. He said, “I know Imam Antepli from some national chaplaincy work we do together. He is one of the pioneers of Muslim chaplaincy in the U.S. and a long-time conver­sation partner of Professor Landau’s.”

As for Landau, Speers explained that they knew each other from past collaborations. Speers said, “I first met Professor Landau when Muslim students and Jewish students at the col­lege collaborated to bring him to campus five or six years ago for a program on Muslim-Jew­ish dialogue. We started talking over a year ago about trying to host a program that would mod­el engaged interreligious dialogue as another way to talk about Israel/Palestine.”

Professor Landau is Associate Professor of Interfaith Relations, holder of the Abrahamic Partnerships Chair, and Director of the Build­ing Abrahamic Partnerships Program at Hart­ford Seminary. He has dual Israeli and U.S. citi­zenship and has worked for over thirty years in Israel and the U.S. with interfaith education and Jewish-Arab peacemaking.

“Both Imam Antepli and Doctor Landau have extensive experience in dialogue across difference,” said Speers. “Each has a profound personal story that has led them to believe that such dialogue is important for communities, especially communities on college campuses, where each of them has made their careers,” he continued.

Pittman agreed that having access to dia­logue, rather than just lectures, is important. He is hopeful that the dialogue between An­tepli and Landau will open the door to wider discussions around campus. “I believe that our focus is on creating opportunities for learning and dialogue around the various perspectives regarding the Israel-Palestine conflict and es­pecially differing perspectives on Boycott, Di­vestment and Sanctions (BDS),” he said. “At the same time, it takes more than dialogue to ad­dress long-standing conflicts—especially when there are fundamental questions equity, peace and justice. Dialogue is a beginning, however.”

Students for Justice in Palestine, however, disagreed. “We don’t oppose dialogue; we op­pose dialogue-centric organizations, like the ones that the speakers at this lecture are mem­bers of.,” they said. “Palestinians and Israeli do not need to sit-down and talk to achieve mu­tual understanding. In the context of ending the conflict, Palestinians only need to know that they are occupied and that Israel occupies them—and every Palestinian knows this al­ready. So it is Israel that must understand that it is the occupier.”

With Vassar organizations like Students for Justice in Palestine and Vassar Jewish Union, this conversation is not one that students are easily able to talk about on campus. for Vassar students.

Students for Justice in Palestine said, howev­er, that they do not feel the College does jus­tice to the issue. “The College as an institution has failed to not only acknowledge the human rights violations of Israel, but also to provide the necessary resources to combat these abus­es, such as more information on its invest­ments,” the organization said. They went on, “Moreover, we do believe that this is a role of an educational institution. After all, Vassar cer­tainly touts the notion that an education should foster a belief in our common humanity. How can Vassar speak of the dignity of all human life, yet stand silent and promote ignorance around blatant human rights abuses?”

Speers said, “Often individual speakers come to campus, share their thoughts, and we receive them or we don’t. In Imam Antepli’s and Pro­fessor Landau’s visit, we have the opportunity to observe and learn from an actual conver­sation between two speakers about a topic so many of us care about.” The issues in Israel and Palestine are ongoing and with an event like this, the conversation on campus can be ongo­ing as well.

Pittman said, “As an educational institution it is reasonable to think that we can foster learn­ing environments where information can be shared and discussed, where various claims can be presented and questioned.”

Speers added, “In past campus efforts around this conversation, my colleagues and I have not wanted to impose a religious frame on discus­sions that were largely political. But we’re also aware that interreligious dialogue has a con­tribution to make to our larger efforts to have public conversations across our differences and disagreements.”

Even if students or professors were not able to attend the event, Speers said, “The most im­portant way to learn is to listen, really to culti­vate listening to one another. We are in a small, often intense campus environment. We are in a community with one another and we are in­credible resources to one another, so listen.”