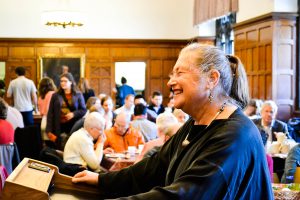 courtesy of the University of Chicago

How and why does jewelry function to transact or circumscribe the ethics of sex within religious narratives?

Professor at University of Chicago, a world renowned scholar on Hinduism as well as the history of religions, Wendy Doniger has made it her profession to answer this question.

Rocky was full of students and faculty alike who were looking forward to Doniger’s lecture. While informative, at the same time Doniger was surprisingly humorous.

Chair of the Religion Department Jonathan Kahn, said, “Her work is always extremely in­novative and creative, pushing and challenging boundaries and norms.” He went on, “Doniger is world-famous and her work sits at the inter­section of multiple disciplines,”

On Monday, Doniger visited Vassar College to give a talk entitled The Mythology of Wom­en and their Jewelry. She covered various wom­en throughout history and mythology and the feeling of validation that wearing jewelry has had on their identity and moral character.

Associate Professor of Religion E.H Rick Jarow said, “What’s really interesting to me is that she single handedly revolutionized the way a lot of people look at Indian texts. She was the first major figure who dared to look at the underbelly of traditions.”

Doniger wasn’t satisfied with the idea of the “ideal” woman. Rather, she worked to bring to light the everyday issues that men and women alike face. “She wasn’t satisfied by just idealiz­ing or narrating but really applied methodolo­gies in such a way that forced us to face issues that we deal with in our lives such as violence, sexuality, power and domination,” Jarow said. While Doniger’s main field is religion, and her lecture was hosted by the Religion Department, her knowledge intersects many fields of study.

Jarow went on, “She has been able to give comparative studies a validation, an academic respect. She has studied with some major In­dologists from Harvard and Oxford. She has reminded us of how important it is to study religion in both domains and it’s application in the world we’re living in as well as scrutinizing texts and cultures”

Doniger, who is well-versed in Sanskrit and Indian traditions, history and mythology, is not afraid to dig deep into the root of different cul­tures. Her recent book “The Hindus,” an alter­native history of Hinduism, was removed from Indian shelves due to controversy.

The book has become a cause for free speech activists from around the world. “We at Vassar stand up for freedom of thought and are against ideological bullying. This is so that everyone’s voice can be heard,” Jarow said.

Doniger’s lecture on Monday took a stance for the trinkets that sometimes spoke volumes about the wearer before she could say any­thing herself. Rings and other trinkets often symbolize either legitimate married women, or illegitimate unmarried women with lovers. Doniger went on to read examples from her unpublished book about the same topic, from Indian and Hebrew mythology to a host of modern culture such as sitcoms and jewelry advertisements.

She went on to provide specific examples from mythology where women used their jew­elry as validation by retelling the tales of Judah and Tamar, Shakuntala and Dushyant, and a few others.

“Why do rings keep getting into stories about marriage and adultery, love and betray­al, loss and recovery, identity and masquerade? What is the mythology that makes rings the symbol of true as well as untrue love?” Doniger asked. She answered herself, explaining, “Rings are an authentication. To a married woman, a ring shows the rest of the world that she is mar­ried to her husband. The other sort of woman gets other sorts of jewelry as validation from men in payment for sleeping with them.”

This event, sponsored by the Religion De­partment, was the Frederic C Wood Lecture of 2015. Wood was an Associate Professor of Religion and the college’s chaplain in the late 1960s.

Kahn said, “His interests were in left-wing politics, in particular questions of gender and sexuality. He died tragically of leukemia in 1970. He was a charismatic presence, an en­gaging teacher and consistently expressed concerns for social ethics and the relevance of religion and guided thinking.”

Kahn went on, “Despite the debilitating ef­fects of leukemia Frederic C Wood lived life to its limits. He showed those around him a robust affirmative attitude toward life. In his memory, his parents generously endowed this lecture series to explore ‘innovative and vital religious thought.’” Doniger represents these traits through her leading-edge take on the role of jewelry in society.

Doniger ended with a Q and A session that was interactive and informative. Doniger gave clear and detailed answers to audience mem­bers’ queries. She answered questions about anything from television shows to Aristotle. Through her answers she provided a glimpse of her immense knowledge about her field of study.

Piper Yang’19, a student in the audience said that Doniger’s delivery of the topic was en­gaging despite its serious roots. Yang said, “I thought it was really good. I think her humor really brought out the idea that it’s almost ri­diculous how the subjugation and objectifica­tion of women is brought about through jew­elry and how it has lasted for so long, and still subtly continues to do so,”