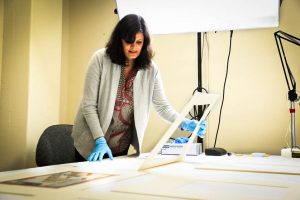 The Deccan region and the rule of its sul­tans was characterised by its rich culture and opulent artwork. However, despite the rich region which attracted many great artists from across Europe and Asia: from Iran, Turkey and Africa, the history and art of this region re­mains ambiguously hidden behind a shroud of mystery and misconceptions.

Associate curator of Southern Asian and Is­lamic Arts at The San Diego Museum of Art, Marika Sardar, brings her specialized knowl­edge and expertise to campus in a talk titled, “The Indo-Islamic World: Prominent Africans in the Deccan Kingdoms of India, 1500-1700.” The event, which was held in Rockefeller Hall 300 on November 10th, exposed students to the connections and interactions between Asia and Africa and the distinctive art that spawned as a result of it.

Professor of Political Science Himadeep Muppidi was the main coordinator of the event. He explained, “The reason the talk is important is that people tend of have stereotypical views of Africa, Islam and Asia. What Dr. Sardar’s work and lecture will help us see are the ways in which these categories are complex and flow into each other.”

This exhibition was the first to concentrate on the Deccan region and the five great sul­tanates that ruled there in the sixteenth and seventeenth centuries. Sardar’s Metropolitan Museum exhibition took 10 years to make and featured works from collections all over the world.

In addition to being the co-curator of this ex­hibition, Sardar also co-authored a book of the same title, which focuses on Deccani works in the 16th and 17th century. The book discusses 200 of the finest Deccani works and examines the various forms of art that surfaced from this culture.

Muppidi said, “Historically there have been significant connections between Asia and Afri­ca. Categories of the way we think of the world now are all problematic. There are all sorts of interconnections. Art history can throw light on some of the historical debates.”

Sardar described the Deccan area as a loca­tion with a very unique landscape. The region sourced many different minerals, including cotton and large diamonds. Sardar said, “The area is connected well-beyond its borders, both through trade and politics.”

Sardar explained, “The art and paintings pre­sented in the lecture have a sense of self-pre­sentation that distinguishes Deccanese rulers from the Mughal in the North.”

Though the artwork and objects spawned from the same Deccan region, today they re­main sprawled across the globe in the hands of several collectors. Sardar states, “It was fun to bring together objects from so many different collections around the world.” In regards to the artifacts in her co-curated exhibition, Sardar said, “Objects were gathered to show the va­riety of shapes. Each object has a different pat­tern to it.”

Despite the distinctions of each artifact, Sardar stated, “The objects illustrate that these are all highly connected areas that each devel­oped their own unique style of architecture and paintings.” She added, “You can’t really see the divisions within the culture of this time. It cer­tainly wasn’t evident.”

The artwork depicted in the lecture and displayed in exhibitions illustrate a rich Dec­canese history and reveal much about Indo-Is­lamic culture. Sardar encountered numerous issues in researching these artifacts, however. Sardar stated, “While the Sultans were Muslim, there was much more diversity there. It was a bit hard to represent in an exhibition.” Sardar added, “Most of the paintings shown provides a relaxed and intimate view into courtly life.”

It is rare to find images of commoners or peasants. The majority of the available artwork are depictions of the region’s court life. Sardar said, “You don’t really see people outside of the court appear in paintings unless it’s part of an illustration in a book.” She continued, “The art we are talking about does not deal with the common people at all. We are only seeing a small percentage of the population presented. This is only a small body of evidence.”

For some, the lecture provided the perfect opportunity for class credit. Sharika Hasan ‘19 is currently in a class covering Indo-Islamic history from the 700s to the 1700s. The topic of the lecture not only coincided with the topic of her current class, but also piqued her interest. Hasan stated, “I thought the topic of the lec­ture was very interesting, and I would have still been interested in the lecture even if the extra credit was not there. The class only brought my attention to the lecture.”

Many misconceptions exist between African and Indian history. Sardar’s lecture illuminated the cloud of ambiguity that surrounds this top­ic. Hasan said, “You don’t really relate African history and Indian history that much, so it was really interesting to see how they connected. It was interesting to see how those connections are happening even if it’s something we didn’t really talk about in class.”