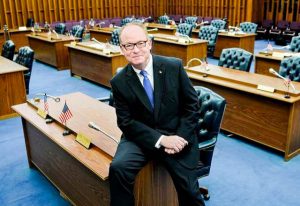 “A message was sent to everyone in this city, our city, one city working together mov­ing forward that’s what we’re gonna do togeth­er,” said newly elected Mayor of Poughkeepsie, Republican Rob Rolison in a statement after the election. Rolison won 60 percent of the general vote against Democrat Randy Johnson with 36 percent of the vote. Rolison will be sworn in as mayor in early 2016 (Time Warner Cable News, “Rolison Elected Poughkeepsie Mayor,” 11.4.15).

Rolison, a retired detective in the Town of Poughkeepsie Police Department, has targeted high crime rates as a central issue of his mayoral tenure with emphasis also on the economy. As Chairman of the Dutchess County Legislature, he established a plan to reduce crime by increasing police presence in “hot spot” areas, increasing police training to include mental health-related training and enforce city ordinances such as lit­tering and driving laws (Rob Rolison for Mayor, “Fighting Crime on Day One”).

Vassar students expressed similar standpoints as Rolison in terms of need for reducing Pough­keepsie’s crime rate. Third year Vassar student and Poughkeepsie resident Muhannad Nesheiwat ’17 reflected on his own exposure to crime and its severity in Poughkeepsie, “[I went to school with a kid] who two months ago was shot in the head at point blank in plain sight over a drug-related is­sue.” He continued, “I know a lot of kids from my high school that tend to avoid [the metro-Pough­keepsie area]. It is not the cleanest area to go to, especially near the train station. You have a lot of homeless people that badger you whenever you walk past them, they harass you.”

Nesheiwat also thought that increasing the resources and numbers of the police force was important. He said, “Poughkeepsie needs more police enforcement, more police on patrol in the areas where crime rates are highest, maybe even some more undercover work to get more drugs off the streets, that will help with the crime rate… We need better programs in schools, more ex­tra-curricular activities [and] other teacher pro­grams that will help students stay interested in school and not get sidetracked by any of these drugs or gangs.”

Treasurer of the Vassar Conservative Libertar­ian Union Pieter Block ’18 also agreed with Roli­son’s immediate approach to dealing with crime. In an interview, he considered the logic behind Rolison’s increased policing plan, “If you stop someone from breaking a window, they won’t eventually commit a murder or a rape ten years down the line. The hope is that if you give some­one a shock to the system very early [and estab­lish] a negative association with committing a crime that people don’t get into serious incarcer­ation which is where serious criminals emerge. It’s where juveniles become hardcore thugs.”

As the Hudson Valley Regional Council (HVRC) Chairman, Rolison identified resourc­es that could be used during his mayoral ten­ure to reform the economy of the city. He said, “These problems will not be solved overnight, but we can begin to make the smart investments we need by exploring state and federal funding sources. Our work at HVRC can direct EDA and other job-creation funding here in order to make Poughkeepsie more competitive and improve the quality of life of its residents” (Rob Rolison for Mayor, “Rolison Highlights Federal Distressed Cities Grant Opportunities Available to Pough­keepsie”).

Not all members of Vassar College feel the same about Rolison’s policies regarding in­creased policing. Professor of History Rebecca Edwards feels that there are different issues that are more critical than high crime levels. She said in an emailed statement, “Crime is not, for me, anywhere near the top of the list of issues that need to be addressed in the area.” She continued, “Poughkeepsie has some of the same issues that many other urban locations deal with: inequali­ty in housing and schools, lack of social services such as good-quality affordable daycare, an ‘un­derground’ economy that leaves undocumented workers marginalized and potentially exploited.”

Edwards specifically expressed her disap­pointment with the direction that Poughkeepsie is headed in dealing with criminals. “One of the issues there is the construction of a very large new jail. Other jurisdictions are turning away from the ‘prison-industrial complex’ as much as possible and seeking alternative treatment meth­ods for drug addiction, for example. But Dutchess apparently hasn’t gotten there yet.”

Few Vassar students recognize the potential impacts of their opinions and votes. President for Off-Campus Activities of Democracy Matters Sam Beckenhauer ’18 attempted to raise aware­ness of votes in an emailed statement, “Students should care about local politics because they have the ability to affect election and conse­quently affect public policy. It is not uncommon for elections to come down to a single vote.” Beckenhauer continued, “Affecting the County races would have had ramifications on the build­ing [of this jail].”

Rolison will enter the office amid high social tensions and with high expectations. Rolison will get the opportunity to respond to concerns about his stances on issues in an interview that will be released in the next issue.