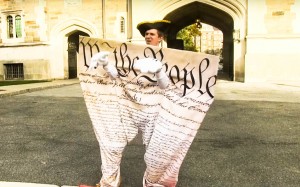 Vassar maintains a special spot on the ever-growing list of American colleges and universities with reputations for being hotbeds of liberal idealism, a description that many on campus wear proudly. Out­side of campus, however, not every­one feels similarly.

On Tuesday, Nov. 3, right-wing nonprofit organization Project Veri­tas, headed by conservative journalist James O’Keefe, released a video to the internet attacking liberal arts college administrators for their stance on political correctness on college campuses. The video, posted originally on the fringe investigator group’s You­Tube channel, featured footage taken in September of Interim Title IX Coordinator and Assistant Director of Equal Opportunity and Affirmative Action Kelly Grab, Faculty Director of Equal Opportunity and Affirma­tive Action Colleen Cohen and oth­er liberal arts college administrators speaking with a troubled student. The mysterious student claimed that she was triggered by the United States Constitution, copies of which members of the CATO Institute had been passing out the week before.

The anonymous student, however, was not really a member of the Vassar community. She was one of O’Keefe’s reporters for Project Ver­itas, sent out to Vassar and Oberlin College to surreptitiously capture administrators’ respons­es to the invented situation. Having made her way into Grab’s office for a private meeting, the undercover reporter explained her situa­tion. “Last week something kinda happened on campus that kind of really upset me and I ended up having a panic attack,” she confided in Grab. “It’s just I’ve been kind of hiding out in my room ever since kind of scared, so, finally somebody told me I should maybe come talk to you about it and see if there’s anything that can happen or anything… They were handing the Constitution out on campus.”

Grab acknowledged the proposed concern, asking if there was anything the student im­personator felt could be done to help alleviate the troubling circumstances. “I’m sure there are also some people who, who maybe don’t under­stand the impact that this might have on folks, right?” she asked. “I think what you’re sharing with me is that your interaction in receiving this was harming, right? And that’s what we certainly want to avoid. We don’t want to limit people in exchanging ideas or having opposing viewpoints, but when it’s disruptive or causing harm…” The reporter then told Grab that she had the copy of the U.S. Constitution she was given with her, and asked if Grab would be will­ing to destroy it as a means of catharsis. Grab agreed, and shredded the copy.

Having caught Grab in the act, O’Keefe, dressed in a Constitution mascot costume, ar­gues throughout the video that the surreptitious footage is evidence of a culture of political cor­rectness that has taken precedence over respect for one of the nation’s founding documents. “When this idea came up in our newsroom about campus administrators shredding the Constitution because it’s a trigger against stu­dents, we didn’t think people would actually fall for it. But we underestimated just how stupid and politically correct these people are,” he says. “We were amazed and disappointed. Political correctness and cultural sensitivity run amok.”

The video, which received thousands of views almost immediately after it was picked up from YouTube by websites Campus Reform and The Federalist, was met with outrage from internet conservatives with similar views. One YouTube commenter wrote, “It’s funny how these college officials find the Constitution so offensive, but seem to have no problem with the part of it that gives them the right to shred it because they don’t like what it says.” A person commenting on The Federalist’s coverage of the story remarked, “You want to help a student who is ‘traumatized’ by the site of the constitution? Give them a se­mester abroad in country with no constitution.”

On campus, however, the video has been re­ceived differently. Most have agreed that Project Veritas’ actions were unethical, and many more have called the video a clear instance of entrap­ment rather than investigative journalism. On the night of the video’s public release, President Catharine Bond Hill wrote in an emailed state­ment, “It is clear that the impersonator was at­tempting to entrap members of our staff whose responsibilities include providing an unbiased, empathetic response to students who express being in distress and a referral to other appro­priate resources on campus…It is unacceptable that someone would take advantage of our ad­ministrators’ openness in such a dishonest and fraudulent way.”

Similarly, Acting Dean of the College Benja­min Lotto addressed the video as malicious. He wrote in an emailed statement, “Project Veritas’ ‘reporting’ is widely known to be and has been repeatedly demonstrated as fraudulent, unethi­cal, and illegitimate. Like many students, I feel outraged over their violation of a confidential space for the Vassar community.”

This was not the only issue community mem­bers took with the video, however. VSA VP for Student Life Christopher Brown ’16 asserted that even more troubling than O’Keefe and Project Veritas’ attempts to purposely smear the names of Vassar and other liberal arts colleges was their willingness to do so at the expense of the time and effort of student-support administra­tors like Grab and Cohen. “I find that the fact that Project Veritas used false pretenses in or­der to bait these women absolutely disgusting. Surprising, no, but disgusting, yes,” Brown com­mented. “These women are important resources on this campus, and the only thing that makes me angry about this whole process is that their time was wasted by someone who was posing as a distraught student.”

Criticism of the video and its creators came strongly from the Vassar community. Stronger, however, has been the community’s overwhelm­ing support of Grab and Cohen in light of the video, as students and administrators alike as­serted that the two acted entirely appropriate­ly in the situation they were presented with. Brown went on to posit, “I think that the vid­eo portrayed both Kelly and Colleen as well as the other women from Oberlin in very positive ways, frankly. Kelly and Colleen, in their capaci­ty as resources for students, were attempting to help someone who came into their offices seem­ing extremely distraught. They handled them­selves with professionalism and I would expect nothing less from two well-respected faculty members from this campus.”

Lotto agreed, “What I see in the video is Kelly responding to a ‘student’ who came to her confi­dentially and was in crisis. Her reaction was un­biased, empathetic, validating, and supportive. In other words, she was doing exactly what she should have been doing, and doing it superbly. The same is true for Colleen Cohen. I’m proud that we have such excellent, committed, caring professionals working on campus to support our students.”

In a show of community-wide solidarity, doz­ens of students have written to Grab and stopped by Metcalf House to succor Vassar’s Title IX Of­fice after the slanderous video went viral. Days after the story, a Google document spread across social media outlets, where students could put their name and class year to show their support. Several hundred students wrote their names down in just a few days, as did some alumnae/i.

In spite of the outpouring of community support, many have remained worried that O’Keefe’s manipulation of the College’s open campus policy may necessitate a reconsider­ation of that openness. Lotto mused, “Having an open campus provides tremendous value in connecting Vassar to the greater Poughkeepsie and mid-Hudson Valley communities. However, an open campus policy comes with some chal­lenges as well. The Vassar community needs to have a broad conversation about what it means to have an open campus, and specifically [the] who, when, and how of access to different parts of the campus. It’s not clear whether a more re­strictive access policy to campus would prevent a college-aged individual posing as a student from walking into an office whose fundamental purpose is to be welcoming and supportive.”

Others have wondered what the campus com­munity’s response should be, whether to pursue legal action against O’Keefe and Project Veritas or to simply let the matter fade into oblivion on its own. Lotto asserted that Project Veritas’ actions, however objectionable, are best left ig­nored. “In my opinion, any response implicitly recognizes this video as worthy of consideration — which it is not,” he wrote.

Director of Media Relations and Public Af­fairs Jeff Kosmacher proposed that the best solu­tion to public outcry from these conservatives is simply for the community to remain steadfast in their belief in what Grab and Cohen do for Vassar, and be vocal about it. “Maybe one of the most important things students can do as a re­sult is to share with others their pride in the Vas­sar people so dedicated to their wellbeing and education,” he wrote in an emailed statement.

Brown expressed similar sentiments, suggest­ing that support for Grab and Cohen is already building within the community. “I honestly think the best thing to do is what already has hap­pened. The buzz behind the video itself seems to have gone away and been forgotten, and there was a lot of love thrown out into the world by students and faculty alike, especially about Col­leen and Kelly,” he explained. “I think the com­munity just needs to focus on how these women handled themselves during this moment, and enjoy the fact that we live in a community with such inspiring mentors and professors.”

Neither O’Keefe nor Project Veritas have re­mained silent since the video’s posting, howev­er. A second video was released two days after the first, on Nov. 5, featuring the same methods used to entrap Grab applied to administrators in similar positions at Yale University, Syracuse University and Cornell University. In all three instances, given the same pretenses, the admin­istrators chose to destroy the pocket-sized copy of the Constitution, once again raising a furor among right-wing viewers.

Just as was the case for Vassar, however, those communities responded with continued sup­port of their Title IX officers, refusing to accept that their reactions were inappropriate or dis­respectful. In a press release, Vice President for University Relations at Cornell University Joel Malina expressed similar criticism of the meth­ods used in the production of the video and the slanderous intentions of those responsible for it. “The Project Veritas video released today would have you believe an employee was helping a stu­dent make a political statement by denigrating the U.S. Constitution. In fact, the video shows a ‘reporter’ misrepresent herself as a student with a mental health crisis,” Malina wrote. “Whatever personal views she may have shared in order to connect with a ‘student’ who appeared to be in crisis, as an employee of Cornell University she was appropriately focused on addressing the ap­parently urgent need of the person before her and not on any larger political context” (Cornell University Media Relations Office, “Vice Presi­dent Joel Malina on today’s Project Veritas vid­eo,” 11.05.15).

Whether Project Veritas will continue its at­tack on Vassar’s peer institutions appears un­clear. For now, however, the community remains hopeful that it will survive the attempted char­acter assassination, and that Vassar’s reputation will not be tarnished by the incident. “The sad facts are well known,” Kosmacher remarked. “Project Veritas manufactured a result that serves its purposes. Hopefully their deceitful practices will be seen for what they are, by any­one who might otherwise gain a misimpression of Vassar through this charade.”