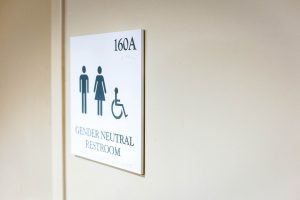 Vassar has been co-ed since 1969, and its dorms have been co-ed since the issue was put to a vote in the 1980s. One of today’s issues surround­ing gender and space on campus is now equally as fundamental as dormi­tory space: accessible and safe bath­room facilities for all, including trans­gender and genderqueer students. Many in the Vassar community are now striving to move past acceptance of co-ed standards and on towards the adoption of standards that would create a safer space for students of all gender identities.

The Gender Neutral Bathroom Ini­tiative, spearheaded by a group of stu­dents and staff and led by Director of the LGBTQ and Women’s Centers Judy Jarvis, is the community’s response to the lack of available, non-gendered restrooms in campus facilities. The initiative began in the spring of 2013, when there were about 13 public build­ings on campus unequipped with gen­der neutral bathrooms, nine of which have now been outfitted with at least one. The four or so that remain in­clude the Chapel and Sanders Physics, both of which have two each of men’s and women’s bathrooms.

According to their website, the initiative’s goal is to make sure that all students feel safe in the basic necessity of restrooms. They intend to make at least one gender neutral bathroom available in every academic and administrative building. At a VSA Council meeting on Nov. 8, Jarvis affirmed, “We aren’t trying to change every single bath­room to be [a] gender neutral bathroom.”

Rather, the reasoning behind the movement is to make many students feel more comfortable go­ing about their daily routines and allow them free­dom to participate fully in student activities. “To have to weigh whether you want to use a restroom means you are not at your best in the classroom,” Jarvis stressed. “It’s an additional stressor that not everyone has to deal with. It also goes with our non-discrimination factor.” The initiative’s web­site states that Vassar’s nondiscrimination policy includes gender and expression.

During a VSA Council meeting on Nov. 15, President Ramy Abbady ’16 proposed a resolu­tion pledging and renewing the VSA’s support for the initiative. The resolution passed unanimous­ly, reaffirming the support that the initiative has in the student body’s representative arm. VP for Student Life Christopher Brown ’16 commented in an emailed statement after the council meet­ing, “The VSA created a resolution in support for this initiative two years ago when it first started to take shape. This year, the resolution’s purpose is mainly to reaffirm the VSA’s stance in saying that there is still much work to be done in terms of Gender Neutral Bathrooms, especially in regards to faculty and staff training.”

In last week’s VSA Council meeting, Jarvis re­marked, “I don’t think professor dissent will undo this work. My fear is that if a lot of negative in­formation is around, then nobody will consider it for the future.” In order to stop the spread of false information and encourage the community to in­form themselves about the issue, the LGBTQ Cen­ter debunked several myths about gender neutral bathrooms on their website. One such myth is that co-ed and gender neutral bathrooms are the same, and that the one should be an acceptable stand-in for the other. The site reads, “A co-ed bathroom acknowledges only male and female whereas a Gender Neutral Bathroom acknowledges the re­ality of multiple gender identities.”

Beyond the lack of information, another reason that the initiative has not yet been successful in converting at least one bathroom in each building is due to codes. The College has strict regulations, especially on the older buildings. Jarvis admitted, “There are some buildings that Vassar just won’t touch. That being said, we still were able to work pretty well. We were able to get folks on board to allow multi-stall bathrooms to be gender neutral. Any single occupancy bathroom is really easy.” She reiterated, “Mostly the resistance is coming from misinformation.”

While there has been progress since the ini­tiative began, their work is not finished, as Jarvis reminded the VSA. “We are at a point where peo­ple think the initiative has been successful. That’s not true. We still have four-ish buildings that don’t have gender neutral bathrooms. I’ve had com­plaints from professors or staff members from three different buildings on campus. There has been vandalism on signs in Main and another sign was completely ripped down in Davison. What I need your help with is that we need to work to maintain these bathrooms on campus.”

While there is a support base among the gen­eral student body and select administrators, Jar­vis stressed the importance of garnering support from other members of the Vassar community. “Admin and students don’t stay here as long as faculty members and staff members. The main drivers here are the people who turn over the fast­est.” However, she also recognized the work that needs to be done even within the student body. “In my experience, it hasn’t really been students with the issues. They get acclimated pretty well. It’s not to say that the students are all on board. Bias incidents say otherwise.”

VSA members at last week’s Council meeting responded, offering suggestions for spreading the word about the initiative, including creating post­ers, providing information sessions during fresh­man orientation, and writing campus-wide emails and letters, such as the very one that the VSA approved on Tuesday night. Through continued collaboration with the VSA, Jarvis and the other initiative supporters intend to increase awareness and understanding of the issue and open more avenues for trans allyship. Brown summarized, “Vassar as an institution should be supporting the LGBTQ Center as well as other centers associated with Campus Life and Diversity in a more obvi­ous and direct way. This not only takes a financial form, but an institutional support form as well… [especially] acknowledging the power dispari­ties among different identities on this campus, and just showing a willingness to learn and listen when it comes to issues like this.”