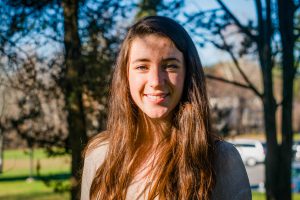 There are a host of ways to judge the success of a team’s season. The women’s volleyball team fin­ished with a 14-15 record overall on the year, with a 5-7 record in the Liberty League. While they may not have won their division or the Liber­ty League Tournament, the team held a close bond throughout the year and looked to strong individual perfor­mances and dramatic matches as a measure of success.

As the Brewers closed out their season, the team’s efforts and individ­ual success lingered as two members of the Brewers earned conference ac­colades. This past Wednesday, Nov. 11, the Liberty League awarded fresh­man Devan Gallagher of the women’s volleyball team Rookie of the Year, as they announced their all-conference teams.

Both players are entrenched in Vassar lore as two of the greatest suc­cess stories in the history of the Vas­sar’s women’s volleyball program.

Gallagher became the first Vassar College freshman to lead the team in kills since the 2009 season, post­ing 290 kills for the Brewers, averag­ing 3.09 terminations per set while leading them in attacking percentage with a .234 clip. Gallagher was named Liberty League Rookie of the Week twice this season, tied for the most of any conference newcomer. This is quite an impressive feat for a fresh­man to undertake.

Sophomore Ashley Hoyle [Full Disclosure: Ashley Hoyle is a report­er for the Miscellany News] spoke of Gallagher’s talent, “I have been so impressed with Devan’s ability to come into the program as a rookie and really soak up all of our philoso­phies and grow to understand the ins and outs of our team so quickly. It has been a pleasure to see how hard she’s worked at opening herself up to all of the new experiences she’s had with Vassar volleyball, and its been even more of a pleasure to see how she’s obviously gotten so much out of her first season with us. It’s not always easy for rookies to adjust to our pro­gram—we do a lot of mental training, but Devan has been so committed to working towards understanding what we do. It makes us really excited about the future of the program.”

Head coach Jonathan Penn agreed, “I love coaching Devan. She is tough and driven and wants to make herself and the team better, which is what any coach wants. As she contin­ues to grow in the program and improve I ex­pect her to have an ever-growing impact on the team, both as a player and a leader. She has an outstanding work ethic and is extremely com­mitted to the highest standards and expecta­tions both on the court and off.”

Gallagher’s teammates are proud of their ac­complishments and recognize their contribu­tion to the team’s success. According to junior captain Sierra Tobin, “Devan is competitive and confident on the court, and we [the team] can always trust her to put the ball away. When she gets a kill, she recognizes that it was because of a good set and pass as well.” Tobin also spoke highly of Gallagher’s work ethic, “Devan is a hard worker, and works to improve on whatev­er she can.” Hoyle echoed Tobin’s sentiments, “She is a kind teammate that really lights a fire in everyone on the court. She is always the one to say what needs to be said and who is pushing everyone to do more. She’s really exciting to be around and her genuine love for the game is ac­tually just so endearing and fun to play around.”

Gallagher reflected on her first year in the program, “I had a great first year. This volley­ball program is vastly different than any other program/team I have ever been on because of the amount of work we put in off the court, but once I got used to everything I had a great time.”

Despite her outstanding performance in the gym this semester, Gallagher was surprised and credited her teammates for her success, “I was not expecting it, but it was definitely a huge honor. Honestly, I think that it made me recog­nize how much the team helped me grow as a player. When I came into preseason I was a very different player than I am now, and so yes, the award is an honor, but it really would not have been achievable without my teammates. In par­ticular, Sophia and Annie (our setters) worked incredibly hard. I think it’s easier to only look at the hitters on the team because they gener­ally end each point, but really I could not have gotten any kills without their amazing setting.”

Hallum just finished an incredible career this season with yet another standout campaign as she posted 4.77 digs per set, the second-best in the Liberty League. Hallum led the team with 404 total digs, and finished second in program history for career digs with 1,968 digs.

Hallum also set the school record for digs per set for a career with a 4.77, besting the previous mark of 4.22. Penn commented on what it was like to coach Hallum for four years, “Chloe is one of the great success stories of this program, culminating with a great senior year. Beyond having a great career, a couple of fantastic ca­reer records! She has meant so much to the de­velopment of this team over her tenure it is hard to express what an amazing legacy she leaves as a teammate, player, leader and person. She epitomizes what we want student–athletes to become. We will miss her.”

Tobin only had positive things to say of Hal­lum, “Chloe is very competitive, passionate, and hard-working. She constantly pushes us to be the best we can be because she knows that we can be great. Hoyle agreed, “Chloe is the best teammate I have ever played with. She has an undying commitment to insisting that every­one around her be giving maximum effort and a great success rate with helping people achieve their full potential. Chloe is the most hardwork­ing, dedicated and inspirational player I’ve ever had the privilege of playing with and her leader­ship and presence in the program has changed me as a person—and I’m sure I’m not the only one.”

For Gallagher, speaking of Hallum was bitter­sweet as she was only able to play one season alongside of the senior. She explained, “Chloe was an essential part of our team. Her intensity and passion really fuels everyone else up. Ev­ery time she steps on the court her desire and energy is always there and it makes her such a reliable player. I don’t think I have ever played with someone with that much fire, but all of her intensity comes out because she believed in our team and I think that is what was really inspir­ing for us. I keep thinking how much I wish I could play all four years with her, because her talent and energy will be hard to play without.”

It seems certain that even with the loss such key players and team leaders such as Hallum, their legacy and contributions will remain with the program. Newcomers such as Gallagher who have already proven themselves as team players and fierce competitors will return next season with fresh experience and will look to bolster the team’s success.

As for now, they can only reflect on their season and their current and former teammates with fondness. When asked what their favorite memories from the season were, Tobin reflect­ed on a special victory, “My favorite part of the season was beating Union in four sets the first time we played them because we really came together as a team. We need to work on capital­izing on the last few points of sets and matches to finish stronger.”

Hoyle elaborated on a favorite team tradition, “We do something called ‘story time’ where one [of] us closes out the practice by telling a story. I love hearing bits and pieces about my team­mates’ lives before Vassar and it always ends in a good laugh.”

Gallagher was enthused about getting to know her new teammates and friends. She ex­plained, “It is hard to remember specific mo­ments, but I think I really valued the time we got to spend off of the court together. Having a week of preseason without any other distrac­tions was really helpful in terms of getting to know everyone on the team.”

Penn agreed, “The best part of this year was how a very young team grew and learned over the course of the season. We will be looking to step up our competitiveness and mental tough­ness moving forward, but have a lot of important pieces in place to come back strong next year.”