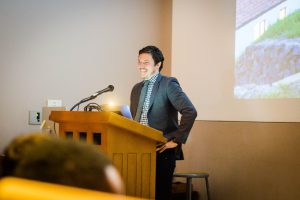 On top of a hill in Butaro District of Northern Rwanda, a pubic hospital opened in 2012. The building is mostly white and taupe with a modern look. Its external walls are made of local volcanic rocks, hauled up by local community laborers. This approach of adopting local ma­terials and employing residents reduced the facility’s price to roughly two–thirds of what a comparable hospital would typically cost in Rwanda, saving 2 million dollars in construc­tion fees while providing over 4,000 jobs. In­side the construction, wards also take a non– conventional structure. Two lines of beds are arranged in the middle of the room, allowing patients to look at outside views while lying in bed, a design that not only reduces infection but also improves ventilation.

This project is one of the works by MASS De­sign Group, a nonprofit architecture firm that leverages buildings, as well as the design and construction process, as mechanisms for social change. The CEO and co–founder of the firm Mi­chael Murphy visited Vassar and gave a lecture entitled “Catalytic Architecture” this past Tues­day, Dec 1.

In the dark lecture room of Taylor 203, Mur­phy traced his journey and exploration. “The central question is what is the value of architec­ture? What can buildings do?” Murphy proposed. Rejecting the idea that architecture is an object and the architect is an autonomous maker solely responsible for the object, Murphy argued that buildings are processes: not a noun but a verb. According to him, architecture plays an integral part in people’s daily life and well–being, no matter socially, culturally, politically or medical­ly. One of the events that led him to this under­standing was his father’s illness.

When Murphy was an undergraduate student abroad, he learned that his father had cancer and wouldn’t live long. Hoping to do something meaningful during this time, Murphy decided to continue the house–restoring project his father undertook before. As Murphy worked on the house, his father went into remission and started working with him, for a much longer time than expected by doctors. Murphy said, “My father told me that the house saved his life.”

Realizing the essential role of architecture and built spaces in everyone’s life and the way they affect people’s health, Murphy co-founded MASS Design Group and further pursued this ideal and approach to architecture. Together with other partners, MASS has undertaken projects of clin­ic and medical centers, primary schools, librar­ies and memorial sites in both developed urban spaces and rural environments.

Currently, Murphy is working on several proj­ects here in Poughkeepsie. Growing up in the town of Poughkeepsie himself, the architect is cooperating with local non-profit organizations such as Hudson River Housing and Family Part­nership Center.

“We’re working in the city center, encouraging various members of community to invest in the city. Not just to revitalize, but to foster inclusive growth, improve social justice as well as equity… We’re trying to redesign Poughkeepsie in an in­clusive and visionary way.,” said Murphy. The architect also shared his initiative of establishing a Hudson Valley Community Design and Entre­preneurship Center at the lecture.

The lecture drew a large audience of students, faculty and local residents alike. Urban Studies major Eli Ness ’17 saw it as an opportunity to bet­ter understand architecture. “I feel like there’s a gap between Urban Studies and architecture. We don’t get as much exposure to topics about archi­tecture and design in the department. So I’d like to learn more about it.” A studio art major hop­ing to become an architect, Antoine Robinson ’18 was attracted to the idea of using architecture as a means of social change.

Associate Professor of Art and Urban Studies Tobias Armborst helped bring Murphy to Vassar. He recounted, “I met Michael Murphy a couple of years ago when we were together on a panel. Working on somewhat related topics with our re­spective practices our paths crossed occasional­ly. Recently a mutual friend alerted me to the fact that Mr. Murphy’s office is doing work in Pough­keepsie, and I thought it would be a good idea to bring him to the College to tell us about it!”

He continued, “Their office is part of a group of younger firms who are emphasizing the role of architecture for social change…They are tak­ing quite a different approach to architecture: not only about form–making, but about what ar­chitecture can do to make people’s lives better, which has not been central to architectural dis­cussions for the previous decades or so.”

For Murphy, “I think all architecture has im­pact. It just depends on if it’s positive or nega­tive social impact. So I got involved in that by being introduced to a series of projects that have obviously shown positive social impact. For ex­ample design groups and NGOs working abroad in Haiti and Rwanda, buildings that make a big difference not only in terms of access to better medicine care but also bringing about dignity and vision.”

However, finding a viable business model to realize this ideal is not easy. “We are non-tra­ditional because we are a non–profit group. So our business model is different. Typical practice models are relying on high network people to pay for projects since architecture is a very expen­sive trade. But we are thinking about using archi­tecture to bring about positive social change. So we have to have a different configuration.”

During the lecture, Murphy played a video. A woman worker who built the external walls of the Butaro District Hospital recounted her experiences working as a mason, an occupation considered unsuitable for women. However, the hospital project allowed her to work and support herself. She said at the end of the clip, “You can’t count the true value of dignity.”

Murphy concluded, “I think this really sum­marizes is what is possible with architecture. We can equate it for a cost per square foot. We have to think about potential gain and loss of dignity.”