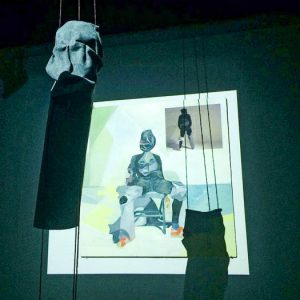 Within our identities is a history. The plac­es we come from, the beliefs we hold, the orientations we associate with and more are part of a journey, evolving through time to where we are today. Just as they form an out­line of who we are, they also embody a history of how we embrace who we are. And there is no better way to capture such a wide topic as this than with art.

In a general statement from the artists, they stated the guiding principle of the show: “We will uncover the trace of a former existence, confront the actions of that existence, unmask the model it instills, reconsider the organic, re–trace the line of sight, and map anew.”

Different forms of art will be on display, in­cluding photographs, video, oil paintings and sculptures, some pieces combining the styles. Brown will be exhibiting a piece entitled “re-distribute, re-present (as Ana Mendieta did foretell),” which includes photographs, videos and objects in its composition.

One of Klapper’s pieces, “Seeing myself looking at my–self looking at my self seeing,” is an installation piece that involves a video projected onto a painting, a mask dangling be­tween both, all at once part of an archeology of the self, where the artist is all at once the archaeologist, the mask–artifact and the cre­ator of the mask-artifact.

“The concept of “trace” is in continual di­alogue with that of time. The idea is that the past is always present when we encounter the present. Past, present and future collide and cast shadows upon one another,” Klapper said.

Originally, the Studio Art Department pre­sented an exhibition every fall called “Sum­mer Work” for majors and non–majors to ex­hibit the art they created over summer break. But, because it would generally take place at the start of fall semester just as students were adjusting to classes, the exhibition was diffi­cult to organize and coordinate. And so this year the department decided to rename, re­brand and reinvigorate their event.

Describing the process for how the rede­sign of the exhibition was initiated, Associ­ate Director of the Palmer Gallery Monica Church commented, “Working with Art Stu­dio faculty member Laura Newman and [As­sistant Dean for Campus Activities] Terry Quinn…I reimagined this exhibition.”

Church continued, “We changed the tim­ing—the end rather than the beginning of the semester and chose to work with a group of serious art students who may or may not be art majors. I met with the students to discuss the process of exhibiting at the Palmer Gal­lery and what would be expected of them. They collectively came up with the name and theme of the exhibition, the announcement design, provided images for campus commu­nications etc. just as any other artist or group of artists would.”

The artwork that these students created was not originally made for this exhibit, but rather the connecting theme of the word “trace” fit accordingly to both their work and vision: to identify, critique and redefine the elements within one’s existence.

With the word ‘trace’ holding many mean­ings, each artist has set out to capture the different side of that idea in a way that feels meaningful to them. While Brown’s work traces the role of the female body in the past and present, Hallewell’s piece traces the re­straint a hard outer shell can have on feeling a sense of freedom.

Clarifying the name of the exhibition, Brown explained, “Tilhenn and I sat down and thought about the work of the students included in the show. We thought about the conversations that we’ve been having about all of this work together. And we tried to find a word with a shifting definition that could draw people in to look at our work with a lens that also shifted.”

She continued, “So, for example, a ‘trace’ as a noun is a remnant left behind. It is proof that something occurred, that something or someone was there. Then, ‘to trace’ is to copy, to follow, to track. For me, art breathes in the gray area between these two definitions. It is a self–assertion into a system that has laid down so many patterns to follow.”

As college can be a time where one ex­plores who they are and what they want to be, this exhibition tackles that concept through the exploration of the artists’ own identities. Many are determining what kinds of art­ist they want to be as they find their voices through the work they create.

Just as vague as the word “trace” is, “artist” can mean many different things too. These artists experiment with different elements in their pieces, finding what captures their mes­sage the best.

Regarding the impact she hopes this exhi­bition will hold, Brown said, “I hope this show tells students they can create something big in a place that can feel so small. Our voices often get so boxed in. It’s really important to find avenues that allow you to individualize yourself.”