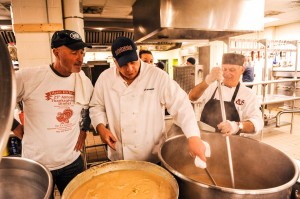 On an unusually quiet afternoon in the City of Poughkeepsie last Thursday, Nov. 27, the Family Partnership Center downtown was awash with noise. 600 people sat laughing, talking, and, most impor­tantly, feasting on a Thanksgiving meal cooked right here at Vassar in the All Campus Dining Center (ACDC). The special meal has been sponsored by Dan Hickey for the past 25 years in loving memory of his wife, Eileen Hickey, who passed away from cancer.

Very soon after Hickey began sponsoring the yearly Thanksgiv­ing meal, Executive Chef at Vassar Bruce Harms and Head Chef Mi­chael Conlin became deeply in­volved in organizing it. Harms has been a volunteer and leader at the Eileen Hickey Thanksgiving Dinner for over 21 years. When asked why he has returned year after year to help he said, “I keep coming back because it’s a great way to celebrate a holiday that is all about gratitude.”

Hickey reiterated the spirit of thanks Harms expressed when he spoke of Vassar’s contribution. He said, “It’s a huge help to use Vassar’s great facility, and then we’re so lucky to have a professional chef to lead everything.” The preparations for the meal, which begin Wednesday, Nov. 26, can be a time for volunteers from the Vassar and Poughkeepsie communities to bond.

The contemporary interpretation of the Thanksgiving holiday centers around bringing people together. For Harms, that’s exactly what the event at the Family Partnership Dinner pro­vides year after year. Harms, reflecting on this year’s dinner, said, “It is always great to see so many people from the college and members of the greater Poughkeepsie community working together to prepare the meal. I always walk away with that spirit of cooperation in my mind.”

With 40 volunteers led by Conlin, Harms and a few others prep and cook the food from Sysco. Once the soups are boiled, onions are chopped and turkeys roasted and ready for eat­ing, everyone travels together to the Lunch Box at the Family Partnership Center in downtown Poughkeepsie to deliver the food.

The Family Partnership Center has focused on four main goals since 2007: housing, health, jobs and youth. As the New York Family Ser­vices website explains, “The Partnership Cen­ter is a catalyst to forge community partner­ships through collaboration and advocacy in health services, cultural and educational op­portunities to improve the lives of individuals and families.” This falls directly in line with the goals of the Eileen Hickey Thanksgiving Din­ner, making it the perfect location for hosting the community feast.

Harms said of his participation in the meal, “I’m lucky. I have kids and I have grandkids. I’m able to share dinner with them later on Thanksgiving day, but this has become a way to celebrate for me, to recognize my good fortune by taking my kitchen skills and helping folks get a good dinner on an important day.”

This is one very special meal of many given out every year for the Lunch Box, which oper­ates as a local soup kitchen year round, often serving 200 people a day. The organization, which had its start in 1982, served 110,000 meals in 2013 with a staff of 10 full-time employees. Meals are provided five days a week, with an extra lunch on Sunday. The rest of the workers are volunteers from the greater Poughkeepsie community.

In addition to the 600 meals served on Thanksgiving Day at the Lunch Box, the vol­unteers delivered another 400 Thanksgiving dinners to people at home who weren’t able to make it to the communal meal because of dis­ability or other needs. Vassar volunteers also delivered fresh apple pies to the Beulah Baptist Church in Poughkeepsie that afternoon.

Pie on Thanksgiving is accompanied by a number of other charities at Beulah Church, which is located just a couple blocks away from the Lunch Box. As the weather begins to turn, the Church sponsors a coat and clothing drive, as well as a weekly soup kitchen on Saturdays.

Prominent local figure and community ac­tivist Earline Patrice originally started the Thanksgiving Dinner that Hickey now funds every year. Patrice, who asked the Hickeys to take on the project because she felt too old to maintain it, was a community leader well-known for her public Christmas parties and Easter Dinners in addition to the Thanksgiving one.

As a community activist, Patrice participat­ed in the march on Washington for civil rights and worked in Poughkeepsie to provide hous­ing to the needy, register voters and keep the streets clean. It is her legacy that the current Thanksgiving meal Vassar helps with has to thank.

Over this year’s holiday, the kitchen at the ACDC was bustling with activity to provide food for the Eileen Hickey Thanksgiving Din­ner. But, the rest of campus remained relatively quiet, as most students returned home leaving our campus sidewalks, MPRs and parlors de­serted.

In the early days of the college, however, the campus would have been filled with the same resonant sounds as there were in the Family Partnership Center last Thursday. “As the stu­dents only had a day off for Thanksgiving, very few chose to leave campus.” the Vassar Online Encyclopedia notes. On that one day, campus abounded with huge Thanksgiving meals in the dormitories.

Last Thursday, volunteers prepared the ex­pected array of delicious dishes, including mashed potatoes with gravy, green beans, corn, stuffing, roasted turkeys, beets and pie at the ACDC. But, on a Thursday in 1872, Vassar’s Thanksgiving menu looked a bit different.

Meat jellies, gherkins, boiled salmons and mock turtle soup were served along with the traditional roasted turkey meal. For dessert, instead of pie there was ice cream and cake followed by a reading of Shakespeare’s “The Merchant of Venice,” a brief dance and a stu­dent-run one-act play.

When we look back at those old meals, it’s tempting to wonder what their favorite dish was. Or to ask whether most students even ate the turkey. Perhaps it’s best to imagine that some traditions don’t evolve over time. Per­haps like for many of us, there wasn’t single favorite food on Thanksgiving.