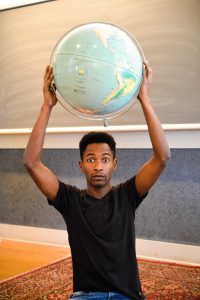 What would it be like to attend school across an ocean from your home? VCTV seeks to explore the answers to that question from the perspectives of international students from all over the world in its new web series, “Lost in Translation” (LIT), that will be released at the beginning of next semester as a series of five epi­sodes, each five minutes long.

Creator and executive producer of LIT Josh Pratt ’16 explained, “I had the inspiration for the project on the back of my own realization that after three years of living in America, there was still so much of it I was yet to under­stand.” Pratt set out to interview in­ternational students like himself who were coming to some of the same re­alizations. Hoyle is a staff reporter for The Miscellany News], who joined the team as director of pre-production over the summer said, “As an international stu­dent here, Pratt has a really unique perspective and unfortunately, one that isn’t usually tapped into or highlighted.”

International students often find themselves feeling unintentionally marginalized. Host of LIT Simeon Busano ’16, explained, “I do think we have a bit of a different time here. For many of us, who we are, or who we believed ourselves to be gets fundamentally challenged once we get to Vassar.”

He added, “We have histories of race and gen­der and class and things we never much thought about before Vassar that come to define our iden­tities here. It’s different.”

LIT was created to bring those differences to light. Hoyle said, “Josh came up with this idea to try and bring international students’ voices to the forefront of the discourse at Vassar and to help make their voices heard. ‘Lost in Translation’ will hopefully bring some more cohesion to our com­munity, across distinctions of ‘domestic’ and ‘in­ternational.’”

Pratt expanded, “I began to comprehend how complicated cultural translation can be, and how often we don’t see its affects; two people coming from different perspectives can walk away from the same conversation with dramatically different perceptions of what was said.”

Even as someone who has lived in London his entire life with an American mother, Pratt still ran into complications once in America. He said, “For example, from my British perspective I would of­ten assume Americans are really happy, because Americans are a lot more expressive than Brits. In England if someone asked me how I was doing I would reply, ‘Alright,’ which in mild-mannered British culture would mean ‘good.’ And if I said I was doing ‘good’ with an enthusiastic smile, then my British conversation partner would probably assume I was having the greatest day of my life. So when I came to America and my American friends said they were ‘having a great day’ with an enthusiastic smile, I thought, ‘wow, their day must be going unbelievably well.’”

LIT hopes to bridge those cultural gaps by shar­ing the different perspectives of international stu­dents with the rest of campus. Hoyle said, “I am in love with ‘Lost in Translation’ as an idea because it really widens the spectrum of people at Vassar who are touched by VCTV. It is expanding not only the number and type of people who partic­ipate behind the scenes on projects like this, but also who will watch our productions!”

The first-hand experiences of international stu­dents in two very different cultures provides the perfect bridge. Pratt said, “What I’ve learnt from my time living and studying in America is that everyone has different worlds and perspectives to share, whether they live 10 or 10,000 miles from Vassar. I myself feel so grateful for the opportunity to live in a foreign country, as it has allowed me to be exposed to new perspectives that exist outside the limits of the English perspective.”

LIT consists of interviews from 25 students fo­cusing on the humorous side of cultural transla­tion. Co-creator and creative executive Dushyant Naresh ’17 said the interviews were designed to promote each person’s individual story while un­covering some of the humorous themes consistent across the experiences of international students.

Naresh said of the interview process, “Josh and I worked together to form questions that would make the students talk about their experiences without being too upfront about it–it was a tough balance to create questions that were funny and lighthearted while also addressing many of the is­sues internationals face.”

Though Naresh described strategic creation of questions, Busano added that no topic was off-lim­its. “We talk about everything, from the food to general cultural differences.” Busano went on to describe himself, “I’m from everywhere. I’m a man of the world.” As such, he delved into his take on the hook-up culture at Vassar.

Hoyle explained that enthusiasm like Busano’s was not uncommon. “There was a huge amount of enthusiasm and excitement from the international students who participated in our project. I think and hope that they really enjoyed getting to talk about their lives and stories and also being part of a real television production!”

Being an international student isn’t just about adjusting to American culture; there is also a need for adjustment to Vassar. “Sometimes I feel that we here at Vassar have a deficit of diversity with respect to opinions. It’s as though there is domi­nant opinion, or ideology and we’re all expected to conform to it or we pay the social price for be­ing mavericks,” Busano said.

He added that the diversity within the interna­tional student community at Vassar has helped him adjust to the differences. “That’s why I enjoy the internationals so much,” he said. “We’re a col­lection of mavericks, and I feel that without this community I wouldn’t have had the freedom to really decide what I think, what I value, what I be­lieve to be right, and I wouldn’t have had the space to grow to be who I needed to become.”

Pratt agreed that international students’ unique perspectives are something that everyone can benefit from. “Through my American and inter­national friends I have been exposed to worlds that were previously beyond my imagination; as a result my world has got bigger. I wanted to make a show that would expose people to different per­spectives and thus that would make their worlds bigger. We have an international community that comes from many different countries. They have experiences that may be unimaginable to people who haven’t lived in those countries. I wanted to give those perspectives a platform to be shared on.”