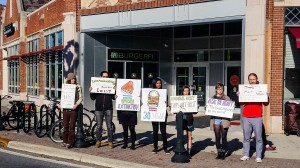 Vassar has a long history of student activism, a history perpetuated by organizations like the Vassar Animal Rights Coalition (VARC). By bringing prominent activists to speak on campus and by mobilizing student protests, VARC en­joyed relative successes in bringing non-human animal justice to the broader campus conscious­ness in the 1980s and early 2000s. The group is now reaching out once again beyond Vassar to gain support and insight from fellow animal rights activists around the world.

The third annual Students for Critical Animal Studies Conference was held on Nov. 20-21. This year’s organizer, Kaden Maguire ’16, explained, “The idea is to make it so that students have the opportunity to present work that they’re doing in their studies rather than professors or profession­al activists presenting work that they are doing as their career. Because they have the experience, it tends to allow them to dominate.”

The first SCAS conference was organized by Rockwell Schwartz ’15 in 2013, in conjunction with leader of the Institute for Critical Animal Studies Anthony Nocella. “The ICAS is an organization dedicated to an academic examination of the is­sue of the non-human animal, and it is intended to look at this issue in a way that other academic disciplines haven’t exactly given it the attention it needed in the past, in a similar vein as critical race studies,” explained Maguire. “The goal is to ideally have conferences and bring people togeth­er through academia to discuss all of the different intersections of the non-human animal in our so­cial and cultural contexts.”

The conference began with a discussion of the event’s origins, the history of animal rights activ­ism at Vassar and current issues on VARC’s radar, such as the semi-regular deer cull on the Vassar Farm. They also traded ideas about improving student activist tactics. The discussion concluded that Vassar organizations struggle with mobiliza­tion due to the lack of a strong activist culture on campus. The group also agreed that spurring ac­tivism on campus is difficult not only because stu­dents are busy with classes and extracurriculars, but also because they may be wary of backlash from the administration, which Schwartz experi­enced when organizing the first conference.

The next day students got a chance to imple­ment their ideas on effective activism, during a demonstration at BurgerFi restaurant. According to Schwartz, the students were inside the restau­rant for a matter of seconds before police were called. She asserted that although they would have had to leave when asked, the group had a right to protest in the restaurant. VARC mem­bers also protested there last year, criticizing the restaurant’s claim that they are environmen­tally friendly. Schwartz explained, “BurgerFi is a restaurant that has tried to market its product as progressive, but they don’t want their customers to think about the environmental issues.”

Saturday’s panels featured talks by Vassar stu­dents Alessandra Seiter ’16 and Maguire, as well as several outside speakers, each speaking about their area of expertise in relation to CAS. In line with the conference’s aim to elevate animal stud­ies to the level of other academic subjects, Brook­lyn artist and graduate student at CUNY Jan Des­cartes spoke about the use of animals in art. In her talk titled “Pleasure in Domination: The Role of Artist/Viewer in Jannis Kounellis’ ‘Untitled (12 Horses),’” she discussed several controversial art pieces featuring the death or harm of animals. “Historically, art is built on the backs of animals,” she began. “Animal byproducts are used for vari­ous parts of the art-making process.”

Descartes also addressed the fragility of the line between effective and offensive activism. “Animal rights activists entered the exhibit [‘Unti­tled’] on the penultimate day, with signs reading, ‘It’s not art, it’s animal abuse,’ and ‘End modern slavery.’ While animal rights activists were doing something, it’s problematic and inappropriate to use language such as slavery, [which] suggests a lack of intersectionality on behalf of the protest­ers,” she acknowledged. “It does no good to use polarizing language that only serves to fracture the distance between animal rights campaigners and their focus.”

PhD student of Sociology at the University of Basel Livia Boscardin also addressed the issue of effective, appropriate activism in her talk entitled, “The political ecology of meat: Topical facts and startling aspects of the animal-industrial com­plex.” She remarked, “Sure, it’s really nice to stay in our small, vegan-cupcakes wonderland…but there is a global reality of exploitation of human and non-human animals.” To her, activists should be less concerned with details like how many peo­ple they have turned vegan, and more invested in the intersectionality of systematic animal oppres­sion with other issues like workers’ rights, racism and classism. She said, “Be less arrogant, be more self-reflective and listen and learn from other people, and also help them in their causes.”

While the main focus of the conference was on methods of promoting and protecting the rights of non-human animals, the presenters and attend­ees did not ignore the connections between the imprisonment of animals for human use and the incarceration of humans in jails. The conference was rounded out by a workshop about writing letters to prisoners, especially marginalized per­sons who do not get much media attention. Or­ganizations such as the Anarchist Black Cross Federation, dedicated to support of political pris­oners and prisoners of war, and Black and Pink, which supports LGBTQ prisoners and fights the prison-industrial complex, have letter-writing programs and resources to promote solidarity with prisoners. VARC’s description on the VSA website affirms, “We understand speciesism as a social justice issue, and as such strive to align our efforts with other movements working toward a more just world, while respecting the uniqueness of all forms of systemic violence and the struggles against them.”