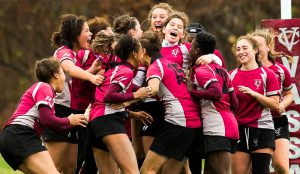 Until about a year and a half ago, Vassar College senior Min Chen knew nothing about the sport of rugby. On Saturday, she will be traveling with the Brewers down to Furman University in South Caro­lina to contend for a national title, as the Women’s Rugby Team makes their second final four appearance in just three years. The program as a whole has enjoyed incredible success under the helm of Head Coach Tony Brown and Assistant Mark Griffiths. Coach Brown has headed the team for 20 years, chalk­ing up 19 winning women’s seasons and 15 winning men’s seasons. This is a program that knows how to produce winners. This year’s se­nior class is entering the weekend sporting an incredible 51–13–2 re­cord over the last four years. Now, they turn their attention to one of the few accolades they’ve yet to re­ceive: a national championship.

Success and a winning attitude is nothing new for the Brewer women. In fact, many of them have been in the same position before. Two years ago, in the fall of 2013, while the current crop of seniors were soph­omores, many having just picked up the sport, the team traveled to Au­burndale, Fla. for their Final Four semi-final matchup against Notre Dame. That game remained close until the last 15 minutes saw the Brewers almost grab the lead before a costly turnover near Notre Dame’s goal line led to two quick tries against and the Brewers faltered, losing 39–19. They came out the next day and defeated Kutztown Univer­sity 24–15, finishing third overall in the nation. Just a year ago, Kutztown struck back, knocking off the Brew­ers in the final second of the quar­terfinal game. Nine players on this year’s team experienced both heart­breaking losses and are now ready to chase the title that has eluded them.

Junior flanker Nathalie Freeman was a first year on that 2013 team and is nothing but proud to be back here again. “I am so happy to be go­ing back to the Final Four. Last year, losing in the last play of the round of eight was so heartbreaking, and it has been so incredible to watch the team bounce back from that loss and play so well this season. I’m so proud of every single one of our teammates and being able to go back to the final four and show the nation what Vassar women’s rugby is all about means the world to me.”

For Chen, team support is what offers a chance at this title. “Honestly, I think the national title would take its meaning for me in the team context. All of us are intimately famil­iar with the bruises, scratches and sweat…that we’ve taken and shed in our journey here. My teammates consistently awe me and the national title would serve to further bind us together as a team both on and off the field.”

Freeman remarked upon the differences between this year’s team as compared to the 2013–14 squad. “I think that our team this year is very different than our team was in 2013. When I played in the Final Four for the first time, I was a freshman and a rookie, and many of the rest of the starters were also freshmen and sopho­mores. This year the majority of us starters are seniors and juniors, so [we have a lot] more ex­perience out on the field.”

This year, the women stand at 11–1 on the sea­son. Their sole loss was to the New York Wom­en’s Developmental XV, a women’s premier league team that actually featured two Vassar alums. The Brewers just dropped that match 22–24, after starting off slow and mounting a furi­ous but impressive comeback that just fell short. Despite the one setback, the Brewers managed to turn it into a positive learning experience. Fol­lowing their sole loss, the Brewers have won six straight games. Their loss came just before be­ginning Tri-State Rugby Championships as well, historically some of their toughest matches. The women swept Molloy College, Marist College and Rutgers University, outscoring their opposi­tion 261–10 over the three games.

Their closest game since their one loss came against Bowdoin in the Elite 8. The Polar Bears led 5–0 after the first 10 minutes but the Brewers maintained their style of play and kept pushing the Bowdoin team until Vassar managed to score an equalizer and then go up 10–5. The Brewers remained dominant and calm keeping the pres­sure on Bowdoin. The Brewers spent most of the rest of the game attacking while Bowdoin was on defense. The Polar Bears managed some strong play to start the second half, yet the Brew­ers never faltered and handled the attack before countering with another score 15–5. The Brew­ers’ defense was dominant and poised through­out, lending great support to the old adage, “De­fense wins championships!”

The sustained level of competition and the great amount of success the women have man­aged to find would be remarkable in any sport, but it’s even more impressive when you con­sider the fact that the program does not recruit players as most other teams do and they consis­tently compete against and defeat more “elite” programs and institutions that are able to recruit and even offer scholarships to their players. The vast majority of the Vassar College team had never seen or experienced rugby in any way be­fore being recruited to the team.

Freeman and Chen both explained how they became involved with the team. For Freeman, it was a big change during her freshman year but one she hasn’t looked back from after earning a starting spot her rookie year on that storied 2013–14 team. “I was recruited by the captain of the rugby team my freshman year when I was planning to run cross country and track. She convinced me to go to a rugby practice and after my first practice I knew that I should be playing rugby instead of running for Vassar. It has been such a nurturing and empowering experience for me and I’m so glad that I joined the team.”

Chen had a similar experience, crediting se­nior captain Taylor Nunley as well as Brown’s ef­forts as the reason she joined. “I guess you could say I was one of Tony’s successful gym recruits, I talked with him for a little bit while I was at the AFC and then also heard from a current player at the time (current co-captain Taylor Nunley), I gave the idea some thought and at the end of it all realized I knew nothing about rugby, [so I decided I] should at least give it a shot. I was already on campus for the summer so I was even able to join in on some pre-season training.”

Of course, without hard work and commit­ment from the players themselves, the team wouldn’t be where they are today despite the strength of their coaching staff. Having made the Final Four with such a young team in 2013, the Brewers continued building on that momen­tum and skill. It’s remarkable that the Brewers have had only one losing season in Brown’s ten­ure at the school. That one year, 2009–10 saw the Brewers drop from being National Division I contenders to barely having enough players to field a team. The team was riddled with inju­ries and played shorthanded at times. And even then, the team went 6–9–1, starting many rookies against some of the nation’s best. It’s a testament to the strength of the overall program and char­acter of the team as well as the fantastic coach­ing that three of the women that were rookies during arguably the team’s toughest season still hold three Vassar College records for most tries scored in a career. The next year, the team had eight returners and three upperclassmen rook­ies. That team went 14–4–1, taking the D2 Met­ropolitan New York Championship that fall and just missing out on a national qualifier after a 30–31 loss to BU. The resilience and strength showed by that year’s team has been echoed every year since, helping foster an incredibly strong program.

Freeman credits the team’s work ethic and targeted skills practice for their success this year. “I think that we have all been very dedicat­ed this season and the team has been very good at attending practices and training sessions. We have also adopted a few new patterns of play and focused heavily on certain skills such as inside defense and rucking. This work during practice is really evident during games and I think it has helped us a lot.”

Chen praised the coaches for their roles in creating a winning program. “I think a lot of credit would need to go to Tony and Mark for their wonderful coaching. Most of us start out knowing nothing about rugby and somehow they’ve crafted us into the successful team we are,” she said.