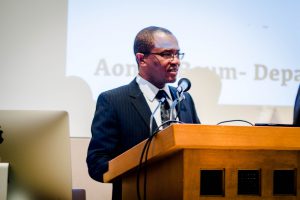 Professor Aomar Boum gave a lecture on Thrusday, Jan. 28 on the partnership between North African Jews and Muslims against French and Nazi German anti-Semitism from 1936-1940. Photo by Sam Pianello

Given the almost constant news coverage about the prolonged conflict in Israel and Palestine, the underlying divisions between Jews and Muslims which perpetuates the conflict seems to be eternal. However, as the research Professor Aomar Boum recently pre­sented shows, there have not always been strict divisions between these cultures. In fact, in many instances across the 20th century, Mus­lims and Jews have cooperated.

Boum is an anthropology professor at UCLA, specializing in “cultural, social, political and academic taboos in the Middle East and North Africa region” (info.vassar.edu, “Anthropologist Aomar Boum to discuss how North African Jews and Muslims partnered to fight anti-semi­tism in the late 1930s”, 01.28.16). He investigates the places of Jews within an Arab and Islamic monarchy, as well as historical shifts in respec­tive opinions the two groups has on each other (Stanford University Press Online, “Memories of Absence”, 2013). This relationship is what he focused on for this research study.

Boum spent six months at the United States Holocaust Museum researching the Holocaust in the context of North Africa, a relationship not widely discussed, focusing on the activities of International League Against Anti-semitism (LICA) between 1936 and 1940.

For his research, Boum referred to Nazi-con­fiscated Jewish documents, currently housed in the United States Holocaust Museum, that were recovered after World War II by the So­viet army.

Founded by French journalist Bernard Le­cache in Paris of 1927, LICA focused on fighting against intolerance and anti-Semitism during Hitler’s rise to power by calling on all mem­bers to boycott businesses connected to Nazi Germany. The organization still exists today, focusing on awareness against neo-nazism and Holocaust denial.

Over time by expanding social and politi­cal connections to non-jews, they gained wid­er support in the French population. With the spread of anti-Semitism through Nazi propa­ganda, there were increased tensions between the Jews and Muslims in the North Africa re­gion. The rise of anti-Semitic discourse in the French Algerian press ultimately led to the ri­ots of Constantine in 1934 where 34 Jews were killed. The leaders of LICA opened chapters of LICA in Algeria, Tunisia and Morocco as a re­sult of the tension, hoping to facilitate peaceful living between the two groups.

LICA was able to foster political mobilization and cooperation of Jews and Muslims against Nazi racism even during the heavy anti-Semi­tism during the Nazi era.

Boum concluded that even though LICA was able to successfully facilitate these relations for a while, it did not last for long. The amount of Nazi propaganda present in North Africa along with persistent anti-Semitic environment among the French settlers in addition to the sit­uation in Palestine ultimately prevented a lon­ger lasting relationship. Essentially, though co­hesian occurred in the relationship between the Jews and Muslims to form, it was short lived.

Associate Professor of History Joshua Sch­reier wrote in an emailed statement that this lecture is the Dr. Maurice Sitomer Annual Lec­ture and explained why Boum was chosen to be this year’s speaker. He explained, “The Sitomer Lecture Fund was endowed in 1984 by Mrs. Ar­lene Sitomer to honor her husband Dr. Maurice Sitomer. It is intended to support speakers who enlighten, inspire, and encourage understand­ing of Jewish culture.”

Schreir continued, speaking for the History Department, “We felt Professor Boum’s work, which has looked at how Muslims in Moroc­co remember their Jewish neighbors, most of whom left for Israel over the course of the 1950s and 1960s, would offer an unusual perspective and cover a subject with which few of us are very familiar. It would bring attention to what had been a very large, diverse and well-estab­lished Jewish community in the Arab-Berber world, as well as the complicated ways politics affects inter-communal relations.”

As the Jewish-Muslim conflict is an ongoing issue, Schreier hoped that students who attend­ed the lecture would understand the deeper his­torical intricacies of Jewish-Muslim relations.

He explained, “I hoped that students would take away a sense that relations between Mus­lims and Jews cannot be reductively character­ized as ‘bad’ or ‘good,’ but that specific histori­cal contingencies can create divisions, inspire collaboration, or even lessen the importance of the borders between communities. On a more basic level, I hoped students new to this topic would see how Jews were once understood (by Muslims, Jews, and Christians) as a fundamen­tal component in the fabric of North African society. Even though prejudices existed, Jews were not seen as outside the community of ‘real’ Moroccans, nor was the term ‘minority’ applied to them until more recently.”

He added, “It was wonderful to see so many students, faculty, and community members show up for a talk about North Africa, especial­ly given the fact that Syria, Iraq, and the Israel/ Palestine conflict are currently (and under­standably) dominating the headlines about the Middle East/North Africa region.”

More recent developments have narrowed the causes of tension between Jews and Mus­lims to be caused by the Israeli-Palestinian con­flict. However, it is important to recognize the cultural, political, and historical contexts that have shaped this relationship over time.

Carrie Coolidge ’16, commented that Boum’s lecture came at an important time for the cur­rent political climate on campus and in the pub­lic media. As she said, “Most mainstream media outlets portray conflict between Jews and Mus­lims as a force eternal. In reality, the two groups have a long history of cooperation. Boum high­lighted how Muslim groups in North Africa and France denounced anti-Semitism before and during the Holocaust. Boum’s point that peace­ful relations between Jews and Muslims contin­ued even during the era when the state of Israel was created.”

In addition, Coolidge, who is currently writ­ing her thesis on contemporary Manifestations of Anti-Semitism in France, felt grateful that the Jewish Studies department brought such an ex­pert lecturer in the field.

Boum’s expertise extends beyond his most recent research investigation at the United Ho­locaust Museum on LICA. Before this, Boum conducted in-depth research on a time-period much later. This research culminated in a book published in 2013 titled, “Memories of Absence, How Muslims remember Jews in Morrocco.” The book covers the depopulation of Jews in Morocco during the late 1970’s and 1980’s. To give some context, by 1980, 240,000 emigrated from Morocco, and today only 4,000 remain there.

Similar to his work on LICA, Boum’s early research focused on the oral testimony of ru­mor and story. Central to all Boum’s research is a deep analytical understanding of the shift in opinion about anti-Semitic belief. This yearning for knowledge is something many were glad to witness with his visit to the College.