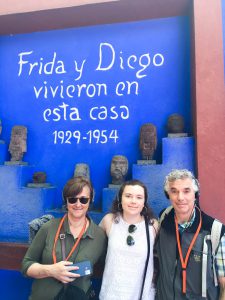 I muster whatever remaining energy my jetlagged self has in vocalizing my dinner order, hoping the waiter at least understands the gist of my rusty, elementary Spanish. It was our first night in Oaxaca City, Mexico. To say I was surprised would be an understatement when, thinking I had just or­dered chips and guacamole, I instead received a heaping plate stacked full of “champulines” (with some guacamole, on the side) in front of me. It did not take long for me to discover that the overly salted dish in front of me was a pile of grasshoppers, one of Oaxaca’s most famous delicacies.

During winter break, I was fortunate enough to take a family vacation to two of Mexico’s most famous, vibrant locations: Oaxaca and Mexico City. We spent the first four days of our trip in Oaxaca City, the capital of the state of Oaxaca, a city with cobblestone streets known for its food and artisan crafts. We stayed at a former convent-turned-hotel that sat four blocks from the Zócalo—the city center’s main square—and one block south of the Templo de Santo Domingo—one of the city’s main cathedrals. We spent the days exploring the streets, popping into local outdoor food and artisan craft markets. 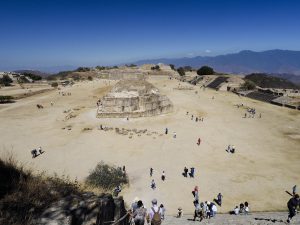 One day we took a guided tour just outside of Oaxaca City, where we explored Monte Albán, one of the earliest cities of Mesoamerica, and visited the studios of artisan craft makers, who carved animal statues out of wood and threw black earthenware pottery on wheels.

We spent the last days of our vacation in Mexico City, where the hustle and bustle of nine million inhabitants, occupying almost six hundred square miles, reminded me of Manhattan on steroids. Three days was not nearly enough to explore all that Mexico City had to offer, but some highlights included exploring the Anthropology Museum and touring Frida Kahlo’s house. 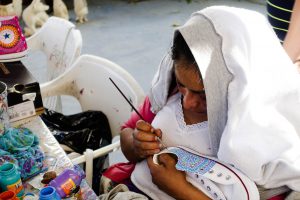 While my family was a little nervous at first about visiting Mexico City, we found ourselves feeling safe for the majority of the time. Although we got sick from the water, and were more than once mocked as “gringos” as we clumsily navigated the city’s metro, we discovered many ways in which the city is improving its security (e.g. reserving specific cars on the metro for women and children at night). Both Mexico City and Oaxaca City proved to be exciting, eye-opening destinations that I hope to someday return to. 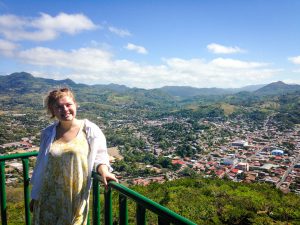 The mango incident occurred right in the middle of the two weeks I spent in Matagalpa, Nicaragua. I was there on the Evelyn Clark Memorial Travel Fellowship through the history department to hear and record a few women’s stories for my thesis. The city of Matagalpa, I learned, is sometimes known as “the land of eternal spring.” Given that colloquial title, I suppose that I shouldn’t have been so surprised by the flying mango.

I spent the first few days of my trip anxiously contemplating the inevitable failure of my project. I was worried about my lack of connections to women in the area, my highly imperfect Spanish language skills, and all the stresses that come from traveling in an unfamiliar place. 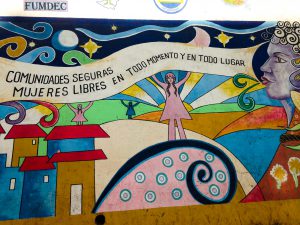 Even after I braved the offices of the women’s organizations asking for interviews, and even after I conducted those interviews, the trip was clouded by the particular feelings of anxiety that any thesis-writing senior can identify with.

It was only later that I realized what a rewarding and important experience it was to interview with seven different women who work for an array of women’s organizations.

One day, however, I was jolted out of my self-prescribed misery by what looked like a green blur flying its way into my lower-abdomen. I managed to catch the projectile before it hit the ground, and looked up 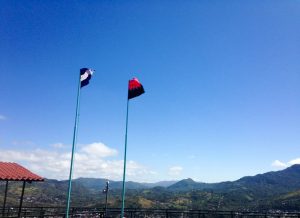 to see the shocked and concerned face of the man who had thrown the mango up the stairs just as I rounded the corner of the stairwell. As I walked out of the restaurant a few minutes later, still laughing and holding the mango I’d received as a peace offering, I was struck (this time metaphorically) by a wave of grateful relief.

My post-mango gratitude came from the liberation that only mild public humiliation can bring. Despite all the pressure and self-importance I’d internalized and projected onto the trip, I was, after all, playing tourist in a fresh and exciting culture. Those very nice fruit vendors saw me only as an unobservant gringa with a sense of humor about getting pelted with fruit. 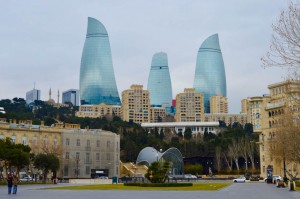 How can we reconcile our desires to see the world without being complicit in the crimes committed by the countries we visit, especially when those crimes include such massive injustices by gov­ernments against their own people? This was a recurring question on my mind this winter break as I traveled through Greece, Turkey, Azerbaijan, Georgia and Armenia. The answer I came to was pretty unsatisfying. But I’m not convinced there is a right answer to that question anyway.

I started thinking in earnest when I arrived to Azerbaijan. The country’s capital, Baku, is the model of a modern Western metropolis, with wide boulevards lined with luxury stores, clean and beautiful parks, big 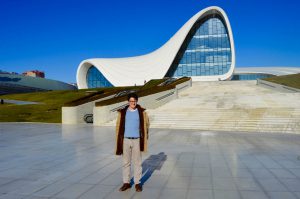 museums with interesting and varied collections and, most noticeably, prominent architecture. The recently opened Flame Towers, three massive glass skyscrapers in the shape of a flame, are the largest in the country and can be seen from anywhere in the city.

All this outward beauty belies the real situation in Azerbaijan, which is ruled by corruption and plagued with inequality. Currently, Azerbaijan is effectively an autocracy ruled by the powerful Aliyev family, who has been in power since Soviet times. The country’s rapid development in modern times has been fueled by the abundant natural resources of oil and natural gas found in its territory. The Aliyev regime has used this 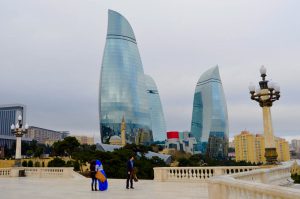 recent influx of money and resources to both cement their power, and enrich themselves to the tune of hundreds of millions of dollars. The government is notorious for jailing journalists and activists and torturing those who have to endure long and politically motivated prison sentences. In an unfortunate trend, the situation in Azerbaijan continues to deteriorate. Giorgi Gorgia at the Human Rights Watch recently said, “The government’s crackdown is unprecedented in the country’s post-Soviet history.”

None of this seems to bother the United States, a friendly ally of the regime, in large part because of oil politics. As a country, we are looking 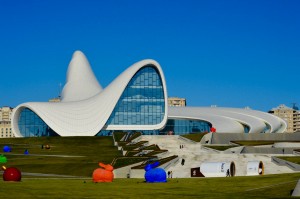 the other way for national gain. I came to the conclusion that, as a traveler, I wouldn’t. I realized that silence on the issues we come across while traveling abroad is actually the worst action we take.

I arrived in Baku a few days after oil dropped to less than $30 a barrel, a new low in an increasingly volatile energy market. The new trend spells an uncertain future for oil exporters like Azerbaijan who rely so heavily on the commodity to finance their governments. With the instability sure to result from low oil prices, can corruption keep its grip on the nation? How will this effect the world’s perception of the Middle East, which is lenient largely due to the historical power of oil in diplomacy?

Change lies ahead for Azerbaijan, and I hope the world is watching. 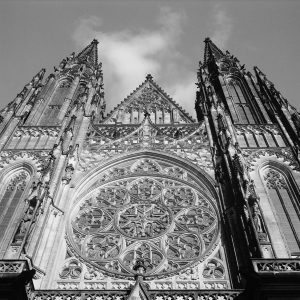 The day I arrived in Prague to study film at the Film and TV School of the Academy of Performing Arts in Prague (FAMU), I realized I knew nothing about Prague, the Czech Republic or Czech people. I only had vague notions of what to expect: cheap beer; churches everywhere; maybe I’d read Kafka.

Despite my ignorance, the “City of 1000 Spires” quickly won me over. With unlimited access to the trams, subways and buses of Prague, my friends at the film school spent days exploring the churches, parks and tastes that Prague offered up.

FAMU was located in a building just across from Narodni Divadlo (the national theater), on the banks of the Vlatava river. I thought that eventually the view of Prague Castle from school would grow old, but it did not, which made it much harder to concentrate during script critiques. Through my film program, I was able to get access to parts of Prague that few get to see, such as the Barrandov Stu­dios, often called 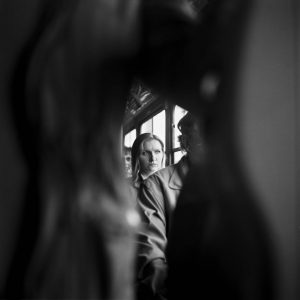 the Hollywood of Europe because of the enormous amount of Western blockbusters filmed there.

Czech culture and language took a while to get used to: “no” in Czech literally means “yes”; there are no articles in Czech, so when trying to speak English my professors would insert “the” and “a” into sentences completely at random; but as a spoken aloud language, Czech was just as beautiful as it was confounding.

Very few older Czechs spoke much English, which forced us all to become fluent in pantomime. Beer really was cheaper than water, which sounds thrilling at first, until you realize what this actually means is that water isn’t free and is by far the least popular drink in the Czech Republic.

Even though what I miss most are the slow days of reading endlessly in smoky cafes, Prague did not lack adventure. I once spent the day with 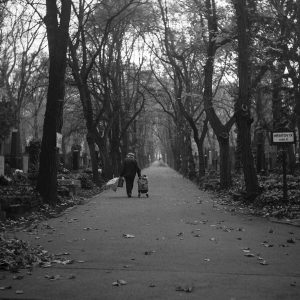 Elizabeth Fetterolf ’17 and some Prague friends sneaking into an abandoned Soviet military base, one of the only ones that is on (technically) public land. It took most of the day to get there, and the locals gave us plenty of suspicious looks, but it was entirely worth it.

Although I’ve already enjoyed my time back at Vassar immensely, Prague left an indelible impression that I will not soon forget. Na shledanou, Praha! (See you later, Prague!)