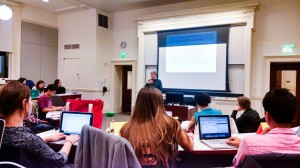 On Sunday’s VSA Council Meeting, Director of Institutional Research, David Davis-Van Atta gave a presentation of the key points in the findings from the survey “What Happens Here”. Photo by Jeremy Middleman

In January of 2014, the White House published a memorandum introducing the Task Force to Protect Students from Sexual Assault. Ac­cording to a statement on the Task Force’s web­site, “The prevalence of rape and sexual assault at our Nation’s institutions of higher education is both deeply troubling and a call to action.” This year, Vassar answered that call.

On Jan. 26, President Catharine Hill an­nounced in an emailed statement to the Vassar community that a collaboration of administra­tors and students had completed analyzing the results of the What Happens Here survey, an assessment of sexual assault on campus, which took 18 months to compile and analyze. In her email she wrote, “Last spring Vassar students were given the opportunity to participate in a survey focused on Title IX issues, specifically sexual assault and sexual misconduct on cam­pus. I am very grateful that so many of our stu­dents were willing to share their experiences and perspectives.”

In addition to the 1,171 students who re­sponded, many administrators and faculty were eager to participate in the project. “It ap­pears we have synergy. [We] have an adminis­tration that wants to take the lead on this, but we also obviously have the student body that was ready to fill out the survey,” commented Strauss-Swanson.

The group developed the survey in collabo­ration with a set of regional peer colleges, each of whom was free to add questions as they saw fit. Commenting on the process, Pereira noted, “We are obligated starting July 2016. [W]hen I interviewed for this position, I was actually very excited to join a campus that had really seemed to take the initiative on this well in ad­vance of this becoming a legal requirement. So to me that says that there really is a true invest­ment in wanting to be a positive difference well in advance of legislative signing edicts.”

Davis-Van Atta, along with the rest of the Survey Oversight Group presented the results of the survey to the campus on Feb. 1, with an additional presentation scheduled for Feb. 4. The respondents included 731 cis-women, 380 cis-men and 48 non-cis-identified individuals. Compared to other colleges that also adminis­tered the survey last spring, Vassar had one of the highest percentages of responses.

Strauss-Swanson noted in an emailed state­ment, “In many ways the survey results con­firmed what many have already suspected, but I am excited that we now have both quantita­tive and qualitative data regarding how sexu­al violence manifests on our campus. I’m also excited that we have more information, specif­ically from student narratives on the survey, to guide how we will continue to address this problem in our community.”

The biggest problem with the outcome of the survey, explained Davis-Van Atta, was the low rate of non-cis-identifying respondents, which rendered the data statistically unreliable and more difficult to accurately analyze. Students at Monday’s presentation showed concern for the underrepresentation of non-cis students.

Pereira responded, “That is certainly a con­cern of ours as well, and we do plan to have tar­geted efforts to look at the underrepresented groups that we saw in the survey, to figure out how we can get all students to really feel com­fortable talking about this issue. No one thinks that just because they didn’t respond that noth­ing is going on.”

Davis-Van Atta agreed, “That’s one of the disappointing outcomes, that the non-cis iden­tifying populations in the survey were so low. It’s hard for us to know what we wanted to learn from this. The intent is to do this [again] in spring of 2017; every other year, perhaps, if New York and the federal government will let us keep doing our own.”

Considering the small number of non-cis re­spondents, the data provided an even smaller sample size of non-cis participants who indi­cated on the survey that they have experienced sexual assault at Vassar. Non-cis data results were thus not included in the Personal Details of Incident Report.

The report demonstrated that the majority of cis-women and cis-men who have been sex­ually assaulted accused fellow Vassar students. About 90 percent of cis-women reported that the accused were cis-men, while a more equal distribution of cis-men and cis-women were accused by cis-men 50 percent and 42 per­cent, respectively. The numbers for cis-men and cis-women accused by cis-men changed to 46 percent and 42 percent, respectively, de­pending on if the incident was penetrative or non-penetrative.

Only about 10 percent of cis-women and about six percent of cis-men reported that they filed an official report with Vassar’s adminis­tration about the incidents they have experi­enced, which is on par with the national aver­age. Seven to 10 percent of alleged incidents for U.S. college campuses are reported. No Vassar participants reported their incidents to local law enforcement.

“The fact that students are choosing not to report any of these incidents to the police is concerning. I understand the fears and realities behind that choice and I believe completely that the [survivor] should have the option to report or not report to the police,” recognized Director of Safety and Security Arlene Sabo in an emailed statement. “However, at times tak­ing steps which preserve evidence can assist prosecution efforts if a [survivor] finds they have progressed in the healing process and would like to see criminal charges filed at a later date.”

Pereira later agreed, “It is my hope that the Vassar community will become more comfort­able with filing reports with the Title IX office if they need. I hope that the community recog­nizes that we truly serve as an unbiased office that seeks to remedy injustice while ensuring the rights of both parties.”

Assaulted students recorded a variety of reasons for not reporting the incidents, rang­ing from “Not clear that harm was intended” and “Did not think the accused would be found guilty” to “Wanted to forget it happened” and “Felt partly at fault.” The most common re­sponse for both cis-women and cis-men in non-penetrative incidents was, “Not serious enough to share.”

The survey results may be particularly diffi­cult to read for groups that try to prevent sexu­al assault. A CARES listener said in an emailed statement, “The findings of the survey are up­setting, and the administration needs to work considerably in supporting, believing in, and ensuring the safety and well-being of students. As a group that advocates for students affected by interpersonal violation… one positive aspect we learned was that, through the survey, many students were comfortable with expressing their personal experiences for the first time.”

Additionally, the data collected shows an overall decrease in the annual reported or experienced non-consensual penetrative or non-penetrative incidents for cis-women be­tween freshman and senior year. “We know that a very high-risk time for students is during their first years, specifically their first semes­ter, so we really focus a lot on our program­ming during orientation. We focus on online programs, an in-person event performance and then peer-to-peer workshops for all first-year students. Then we really like to focus on con­tinuing education, so we really made it a priori­ty to make sure that students in their four years at Vassar are continuing to receive workshops and trainings in addition to what they received during orientation,” said Strauss-Swanson.

In fall of 2015 SAVP conducted Bystander Intervention Student Trainings for many Vas­sar students, including student athletes, House Team members and students registered to host prospective students. Other prevention pro­gramming this semester included awareness raising events and social media campaigning. These efforts are scheduled to continue this semester with the addition of focusing specific attention on the LGBTQ community at Vassar and initiatives to engage men in conversations about these issues.

All involved with the survey project agreed that the most crucial outcome is the spread of both helpful and sobering information. Da­vis-Van Atta wrote, “Decisions made in the ab­sence of good information can be dangerous.” He continued, “Prior to this survey, the cam­pus community had little or no such compre­hensive, reliable, all-campus data. Missing this information makes for a general environment in which good informed discussion, as well as effective preventative campus information, programming, and resource development, is difficult.”

Strauss-Swanson agreed, “I think it is incred­ibly important to be 100% transparent about the results of this survey, to acknowledge ‘what happens here’ so that we can move forward to­wards improved prevention programming and services for our campus community.”

“Some [responses] were disturbing, disap­pointing to discover, very poignant, not for­gettable,” acknowledged Davis-Van Atta. “The information [the participants] provided, some of it surely not having been easy to recall or describe, I think must have been given in the hope that it would be informative…and in the hope of making a better campus environment for all, and a better college generally.” Grab added, “[D]oing the survey and analyzing the results is really just the beginning.”

The members of the Survey Oversight Group urge students to continue speaking out about sexual assault and violence incidents on campus, and to take advantage of the resourc­es available in SAVP and SART. Grab affirmed in her email, “All of our students have a right not just simply be here, but to thrive here. And when something happens that inhibits some­one’s ability to thrive, the College must address it.” President Hill reaffirmed the College’s commitment to combating sexual violence, concluding, “No level of sexual violence is ac­ceptable at Vassar, and we must do everything in our power to eradicate it.”