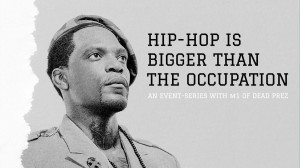 SJP and Jewish Voice for Peace coauthored a BDS Resolution that has led to a series of campus events. They aim to increase its awareness with students before the VSA votes on the resolution. Photo courtesy of SJP

Politics and art are often intertwined. But still, few look to paintings and performanc­es for political knowledge. With the newly formed BDS coalition, that might change.

Students for Justice in Palestine (SJP) and Jewish Voice for Peace coauthored a BDS (Boy­cott, Divestment, Sanctions) Resolution that is up for VSA approval on March 6.

“The movement started in 2005. It was a call from Palestinian Civil Society, which is about 170 different groups located within Palestine,” said SJP member Alexia Garcia ’18.

She continued, “We’re responding to that with the resolution. We made it public and the goal is to first pass it through the VSA and then call for endowment divestment from a number of companies.”

Since the resolution was written, a coalition of Vassar student organizations have come to­gether to rally support. “It’s really blown up in terms of student involvement. There’s a true coalition working to get this passed. We’ve had about 10 orgs represented at meetings and have a lot more students interested,” explained Gar­cia.

The coalition is harnessing this interest to increase awareness on campus. Part of this initiative is the Art as Resistance series, which features performances and art centered around resistance and oppression. The series is meant to make conversations on the Israel-Palestine conflict more accessible to students.

In the past, increasing awareness has primar­ily meant hosting lectures and academic events on the Israel-Palestine conflict. SJP mem­ber Sophia Steinert-Evoy ’17 explained of the group’s new approach, “As an org, we’ve been trying to build connections and coalitions with other orgs this semester, primarily through the BDS resolution.”

Garcia elaborated, “We’re trying to involve as many students as possible since this is going to be an all-campus vote. This is something the student government will vote on, on behalf of all the students so we want to involve people who might not come out to a VSA meeting or SJP event.”

The Art as Resistance series is the result of many of these collaborations. “We want to ex­hibit that BDS can and should be even deeper than the political and transcend to the cultural and artistic as well because occupation affects every part of life, so resistance should too,” ex­plained Steinert-Evoy.

The series is composed of several events, performers and artists whose work centers on nonviolent cultural resistance. According to Garcia, “It’s all kind of educational but it will approach the subject in different ways. We were talking about doing plays and hip hop and bringing in poets. We ended up calling it the Art as Resistance series because it encom­passed so much.”

The coalition looked to Vassar organiza­tions for help finding talent. “We worked re­ally closely with Hip-Hop 101 and WVKR to organize Art as Resistance and pull together a film screening and talkback with artists about solidarities and culture resistance,” explained Garcia.

“Music is inherently political,” said WVKR General Manager Kathryn Marshall ’16. “Mu­sical/lyrical content, taste preferences, every­thing—it all reflects larger social issues–from race, to gender, to class. Any shift in the main­stream genre is not some sort of innocent pro­cess. So, when SJP came to us about this event, it seemed fitting with the mission of the sta­tion.”

Garcia agreed that there is great potential to fuse entertainment and politics. “This campus has so much money and we should be using it in productive ways.”

For Marshall, engaging people in serious conversation through art is a step in the right direction. She explained, “It’s about time we talk about the way we use media/art/music as tools against forms of injustice, instead of be­ing mirrors of various social ills.”

Many of the Vassar organizations in the coa­lition helped secure student performers for the series. The group also found many off-campus performers with the help of outside organiza­tions. According to Garcia, “Organization is Resistance, whose whole thing is nonviolent cultural resistance from the U.S. to Palestine, was really crucial in bringing people to cam­pus. They’ve taken a number of trips bringing U.S. artists to Palestine to perform in refugee camps, teach breakdancing lessons and just draw out the solidarity using art as a form of resistance.”

The series is a concerted effort to include more voices in the conversation surrounding the Israel-Palestine conflict. According to Gar­cia, “I think it’s crucial to mix up the kinds of information you see. It needs to be relatable. This is a fun way to get the entire campus in­volved instead of just having the VSA vote and that be it.”

Marshall agreed, “It’s time for reflection and critical thinking. I am, along with other col­laborating orgs, supportive of conversations around dismantling oppression.”