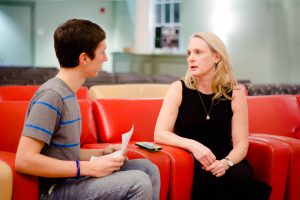 Piper Kerman is the author of “Orange is the New Black: My Year in a Women’s Prison,” a memoir about her life and experiences. The memoir investigates women entering the prison system, intent upon exposing the inhumanity and injustice that evades the public eye.

Q: What were the reasons for writing your book?

I came home from prison in 2005 after serving a little more than a year in the federal system, and what I found is that for me, as a person from an upper class family and going to a school like Vassar, very few people that I knew had much personal experience with the criminal justice system, and very few people had any experience with incarceration. People had a lot of questions. Like a lot of questions. It seemed to me that if I talked about my experience and the things that I witnessed that people might come away with a different sense of who is incarcerated and why they’re there and what it’s really like because what I found is that my own experience was very different from what I had feared and from what is typically portrayed, particularly in the news media. I thought that that’s important because there are many people who are in prison or have been in prison in this country and it’s a demonized and marginalized group of people, and returning to the recognition of the people who are in the criminal justice system is very important if you want to change the way that we approach these questions of crime, violence, victimization, accountability and punishment.

Q: Statistically, women are becoming the fastest growing population that are being imprisoned in jails and that’s something that you’ve talked about before. Why do you think that is?

Q: Would you say that those harsh penalties are unequally distributed to some over others? Such as across race or class divides?

There’s no question that race and class are the biggest determinants of someone’s involvement in the criminal justice system and not necessarily whether or not they committed the crime. I always say that the most unusual thing about my story is not that I committed a crime; we know that middle class people commit crimes, but they are just much less likely to be policed, prosecuted and punished in the same way that poor people and disproportionately poor people of color are treated in this country. You can go find two young men right now committing the exact same crime, and if one of them lives in a fraternity house or a dorm and one of them lives in public housing, I can guarantee they will be treated differently by the criminal justice system.

Q: Your book provides a heavy critique of the criminal justice system. It exposes systems of oppression and sexual abuse against the prisons and prison guards. Is the idea of a prison where people guilty of crimes are removed, is that an unjust idea or is it the way that it is administered by the US that is a problem?

I think that is a central question. The idea of a prison is something that we have in most societies around the world and it has a long history, though no society in human history has ever relied so much on prisons and jails as America has done in recent years to theoretically to solve its problems. The question of whether the exile of a prison sentence – sending somebody who has done something transgressive away from the community – is even effective is a really important question for all Americans to struggle with. Lots of people would argue that American prisons especially, but possibly all prisons are these incredibly hierarchical authoritative structures founded upon the principle of dominance and the threat of violence. If that is our response to violent crime, when we put people in places like that if we really expect that is going to do anything to change them or rehabilitate them, that’s a questionable assumption. It is certainly punitive, you can check that box. I would say that the last 30 to 40 years have been a policy of really immobilization and punishment. Like that is what American incarceration accomplishes. We immobilize them, we banish them and we punish them, but there is precious little rehabilitation happening.

Q: One message that you have explored is the impact of solitary confinement on one’s psychological state of mind. And that is something that has a particularly powerful effect on women. Why do you think it is even used if its effects are so awful?

Total isolation, solitary confinement, is the harshest penalty we have for human beings other than a penalty of death. Human beings are fundamentally social creatures and so when we completely isolate them from other human beings, that punishment has really profound effects on people, mentally, physically, psychologically, emotionally. The use of solitary confinement in America prisons and jails is sort of just carrying that idea of exile to an even greater extreme. That brings us back to the idea of harsh punishment much like the death penalty or sending children to die in prison. Why have we relied on it so heavily? Ill tell you one reason. American prisons and jails are filled to overflowing. I teach nonfiction writing to a men’s medium security prison in Ohio. It was built for 1,400 men, and there are 2,600 men living there. One of the things that happens when prisons and jails are so far over capacity is that it becomes more challenging to maintain order and safety and so the threat of solitary confinement is something that correctional staff turn to. When you have extreme overcrowding, you do have instances of violence and solitary confinement is used as a way to isolate people who have sometimes hurt other people or themselves but the thing that is very very important about solitary confinement is that the people who are most likely to be sent there are prisoners who are mentally ill. They have greater difficulty following the rules of a highly structured environment like a prison or jail and so what they face are these spiraling sanctions as they struggle to follow the rules. If you break the rules in the prison there are not that many steps that are taken before you are put in solitary. You don’t get a lot of chances before you end up in solitary confinement. And the impact of solitary confinement on the mentally ill is devastating.

I think that the world of prisons and jails is very intentionally hidden from the public view and I think anything that is hidden from us is interesting. Mass incarceration has been a public policy for a full generation now, for about 30 to 40 years, and I think more and more Americans are struggling to understand it. One of the values of personal narratives is that they help us understand these big complicated things in ways that data and academic approaches don’t always do. It would be a mistake though to think that any individual story can explain anything as vast and complicated as this sort of maze of prisons and jails that we’ve created in the United States. And I think that particularly a story from an upper middle class white woman can not possibly convey the whole story of American mass incarceration when race and class are such an important part of these bad public policy choices that we’ve made. I think the fish-out-of-water story that is a factor in my memoir, that is again a direct result of these confluences of race and class, is part of the hook, but my hope is that as people learn more about mass incarceration and about prison and jail, they become more and more interested in this incredible variety of stories. In this class that I teach in Ohio, we’ve read 22 memoirs by people who have been incarcerated, who have worked in prisons and jails, who have been touched by the criminal justice system very directly. And those stories, that breadth of stories are all first-person narratives. If you want to really understand things you have to have a lot of different points of view.