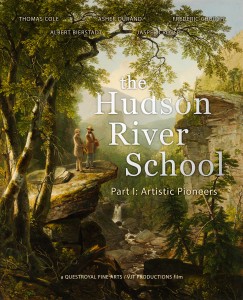 A new PBS documentary explores the history and art of the Hudson River School. It complements the Loeb’s newest exhibition, “American Stories” and lends a new perspective to the Hudson Valley. Photo courtesy of Vincent Tabone

While today’s Vassar students might not muse over Poughkeepsie’s beauty too of­ten, the story was quite different a few hundred years ago. The natural beauty of the Hudson River Valley was celebrated and explored by artists in the Hudson River School. And these works have always been welcomed on campus– when the Loeb opened, they composed the mu­seum’s largest collection.

A new PBS documentary, “The Hudson Riv­er School: Artistic Pioneers,” looks deeply into America’s first school of landscape painting. Vin Tabone was the impetus for the project. He explained, “I grew up along the banks of the Hudson River in Stony Point, N.Y. for 22 years and literally walked the shoreline as a kid in absolute wonder. I was always attracted to the streams and picturesque mountains near the Bear Mountain/ West Point area of the river.”

Tabone continued to experience the Hudson Valley well into adulthood. “As I grew up those were my high school haunts and I spent a lot of time there hiking and exploring. As an adult I would frequent the Cold Spring and Garrison area also (still do) and would venture as far north as The Catskills, Albany and Hudson, N.Y. where I would visit my uncle for some 40 years.”

These experiences set the foundation for a curiosity with the Hudson River School. Tab­one continued, “As I became exposed to the Hudson River School paintings I recognized a lot of the locations in the paintings as those that I had been visiting in the valley my whole life… That inspired me to seek out more knowledge about the artists and the story of their ‘school.’”

This exploration led him to create the 74-minute documentary. “I wore many hats for this project,” he explained. “I was the creator, writer, producer and director of the film.” With the help of a videographer, Tabone traveled the region interviewing the estates of famous paint­ers, gathering as much information as possible.

Tabone left a career at Sony Music before undertaking the project. He explained, “After Sony, I felt it was time for a comprehensive visual documentation about the Hudson River School, and I plan on this being a five-part se­ries.”

The documentary comes at the right time on campus. The “American Stories” exhibit de­buted in the Loeb on Jan. 29 and features many works from the Hudson River School that had been in storage for years. The Anne Hendricks Bass Director of the Loeb James Mundy ’74 ex­plained, “In this case [the premise] was to bring out on view some of our American Collection that has rarely been seen.”

The relevance to the Vassar campus wasn’t lost on Mundy. “I was able to track down an ear­ly photograph of the Raymond Avenue trolley by being in touch with the Trolley Museum up in Kingston, for example,” he said.

Tabone recognized the significance as well. He explained, “The history and the aesthetic from the region is reflected in the artwork of the Hudson River School, and it tells so many stories about the great changes that occurred in our country in 19th Century America.”

He continued, “Maybe most importantly their artistic message called for the conser­vation and preservation of the land that they loved and inspired them–so much so they felt the untouched, wild wilderness was a direct manifestation of the Divine. The information and visual illustration gives the viewer a sense of understanding of what came before them and how the country and the landscape evolved into what it is today.”

These works are so rich, even art histori­ans continue to uncover new aspects of them. According to Mundy, “By looking at the works carefully, new things occasionally surface as well. For example I never noticed the tiny sig­nature and date on the Milton Bellin Self-Por­trait contained almost microscopically on the tab of his jacket zipper.”

Mundy curated American Stories with his­tory in mind. He explained, “I tried to choose works that demonstrated historically what is “American” about the art produced in this country between 1800 and 1950 when such defi­nitions were to some extent clearer than they are today. And, I think, at a time when people thought more about such things.”

For Loeb Docent Josh Schwartz ’18, learning about these kinds of pieces before seeing them in person can be beneficial. He explained, “I think it depends on the type of art; a Rothko, for example, is intended to be experienced emo­tionally, so thinking about the background or history of the painting hinders that experience. Hudson River School paintings are beautiful, but historical context increases the viewer’s understanding of the weight of the work.”

He continued, “The American Stories exhib­it is curated to be explicitly historical, and to typify the differences between American and European art. Historical context is not only helpful in understanding the exhibit, but neces­sary to navigate the intellectual space of those galleries.”

According to Mundy, background is import­ant but seeing a piece of art in person is an experience that can’t be replicated elsewhere. He wrote, “To learn in a museum brings you together with the ‘aura’ of the physical object. It also takes greater advantage of your binoc­ular vision to express more clearly the impact of, let’s say, a painted surface that has a topog­raphy, that reflects light and creates color in a more complex fashion. Its an important com­plement to what we learn in the classroom and experience in other media.”

For Tabone, his documentary is one piece of the puzzle. He hopes it facilitates a larger expe­rience with art. “There’s no substitute to see­ing a work of art in person…To be inches away from something so personal and meaningful to an artist, and historical, still fills me with awe when I go to a museum. I believe a documen­tary like ‘The Hudson River School: Artistic Pi­oneers’ will absolutely inspire people to go see the artwork in person, and also visit the region where the inspiration and history actually took place.”