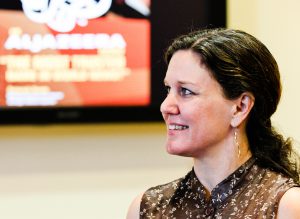 Former Chicago Tribune journalist Deborah Horan discussed her experiences reporting in the Middle East, as well as the history of the Arab Spring and its effect on the Middle East region. Photo courtesy of Furman University

On Feb. 10, communications specialist and for­mer journalist Deborah Horan lead a group of Vassar community members on a journey through her time working as a news reporter in the Middle East. “I’m going to speak a little bit about the background, for people who may not be familiar with the Sunni-Shia split in Islam,” Horan said, introducing her talk. “The religious divide has not spawned all of the problems, but it is a prism through which we can understand compet­ing forces…It started when the Prophet Moham­med died in 632 when his followers disagreed on who the successor should be. So most of the followers wanted someone named Abu-Bakr, who did want to lead the community, and a minority wanted Ali, who was the grandson of the proph­et.” The lecture, sponsored by the Dean of Faculty, was of particular relevance for students who want to learn more about the current political climate in different Middle Eastern countries. Horan de­scribed a 2011 article she wrote for the Chicago Tribune, “I write here that it is a time of hope and very rapid change, but it was very hopeful that there would be a wave of democracy across the Middle East.”

Currently, Horan works as a senior communi­cations specialist at the International Food Policy Research Institute, a food policy NGO. There, she works to provide media strategy and coverage to increase agricultural output and reduce poverty and hunger in developing countries.

Much of Horan’s discussion surrounded the interactions of Middle-Eastern countries, partic­ularly relations between Syria and the rest of the world. As Horan outlined, the Syrian government, which has attracted allies and militants from Shia populations, relies on support from Russia and Iran. The Syrian opposition forces depend on allies and militants from Sunni populations, with the implicit backing of the United States and Saudi Arabia (Bloomberg, “Truce Deal Backed by U.S., Russia Draws Skepticism in Syria,” 2.12.16).

Former President of the Middle-Eastern Stu­dents Collective and VSA President Ramy Ab­bady explained his thoughts about the importance of the region’s history for Vassar students. “It is important for people at Vassar to know and care about what is going on around the world,” Abbady said. Jorge Gruber ’18 echoed Abbady, “Whatever happens in the Middle East and in other world conflicts, we will feel the impact. Even though it seems like a distant affair, another Middle-Eastern conflict, it is not good to think that way. We are all affected.”

The lecture drew a wide audience, eager to hear directly from someone who had lived in countries that nowadays often make headlines. Gruber said of Horan’s lecture, “I would pay at­tention to the network of alliances, for example, those of Iran and Saudi Arabia. I know that they are the regional superpowers, and a lot of what happens is based on how they choose to engage with one another.”

Horan noted that outside pressures such as Western politics, including the U.S. invasion in Iraq in 2003, also played a part in regional poli­tics. In response to Horan’s discussion of foreign influence, Gruber said, “The story is very compli­cated. Although there are many different factors that drive the conflict, I see it as a power struggle between the major nation-states. The whole sit­uation is reminiscent of the Cold War dynamic.”

The U.S. and Russia recently traded accusa­tions of bombing the Syrian population, illustrat­ing that the Sunni-Shia religious conflict can often be an offshoot of regional and global politics. Syr­ian opposition forces and human rights organiza­tions reported that Russian airstrikes devastated Tal Rifaat in Aleppo province, even as diplomats worked to negotiate the cessation of hostilities (Reuters, “Russia keeps bombing despite Syria truce; Assad vows to fight on,” 2.12.16).

Horan noted that the Syrian conflict also in­volves Christians and the Kurdish national mi­nority. Considering a question from the lecture audience about underrepresented voices in the Syrian conflict, Horan responded, “The Christian population is on the defensive and they are flee­ing. That does not get a lot of coverage.”

Unbenownest to many students, the Syrian conflict has cost $255 billion to the local econo­my, and average life expectancy of inhabitants dropped from 70 in 2010 to 55 in 2015. Despite a 21 percent reduction in the Syrian population, the poverty rate has increased by 85 percent (The Guardian, “Report on Syria conflict finds 11.5% of population killed or injured,” 2.10.16).

Learning about world issues, Abbady asserts, is important for the campus climate. Abbady sug­gested, “We do have international students here, and I have repeatedly heard that international stu­dents do not feel entirely included as part of the community. Part of that stems from the fact that a lot of Vassar students do not try to understand events beyond the United States. We are living in an increasingly global world.”

These days, it has become increasingly diffi­cult for foreign journalists to work in the Middle East. Horan reflected, “Most of my colleagues are not going into Syria anymore. It’s too hard to get from one place to another for this reason: you will get militias on the freeway forcing cars to stop.” Horan elaborated, “This happened in Baghdad when I was there in 2004; we stopped going out­side to do reporting, because you couldn’t know if you could go on the freeway—it could be the militia had set up a temporary roadblock.”

The United States, Russia, Saudi Arabia and Iran recently made commitments at the Munich Security Conference to a cessation of hostilities in Syria on Feb. 19, 2016, after five years of war. Nevertheless, Horan expressed her skepticism of the possibility of peace coming to the region soon. Horan concluded her lecture, speculating, “The Lebanese conflict lasted for 15 years. The Syrian conflict has been going on for five years, but I would not be surprised if it continues another 10 years for the same reasons.”