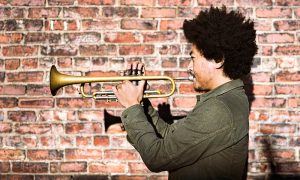 Musician Takuya Kuroda is set to perform a jazz concert in the Mug. ViCE Jazz hopes that his mix of classic and contemporary styles will draw big crowds and energize the campus jazz community. Photo courtesy of All About Jazz

Jazz is, in every sense of the word, cool. This upcoming Thursday Feb.25, ViCE Jazz will help the genre live up to this reputation.

With a new millennium, however, it’s easier than ever for pop hits and one-hit-wonders to overshadow what some consider an older style. Enter innovative contemporary jazz musician Takuya Kuroda.

For Kuroda, amalgamation is—surely—in­novation. This is his proposition and how he keeps jazz exciting and relevant in a changing music industry.

Native to Japan and currently based in Brooklyn, Kuroda is a trumpeter and compos­er who made his debut with his album “Rising Son.” He is best known for his involvement with José James’ band in the past few years. Kuroda and James acquainted themselves at Manhattan’s New School of Music at a mutual friend’s performance. James and electric bass­ist Solomon Dorsey recognized Kuroda’s talent and, soon, invited Kuroda to collaborate with him on his musical prospects. However, Kuro­da transcends his membership with the band through “Rising Son,” which features trombon­ist Corey King, keyboardist Kris Bowers and drummer Nate Smith,

Kuroda’s vast involvements were part of his appeal to concert organizer Juliette Boberg ’16. She explained, “I saw Takuya Kuroda at a Jazz festival in Brooklyn that I worked at in Octo­ber, and thought he would be a perfect fit. He is an incredible jazz musician but his music is still groovy and accessible to people who aren’t particularly into jazz.”

Boberg was especially drawn to the idea of a concert that would be relevant to all students, while bringing back the excitement of jazz’s glory days. She continued, “This show is to bring ViCE Jazz back to the old days when the org actually put on real jazz music shows, but we also wanted to keep it within our genera­tion’s music taste.”

Part of this taste includes the afrobe­at rhythms that influence his album “Rising Son” and his overall musical style. This is due in large part to his former membership with Akoya, a New York-based Afrobeat ensemble. Kuroda utilizes Afrobeat and blues, which is also due in large part by Kuroda’s influences, including Clifford Brown, Miles Davis and Lee Morgan. Another influential figure in Kuroda’s career is Afro-Cuban DJ Mala, who helped cre­ate a conduit into the realm of DJ culture. Kuro­da also incorporates many elements of funk in his music.

Born and raised in Kobe, Japan, Kuroda ar­rived in the United States in 2000. While in Japan, he followed the footsteps of his older brother, a trombonist, and joined his junior high school jazz band before continuing to play in college jazz bands. But for Kuroda, authentic involvement with jazz did not begin in school. Instead, the local jazz scene with the smaller combos is where it all happened. “I never had a jazz music teacher in Japan. I took my first music theory, ear training and jazz ensemble classes for the first time of my life in English, which made it even crazier,” he wrote on his personal website.

He continued, “I sat in with a lot of the el­ders on the local scene. They showed me so much love.”

For Boberg, Kuroda’s classical training and informal experience create a powerful story. “Takuya is a trumpeter from Kobe, Japan, who went to school at Berklee College of Music and has since gotten very involved in the vibrant NYC jazz scene,” she said. At Berklee, Kuroda was exposed to structured and technical train­ing that would shape his future style.

His foray into the New York City jazz scene was largely successful. Boberg continued, “He has worked closely with musicians such as Jose James, and was signed to Blue Note a couple years ago (Blue Note is a huge jazz music label so that is a pretty big deal). He is incredibly tal­ented and should put on a really good show!”

Kuroda still maintains some more classical elements of jazz, but he blends traditional jazz elements with the funk and groove of more modern groups. He, in turn, makes jazz more accessible and digestible to the audiences of the 21st century. His album “Rising Son” was a manifestation of this syncretic attempt.

For many, Kuroda’s concert marks an excit­ing uptick in interest on campus in jazz music. According to Ilan Korman ’19, “It is really excit­ing to see ViCE bring a jazz performer. I think that the jazz community on campus is definite­ly growing and it seems very likely that our music department will expand to offer more jazz classes. I hope that there will be more con­certs like this one, which open up a completely different universe of music on campus.”

Samuel Chiou ’18 also appreciates the at­tempts to revive and sustain the past. He ex­plained, “I’m impressed that vice is bringing Takuya. I’ve always listened to the jazz classics growing up, so it’s nice knowing that people still appreciate this genre.”

The ViCE Jazz event will open with FAQ Section, one of Vassar’s own student jazz com­bos, including John Winton ’16, John Mason ’16, Pieter Block ’18, Lena Redford ’18 and Zack Wilks ’17.”They are a really, really great group of musicians. I’ve heard that it’s going to be a great show,” said Gusmano. The event will take place this Thursday, Feb. 25 at 9:30 p.m. in the Mug.

According to Albie Pepe ’16, “Takuya Kuroda is one of my favorite contemporary jazz musi­cians. His jazz-funk screams style. I’ve actually used a few songs of him in film projects before. I’m happy Vice Jazz is finally supporting actual jazz musicians as opposed to ‘danceable mu­sic.’” Pepe’s indirect encounters will soon be realized on campus.