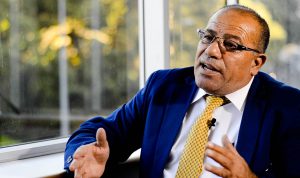 On Feb. 17, Director of the Palestinian Human Rights Monitoring Group Bassam Eid lectured on why he thought the BDS movement is going to hurt Palestinians more than it will help. Photo courtesy of YouTube

The swirling storm of controversy over the Boycott, Divestment and Sanctions (BDS) movement has been further fueled by Founder and Director of the Jerusalem-based Palestinian Human Rights Monitoring Group Bassam Eid’s lecture on Feb. 17. The Mar. 6 VSA Council meeting will determine the VSA’s position on a BDS resolution submitted by Students for Justice in Palestine (SJP). The BDS movement is meant to urge and force the Israeli government to dismantle the wall, end its control over Arab lands and institutionalize the rights of Palestinians (BDSmovement, ”Introducing the BDS Movement”).

As the campus struggles with this momentus decision, there have been numerous events designed to promote awareness of and support for the BDS movement, including 11 events this month alone.

Storch said that responses to the lecture have been largely positive. “I’ve received a number of ‘thank you’s’ and ‘we needed this new perspective on campus’ from students and faculty.” However, not all students were satisfied with the choice of speaker. “I am disappointed that Vassar would bring a speaker who presents a complex issue like the Israeli-Palestinian conflict so simplistically as to blame the Palestinian Authority exclusively for the Israeli occupation without even mentioning the astronomical number of human rights violations committed by Israel towards the Palestinians or the clearly unequal power dynamic in the Israel/Palestine relationship,” asserted Paul Kennedy ’19, who attended the lecture. “Such a gross misrepresentation of the conflict disgraces the ideal of dialogue that Vassar seems to value so highly”.

Eid’s presence on campus threatened some students’ emotional security. An anonymous member of SJP and the Middle Eastern Students’ Collective opined, “I thought that the bringing of [a] Palestinian activist that advocated against BDS was tokenization of his identity to validate certain specific groups on campus and their politics, in a very racist way that capitalized on his identity as a Palestinian. They mentioned that while they did not actually attend the lecture, multiple friends identified the lecture as a targeting of certain identities on campus. The student said, “As a Middle Eastern student at Vassar and as an Arab student at Vassar, that made me really uncomfortable. Also the fact that the President funded that also showed where the administration supports some students and calls out certain kinds of racism and ignores other kinds of racism on campus and, in fact, actively supports it.”

The proposal to bring Eid to campus was met with resistance by some student orgs. With the help of Associate Dean of the College for Campus Life and Diversity Ed Pittman, Storch found the Dialogue and Engagement Across Differences fund to sponsor his event. As part of an initiative to strengthen Vassar, the President’s office created this fund to support programs that examine controversial issues facing Vassar and society at large (Office of President, “Letter from President Hill on grant program available for innovative programming”). President of the College Catharine Hill wrote, “Bassem Eid brought important perspectives that widened how Vassar is examining the Israeli-Palestinian conflict. I also appreciated the very substantive exchange of questions and answers between the audience and Eid.” On March 3, the fund is presenting Jewish journalist Peter Beinart as a counter to Eid, but some students feel that this is not supportive of the goal of the fund as the two speakers share the same political ideology. SJP and JVP member Henry Rosen ’17 clarified, “Identity and politics are intertwined. What I am trying to suggest is that the fund thinks that they’re inviting difference when they’re inviting two different identities, regardless of political differences.”

“What I want people to take away from this event,” remarked Storch, “is that BDS, Israel, Palestine and a lot in between are much more complicated than I believe some of the speakers we’ve had have indicated. It’s very easy to say ‘this side bad, this side good, we hate the bad side,’ but I think Vassar students are smart enough to know that easy answers aren’t always the best answers to such tough questions as what to do with [Israel and Palestine]. The idea that a Palestinian man would condemn the Palestinian Authority as well as BDS shows just how diverse opinions are on this issue from all sides.”

Administrators recognize a need for dialogue between groups. Dean of the College Chris Roellke wrote in an emailed statement, “Several more campus events in the coming weeks and months will seek to tackle these and other important issues around the globe. My hope is that divergent and even controversial perspectives can be shared and debated in the vibrant and respectful intellectual environment Vassar seeks to afford its students and faculty.”