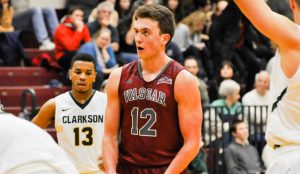 Despite their best efforts, the men’s basketball team fell to RPI 71-63 this past Sun- day. Luckily the team had already secured its spot in the Liberty League Championships. Photo courtesy of Vassar Athletics

The Vassar men’s volleyball team improved its record to 11-2 on Saturday after defeating two United Volleyball Conference teams, host Penn State-Behrend and Bard College. The squad, now ranked No. 10 in the latest American Volleyball Coaches Association Poll, defeated the Lions 25- 13, 25-16, 25-27 and 25-23 before besting the Rap­tors 25-12, 25-12 and 25-16. Despite dropping the third set, Vassar generally held the upper hand throughout the first match. The Brewers sped through the first two sets, leading the Lions by as many as nine points and accomplishing a total of 27 digs, seven of which came from sophomore middle Matthew Knigge. Behrend came alive in the third, fighting off two match points and ulti­mately taking the set as Vassar put up its lowest side out rate of the match at 59 percent. Kriz fin­ished of the close fourth to earn a team-best of 15 kills and push the Brewers to 1-1 in the UVC. In its second match, Vassar had a more comfortable victory against Bard College, only allowing 13 kills from the Raptors. The men travel to New York City on Feb. 23 to take on the always-challenging Violets of New York University at 7:30 p.m. for another conference matchup.

Despite putting up a strong fight, the Vassar men’s tennis team fell 6-3 against reigning Lib­erty League champions No. 24 Skidmore College on Saturday. Vassar’s number one doubles pair, senior Daniel Cooper and freshman Nick Zuczek fell 8-4, while number three doubles pair, junior Nick Litsky and sophomore Gray Thurstone lost 8-3. Second doubles team, senior Evan Udine and junior Alexander Luckmann had the closest con­test, leading Skidmore’s Jonah Epstein and Kit Sanderson 5-4 until getting broken and ultimate­ly falling 8-6. At number two singles, Cooper set the tone for the men with a quick win of 6-3, 6-2. Junior Juan Felipe Laso earned another win for Vassar at four, 4-6, 6-3 and 10-8 in the tiebreaker. Freshman Nick Lee won the last match of the day at position six, besting Ted Berkowitz 1-6, 7-6 (7- 5) and 11-9 in the tiebreaker. Litsky had arguably the most intense match of the day at one singles. The two battled hard in the first, with Litsky pre­vailing 7-5. However, he then fell in a third set su­per breaker 14-12. The loss puts the Brewers at 3-3 overall and 0-1 in conference play. Vassar travels to Rochester, New York to take on the University of Rochester on Feb. 27 and Rochester Institute of Technology on Feb. 28.

The Vassar College women’s tennis team trav­eled to Allentown, Pennsylvania on Saturday to take on Muhlenberg College. The Brewers had an easy 9-0 victory against the Mules, moving to 3-1 overall. Senior captains Kelsey Van Noy and Lauren Stauffer set the tone for the Brewers win­ning 8-1 at number two doubles. Number three pair freshman Morgane Flournoy and sophomore Morgan Fitzgerald followed, winning 8-2. Juniors Shayna Becker and Hanna McGuire swept the doubles for Vassar at one, winning 8-1. The wom­en’s strong play carried over in singles as Flour­noy won 6-3, 6-1 at three. Becker clenched the match with a double bagel at four. Sophomore Kate Christensen had a 7-5, 6-4 win at one while sophomore Courtney Geiss finished with the same score at two. Junior Connie Yoo collected the team’s second double bagel at the sixth spot while sophomore Dasha Ivenitsky closed out the match against Levenson 6-2, 6-2 at five. The Brew­ers travel to face two Liberty League competitors this weekend, Rochester Institute of Technology on Feb. 27 and St. Lawrence University on Feb. 28.

In the final game of the season on Sunday, the Vassar women’s basketball team defeated Rens­selaer Polytechnic Institute 88-74. With this win, the team boasts the second-most scored points in program history and finishes the season 10-15 overall and 7-9 in Liberty League play. The Red Hawks started the game in control, leading the Brewers by seven at halftime. However, the tables turned in the third quarter when Vassar scored 15 of the final 19 points of the quarter. Sophomore Ariella Rosenthal’s jumper tied the score at 52 and she later gave the Brewers the lead after another two-point conversion. Vassar continued to dom­inate in the fourth quarter, taking at eleven-point lead with roughly one and a half minutes remain­ing. Unable to answer, the Brewers captured the win. Rosenthal shot a career-high 30 points while senior Caitlin Drakeley contributed 16 points and eight rebounds. Senior Rose Serafini also played a large role in the victory with 13 points, eight re­bounds, three blocks and two steals. The squad ended its season seventh in the Liberty League and therefore did not qualify for the Liberty League Championships.

The Brewers traveled to Troy, N.Y. this past Sunday to take on Rensselaer Polytechnic Insti­tute for their final game of the season. Although hard-fought, the men could not gain enough mo­mentum to defeat the Red Hawks, falling 71-63. Vassar stayed in close proximity to RPI through­out the first half and finally took a three-point lead with four and a half minutes to go. The two teams continued to trade off the lead for the re­mainder of the half, with Vassar edging out one point ahead 35-34 at the buzzer. The Brewers and Red Hawks continued to evenly battle for the ma­jority of the second half. At about the six-minute mark however, RPI started to dominate, increas­ing their lead to seven, then ten points. Vassar could not match RPI’s accelerated play, ulti­mately losing by an eight-point margin. Browne carried the Brewers with 22 points while senior captain Erikson Wasyl and junior Mickey Adams both contributed 11 points. The men, now 12-13 overall and 8-8 in conference play, were tied with Rochester Institute of Technology for the fourth and final spot in the Liberty League Champion­ships. The Tigers lost to Union College in their final contest on Sunday as well, which actually pushed the Brewers ahead to earn the fourth spot for championship play. Vassar will face Skidmore College in the Liberty League semifinals on Feb. 24.