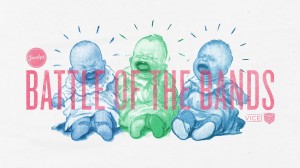 Joss is hosting the third Battle of the Bands this weekend. The event offers students an exciting competition to watch as well as giving student bands a much-needed platform to perform. Photo courtesy of Facebook

You’d be hard pressed to find two things more universal to humans than music and competition. Groups of people from Russia to Brazil have their own forms of music. Those same cultures throughout history have all com­peted in some way or another. So, being the creative beings that we are, it’s only logical to mix the two together. While some people might tune into the new season of American Idol, Vassar students won’t have to wait through any commercial breaks to get their fix of musical competition. On Saturday, March 5 they can just head to the Susan Stein Shiva Theater at 8:30 p.m.

Josselyn House is hosting the event, which is now in its third year. According to Joss House Team member Sasha Israel ‘18, “Well it’s defi­nitely been a very collaborative effort. We have an amazing president who’s been working real­ly hard to organize everything and put every­one one house team to work.”

Israel continued, “We are really excited to have a good mix of judges this year that in­cludes underclassmen who will listen to the music through fresh ears, and we just want to try to cultivate a really big and energetic audi­ence for the bands through advertising.”

The performances will all be by students and cover a wide range of genres and styles. There are a total of four groups performing: Portrait Day, The Live Ins, Quota Lee, The Run to Earth and Lizard Pile.

Don’t be expecting one genre to dominate the performances like in a traditional concert or other campus musical events, however. Few competitions bring together everything from EDM to Punk Rock and promise to crown a winner by the end of the night. According to Is­rael, this diversity was part of the plan. “We’re also pumped because we have a wide range of genres in the lineup, so there’s kind of some­thing for everyone,” she said.

The five performers will go on one after the other. The winner will receive ultimate brag­ging rights. This is the third annual Battle of the Bands, and some of these bands have per­formed in the event in years past. And while some bands that have performed in years past aren’t performing this year, there are brand new performers that are participating this year to keep things fresh.

One of the performers is Quota Lee, the hip-hop persona of Dakota Lee ’19. According to Lee, “This will make my second hip-hop per­formance after the Hip-Hop 101 event last se­mester which was Four Pillars. I love perform­ing music and hip-hop is something that comes directly from my soul. I have a deeply personal relationship with the genre.”

Lee draws influence from across the history of Hip-Hop, ranging from modern MCs such as Kendrick Lamar or Tyler, the Creator to bona fide classics such as A Tribe Called Quest as well as RDGLDGRN and Tech N9ne. Despite influences from some of hip-hop’s best, Lee brings a new fusion to the table. He explained, “My style is uniquely mine. I haven’t ever really heard anyone who does things quite like me. I tell stories. I make references. That stuff is ob­viously normal in hip-hop, but my flow and my lyrical style are mine.”

While events like Battle of the Bands are fun for audiences, they provide much needed op­portunities for artists to perform and improve. Lee explained, “The event is also good practice for the Throwback Festival happening in April (another Hip-Hop 101 event). There is not real­ly just a whole lot of chances for hip-hop artists to perform on campus, so I take any chance I can to showcase my abilities.”

Run to Earth member Cole Fisher ’18 is also set to perform. His group is composed of him along with Ernie Suarez ’18 and Jack Fischer ’18. The Run to Earth is an Indie folk/pop outfit. According to Fisher, “All of our songs are orig­inal compositions so that’s a pretty significant part of our identity. It’s been a really interest­ing project for Jack and I as we come from very different musical backgrounds. I write a lot of acoustic, melodic indie folk/pop while he comes from a background of much more in­tense pop punk.”

Fischer is also in another band performing in the battle of the bands: Lizard Pile. This group consists of the aforementioned Jack Fischer along with Max Frank ’18, Ben Luongo ’19 and Oriana Catton ’17. Where Run to Earth is more acoustic and melodic, Lizard Pile is electric, energetic and loud.

Lizard Pile is a punk rock band, and draws influences from groups such as Brand New and Counterpart. According to Fisher, “In my opinion [Lizard Pile is] very likely to win, and I think the difference between our two styles will be made pretty apparent.”

But Fisher isn’t too worried about these musical differences. He explained, “Those [genres] are pretty hard to compare, but I think everyone is really excited just to play in front of a large audience and get our sound out there.”

The event provides opportunities for audi­ences and bands alike. Framing the concert as a competition between groups allows for a great diversity in musical styles and gives student performances equal chance to perform than say an event that is strictly for hip-hop or just as opening acts for other bands.

According to Fisher, “We are super excited to be playing in battle of the bands. This will be Ernie and I’s first year in the show, but I can tell you what I’ve observed so far. This year’s Battle of the Bands feels a lot less like a competition and more like a diverse showcase. This year we’ve got EDM, indie folk, hip hop and punk rock all rolled into a single show.”

The judges have no easy job—with so many different performers, it will be hard to crown just one band the “winner.”