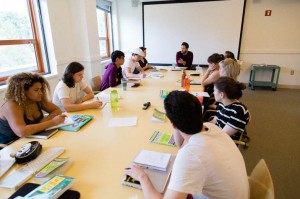 Students work together in a seminar to workshop, plan and organize their scripts for their rapidly approaching deadline. For many seniors, the weeks after break mark the final draft deadline. Photo courtesy of Joseph Muszynski

Seniors are nearing that time: their last last week before spring break (their last) which will shortly be followed by their last first day back after their last spring break. Among all these lasts are a few firsts: their first grad school accep­tance, their first decisions not revolving around whether to go to the Deece or somewhere else, their first senior thesis. For the four seniors work­ing on the screenplay thesis, next semester will bring their first semester free of the grueling work they have been putting in all of this semes­ter with help from Adjunct Instructor in Film Jo­seph Muszynski.

Throughout the semester, senior Film majors who are completing theses in Screenwriting have been constructing their screenplays individually, with input from each other. Film major Samantha Smith ’16 described the process, saying, “We all write our own scripts but meet every other week to workshop each other’s scripts, give each oth­er feedback and help answer any questions any writer may have. It’s pretty separate but it’s nice to all get together and help each other write the best scripts we can. I’ve found that feedback is incredibly important in screenwriting.”

Muszynski explained the structure of the the­sis, saying, “A screenwriting thesis is structured similarly to an independent study; however the workload is more intensive. By the end of the semester, the student is expected to complete a 90-120 page screenplay, plus a critical introduc­tion to their project, which serves as a theoretical companion to their work. They also must write a ‘treatment’ (synopsis) of their screenplay.”

Reflecting on her screenwriting process, Lindsay Lucido ’16 said, “For the screenplay the­sis we need to write a feature-length script. We must also write a treatment (which is basically a summary of what happens) and a critical intro­duction, which talks more about the importance of the topic and incorporates any reading you’ve done on the topic.”

That topic is a historical fiction of each stu­dent’s choosing. Muszynski explained that while he is there to help, the students do the bulk of the work, “Students who work toward a screenwrit­ing thesis have already demonstrated the funda­mentals of screenwriting, and therefore my role is that of a creative mentor or guide. I may help the student to generate ideas for their story, but the story is theirs.” Smith explained, “Our thesis advisor asked if we were interested in doing any historical fiction work and for me, my favorite moment in history has to be when Eartha Kitt, James Dean and Paul Newman had a threesome at a dance studio,” Smith explained.

She went on, explaining why her interest in the topic: “One, because no one knows it happened, I’m always asked if I made it up, and two, because what a good, classic Hollywood story. Now I get the chance to tell it and it’s been a lot of fun.”

Taylor Nunley ’16 explained that her own thesis has more personal roots. “My screenplay is about Susan ‘Susie’ King Taylor, the first Black Army nurse during the Civil War,” she said. She added, “I come from a family of Black nurses, which is what attracted me to Susie’s story. Despite this, I was very nervous about the prospect of conduct­ing extensive research on her and writing a film about her all in the course of one semester.”

As the thesis advisor, Muszynski explained how he helps students’ processes. “In ways, my role is similar to that of a creative producer: I am there to facilitate the creative process. This means that I sometimes serve as a sounding board for the student to brainstorm and talk through their ideas; but I also provide the student with films, literature and other screenplays to study in order to inform their own project,” he said.

He went on to add that constructive criticism is another way he assists students. “Additionally, I act as a story editor, and I help to identify chal­lenges or problems in their screenplay. These is­sues may be structural, theoretical or dialogic in nature, for example. Like the student who under­takes a thesis in screenwriting, I also must wear many hats!”

Nunley spoke to Muszynski’s role in her thesis topic saying, “I was much more inclined to write on one of the fictional topics I suggested. At the end of the day, though, Professor Muszynski convinced me that this idea was the most poten­tially marketable and I reminded myself of how important it is to tell the stories that aren’t being told.”

Nunley still has a lot of work to get through before next semester. “Our first full drafts are due in the middle of April and the final ones are due in May. It’s a one-semester thesis which can feel stressful at times but we have deadlines set up each week that helps keep us on track.”

While the thesis does not officially begin un­til the spring semester, the students have already been hard at work since the fall. Nunley said, “Professor Muszynski required us to come up with roughly eight ideas for a screenplay over winter break. He gave us feedback on them and worked with us to choose the ones we would ac­tually work on.” In addition, she said, “I’m trying to write a little bit every day, an admittedly slow­er process than usual since I have to constantly do research before producing any content. But as long as I produce roughly 10 pages per week, I’ll be fine.” Smith has a similar approach. “I’m currently looking to complete two scripts this semester so my current script about the three­some should have a complete first draft by spring break,” she said.

There is already plenty of excitement before their last first day on campus after their last spring break for these seniors working on the film thesis. Some have high hopes for where they can go with their screenplay. Nunley said, “There will never be a shortage of superhero films, for example. But the story of a young Black woman excelling in what is remembered as an older white man’s world is sadly in short sup­ply.” Muszynski added, “There is a tremendous amount of demand for content in the world. We would love to see more and more Vassar students become prominent storytellers in our shared cul­tural space.”