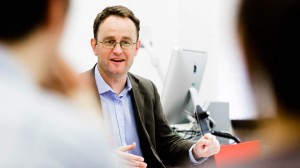 More than 100 years after the First World War began, its effects still linger on. On Feb. 25, days after the anniversary of the start of the bloodiest battle of the war, University of London Professor Richard Grayson gave a lecture titled “Military History from the Street: New Findings in Ireland’s History of the First World War.” He focused on the contribution of volunteers from Belfast, the capital of North­ern Ireland, as part of the British army.

While most academic treatment of the war in the UK centers around Britain, Grayson chose to concentrate on Ireland, in part due to familial connections, and in part because it is a demo­graphic not often well-remembered in academia. Grayson’s lecture demonstrated the difficult task historians face in seeking to faithfully record de­tails of such an overwhelmingly large conflict. He sorted through thousands of army records and newspapers to find accurate information about soldiers from Belfast.

The politics involved in the War, which still fla­vor the national atmosphere today, are complex, and mostly centered around the approval or dis­approval of Home Rule–whether Ireland should be a sovereign nation. Republicans advocate for a free Ireland, while Unionists, sometimes termed Loyalists, desire one united nation, generally un­der Britain. The creation of Northern Ireland, a separate country from both nations, came as a compromise, though not one everyone was sat­isfied with. The nation still struggles today with issues of identity. Grayson explained, “The col­onization of Ireland happened at the same time that the British were colonizing America. It’s no easier to get the British out of Ireland than it is to get the ‘Americans’ off Manhattan. That’s not happening.”

Grayson also drew parallels to modern con­flicts, asserting that Irish Unionists today identi­fy with Israel, to the surprise of Israel itself, and Republicans side with Palestine. The idea that Unionists see themselves as a colonizing body shows that the same issues which plagued the world a century ago are still present today. Lesher agreed, “We still don’t listen to our colonial and imperial voices. Most of the countries who en­gage in imperialist colonialist acts, including the United States, still hold some of those colonial ar­eas. Those are still voices that we’re not listening to and not acknowledging.”

While the effects of the War were felt more keenly in certain areas of the world than others, its impact in terms of military ideology were global. “It matters because it was the first mili­tarized war,” stated Lesher. “Once we militarized for the First World War and made all these muni­tions and destructive things, we never demilita­rized … We’ve been living in a state of war since that war happened.”

Ireland at least is working towards internal peace through memorialization efforts, in forms ranging from traditional stone monuments to modern murals. Instead of fixating on the his­torical divide, the Irish are collaborating to re­member fallen ancestors and countrymen. Mary Lesher ’16 commented, “After the troubles in the [19]70s and 80s, when there was so much ten­sion…in Northern Ireland, they tried to find a common denominator for people on both sides of the aisle to come together on, [and that] was the First World War, because both Unionists and Nationalists had worked together in this war, sometimes fighting side by side.” Kennett spec­ulated, “The explosion of memorialism [about] WWI is quite surprising but is also very tangible. The centenary of the start of the War saw a huge outpouring in the UK–bigger than might have been expected on say the half-centenary.”

The centenary of 1916 is particularly crucial for the Irish. The Easter Rising and the Battle of Somme confirmed the rift between Unionists and Republicans that year. Professor of Econom­ics David Kennett wrote in an emailed statement, “[T]he Easter Rising was a major turning point in the Irish independence movement. Where home rule was the objective of all but a few, the heavy, punitive hand of the British gave a huge impetus to Sinn Fein [Republican movement]. Viewed from the other side, the Rising was seen as a ‘stab in the back’ when Britain was involved in a ‘just war’ elsewhere.”

Grayson believes it is important to tell both sides of this story precisely because these nar­ratives are not generally well known. “I think it’s been the case that ever since the First World War period, the different communities have told very partial and separate stories, as if they were inhabiting different worlds,” he explained. “The history is a symbol but also a contributor to the ways in which people live their lives, in quite a divided manner.”

Understanding history, according to Grayson, is essential to understanding contemporary events. “Of course, history can help us to under­stand a lot of today’s problems. History helps us avoid making the mistakes of the past–we just make different ones instead. It doesn’t stop us making mistakes.”

100 years on, the echoes of WWI are visible in the military and political legacy it left behind, but the individuals involved are no longer remem­bered. In discussing this issue, Lesher quoted historian James Axtell. In his book “After Colum­bus,” he writes, “Like politicians, historians have constituents who need their services and fair representation … But for the historian, constitu­ents’ rights do not end at the grave; they really begin there because the dead are no longer able to speak for themselves or to ensure that what is said and written about them squares with their vision of the truth.” Lesher summarized, “That’s why I do history: to give people who don’t have a voice, a voice.”