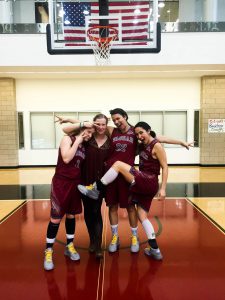 The women’s basketball seniors have all boasted illustrious careers. All hold personal records and accomplishments. Despite an underwhelming season, they can all hold their heads high. Photo courtesy of Vassar Athletics

The Vassar College women’s basketball team recently wrapped up a tumultuous and frustrating 10- 15 season which saw them come up short of their aspirations for a trip to the Liberty League post-season tournament. The difference between making and missing out on the tournament was razor thin. Six of the games the Brewers dropped against Liberty League Conference competition were decided by three points or fewer. While missing out on the opportunity to continue competing, the Brewers did steadily improve their results over the course of the season.

The team experienced much of their struggles early on; however, as players returned from winter break, the Brewer women began rounding into form. The team faced a litany of difficult opponents, including predominantly Liberty League competition.

Despite these challenges, the Brewer women upped their level and experienced a great deal of success after the start of the spring semester. The team went 6-3 in their last nine games, a run which also included a season-ending pair of Conference victories against Bard College, a comprehensive 82-42 trouncing, and Rensselaer Polytechnic Institute, 88-74.

The women’s basketball squad can take these improved results and momentum wth them into the offseason. Head Coach Candice Brown will have to do without several key performers next year though, as four Brewer Basketball players competed in their final game for Vassar College this winter against RPI. Senior guards Alex Moon and Caitlin Drakeley, as well as forwards Rose Serafini and Colleen O’Connell will be graduating in just a couple months.

Forward Alex Moon bookended her interrupted collegiate basketball career at Vassar College on a distinctively positive note. In her last season on the court for the Brewers, she played an integral part on the team. The senior out of Mission Hills, Calif. started in 18 out of 24 games played during her final season. She led the team in assists during the ’15-’16 season, dishing out an average of four per game, while racking up 95 overall. She was also featured in the top five in two other statistical categories. Moon finished her senior season with 26 steals, tying for third on the team. She was also the fourth-best rebounder on the team, nabbing an average of 4.2 per game, with 101 over the full course of the season. After returning to the team for the second half of her junior year, Moon was recognized for her ac- complishments in the classroom with a 2014-2015 Liberty League All-Academic Team selection.

Milton, Ontario’s Rose Serafini used her height and strength throughout her career to establish herself as a defensive presence for the Brewer women. She closed out her time with Vassar as the team’s all-time leader in blocked shots, finishing the season with 80 rejections—breaking the previous single-season record she set herself last year, with 64 and her career with 192 overall. Most notably, she ranked 24 in the nation in DIII and second in the Liberty League for blocks during her junior year. She also led the Liberty League in overall blocked shots in Conference play during her senior season. Serafini started every one of the Brewer Women’s 25 games this year, snagging 183 rebounds over the course of the season. She averaged 6.7 points per game. The Brewers will surely miss her presence, both on offense and defense in the post, and role as defensive stalwart and general athletic playmaker.

Senior forward Colleen O’Connell, hailing from Maywood, N.J., proved to be one of Vassar’s more outstanding performers from the outset of her collegiate career. As a first-year player, she played in all 28 games, starting more than half. O’Connell came close to averaging a double-double over the course of her first season. By the time her first year had ended, O’Connell had been selected as Liberty League Rookie of the Week on four separate occasions, had made the Liberty League All-Rookie Team, and had been tabbed as the D3Hoops.com All-East Region Rookie of the Year and Liberty League Co-Rookie of the Year. She also garnered recognition for academics, earning Liberty League Honor Roll mentions four times throughout her career. O’Connell closed out her time with the Brewer Women’s Basketball team playing in 15 games, starting 9. She averaged 6.5 points per game, recording a season-high 19 points against Union College, as well as shooting an efficient 80 percent from the free throw line.

Despite not getting the results they would have liked, the Brewers found some positive aspects to take away from the 2015-2016 season. The players, by working through and moving past the challenges posed by the first half of the season, also found themselves more connected to each other as teammates. One of the takeaways for the seniors was their time spent with teammates on and off the court.

“This past season…had its ups and downs but overall it was one of my favorite seasons I’ve played in throughout my entire career. We were forced to struggle through some adversity but that brought us all much closer together in the end,” said Drakeley.

Moon expressed a very similar sentiment: “I’m going to miss it all…but mostly my teammates, past and present. We were all so genuinely close to one another. I’m the most comfortable when I’m with all of them. They see me at my worst, they see me at best.”

The culmination of their last season as Vassar student-athletes also provided the Women’s basketball seniors an opportunity to reflect on their athletic careers, what they’ve gained from playing on the team, as well as how Basketball has affected their college experiences: “I’ve learned more from basketball than I have in the classroom. I’ve learned how to graciously handle…refs, celebrate the little things and how to be an effective engaging leader,” expressed Moon.

“Playing on the women’s basketball team here at Vassar has definitely been one of the best experiences of my life. The relationships that I have developed over the years and memories that I have formed are ones that I will hold onto for forever,” summarized Drakeley.

This season was the last for these four seniors, but the first for several freshmen, who could have had no better role models than Drakeley, Moon, Serafini and O’Connell.

“[O’Connell and Serafini are] great leader[s], [Moon is] a great role model on and off the court, [and Drakeley is a] really tenacious…hard worker,” freshman Julia Roellke said when asked to describe her senior leadership.

During the past four years, these seniors have played a part in two particularly outstanding seasons, as the Brewers won the Liberty League title and their first game in program history at the D3 National Tournament at the end of the 2013-2014 season, while also attaining a new school record for wins with 23.

The rising members of the Brewer women’s basketball team will have to compete next season without several of their established key starters and playmakers. Momentum is on their side, as the team finished this past season in encouraging fashion. While Serafini, Moon, Drakeley and O’Connell will no longer compete on the court for Vassar, they have laid the groundwork and given the necessary tools and mentorship to their teammates for them to achieve future success.