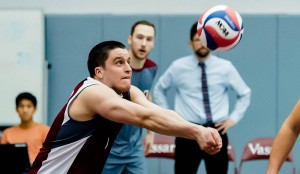 Junior captain Trey Cimorelli and the successful men’s volleyball team have been battling a tough stretch of play that has seen them lose narrowly to some of the best competition in DIII volleyball. Photo courtesy of Vassar Athletics

The high-ranked Brewer squad had no time for rest this week, facing No. 12 New York Uni­versity on Tuesday and No. 1 Springfield College and Lasell College on Saturday. The men trav­eled to NYC for the UVC game and fell in a 1-3 contest 25-20, 22-25, 13-25, 22-25. Despite capturing the first set thanks to six kills by senior standout Reno Kriz, Vassar couldn’t hold the Violet offense back. Sophomore middle hitter Matthew Knigge helped the Brewers gain a lead in the second, but to no avail as NYU battled harder to capture the set. The men struggled in the third, posting nine errors and dropping to a 33 percent side out rate. Although Vassar managed to regain strength in the fourth, NYU outlasted them for the win. Over the weekend, the Brewers trekked to Springfield, Mass. for the Saturday double-header. The No. 1 Pride pushed pass the Brewers 25-18, 25-19, 25-15 in the first game. A kill by sophomore Zecha­riah Lee in the first put the men at arms length from Springfield 18-15, but the top team regained momentum to take the set. The Pride continued to show dominance, hitting .73 in the second set without any errors. Seven errors from the Vassar offense helped Springfield capture the fourth set and the win. Despite the loss, Knigge hit a match-best 15 kills while Lee finished with 24 assists and five digs. In the second contest, the squad edged past Lasell in three sets with scores of 25-21, 25- 22, 25-7. The Brewer offense took control in the match, hitting .488 overall, specifically .533 and .647 in the second and third sets respectively. The men accelerated their play in the fourth set, hold­ing the Lasers to just two kills. In the match, Lee posted 36 assists and nine digs, both team-bests, while freshman George Diehl and junior Quinn Rutledge both earned seven kills. The week of play places the men 12-4 overall and 2-2 in con­ference play.

The Vassar women’s tennis team faced chal­lenging competition on the road in two Liberty League contests. On Saturday the Brewers defeat­ed Rochester Institute of Technology 9-0. They started out the match strong, sweeping all three doubles spots, but it was sophomore Courtney Geiss who clinched the match in a decisive 6-0, 6-0 victory. Unfortunately, Vassar couldn’t main­tain its dominance in their match against St. Law­rence on Sunday. The Brewers went into singles play after losing two out of three doubles match­es. Sophomore duo Morgan Fitzgerald and Kate Christensen were the only pair to secure a win at the number three spot, 8-5. Christensen and se­nior captain Kelsey Van Noy rebounded in singles to give the Brewers a 3-2 lead, followed shortly by junior Shayna Becker who won the final match for the Brewers. Freshman Morgane Flournoy fell 6-4, 6-1 at the number five spot while Fitzgerald and Geiss fell at the fourth and second singles positions in long three-set matches. The Brewers are now 3-1 in Liberty League standings and 4-2 overall.

The Vassar men’s basketball team traveled to Saratoga Springs, N.Y. on Feb. 24 to face Skidmore College in the semifinal Liberty League Cham­pionship game. With an unfortunate 82-71 loss, the season for the Brewers is now at a close. The Brewer underdogs came out on top 36-31 after the first half, shooting 52 percent to the defend­ing champion’s 39. However, the Thoroughbreds completely changed the game in the second half, raising their shooting percentage to 58 while hold­ing the Brewers to 36. Despite the loss, Vassar played a high quality game, with four men scoring in double figures. Sophomore Jesse Browne con­tinued to prove his skills with 18 points and three blocks while senior captain Erikson Wasyl con­tributed 14 points and four rebounds. Freshman center Paul Grinde scored 13 points while junior Mickey Adams totaled 10. The Brewers ended their season with a 12-14 overall standing and an 8-8 conference record.

On Sunday, the Vassar women’s epee team traveled to Princeton, New Jersey for the 2016 United States Collegiate Squad Championships. The squad finished seventh among the 11 com­peting teams in the event. The No. 8 seed Vas­sar team, made up of seniors Amreen Bhasin and Margaret Shepherd, junior Olivia Weiss and freshman Rose Hulsey-Vincent, first defeated No. 9 seed Fairleigh Dickinson University 45-42. The Brewers then dropped a close 45-42 match to No. 5 seed Brandeis University. After the first round of play, the match was tied 5-5, but Elizabeth Feller of Brandeis achieved a 9-2 spread in round three to push ahead 15-9. Although Hulsey-Vincent de­creased the deficit to 15-11, it wasn’t enough to de­feat the Owls.

The Vassar men’s epee and sabre team com­peted in the 2016 United States Collegiate Squad Championships Sunday at Princeton University. The Brewers finished seventh overall at the end of competition. The epee squad earned a bye as the No. 4 seed and resultantly faced Yale University in the round of eight. Despite 13 and 10 touches by sophomore George Whiteside and junior Ry Far­ley respectively, the Brewers fell to the Bulldogs 42-29. The following contest against Brandeis University was a nail-biter as the Vassar squad lost 45-44. At the start of the match, the Brewers held the lead, but Brandeis’s Hunter Stusnick retaliated to take the advantage. Although sophomore Jona­than Alperstein pulled back to tie things up at 44, Thomas Hearn of BU earned the winning touch. The Brewer sabre group, seeded No. 7, cruised past Incarnate World in the first round 45-14. Sophomore Eli Polston and seniors Zachary Wil­son and Elam Coalson each contributed 15 touch­es in the victory. The following match against No. 2 Princeton proved more difficult as Vassar dropped 45-39. Following the loss, the men faced No. 6 Columbia University in the table of four and again battled hard but ultimately fell 45-39. In the seventh place match against Brandeis, Vassar was victorious 45-42 in another close match. Coalson earned seven touches to take the lead, which the Brewers maintained throughout the contest.