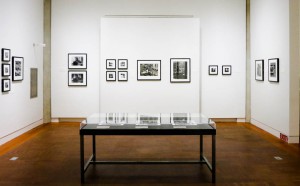 For the second year, the Loeb is participating in Slow Art Day. This national celebration encourages museum patrons to contemplate art in a comfortable, safe space. This reflection can be meaningful for art aficionados and beginners alike. Photo courtesy of FLLAC

Last weekend, I made the mistake of going to the Metropolitan Mu­seum of Art on Good Friday. The mu­seum was packed with tourists so we rushed through and attempted to see as much artwork as we could before becoming too annoyed with the mass of people surrounding us. When we had finally finished and left the mu­seum, I realized that none of the art had left a significant impact on me. Those few seconds we would take to look at a work and maybe take a picture did not leave a lasting im­pression, which left me disappointed and full of regret. I was near art for hours, but did I really see it?

Thankfully, the art world has come up with a new method of looking at works of art. Rather than spending the average of eight seconds on a work, an event called Slow Art Day encourages people to spend several minutes on a specific piece in order to gain more re­flection and clarity. The Coordinator of Public Education and Information at the Loeb, Margaret Vetare, has coor­dinated the Loeb’s participation in the event for the second year in a row.

It all started in 2008 when the founder of Slow Art Day, Phil Terry, experiment­ed with slowly looking at art by spending hours looking at only Hans Hoffman’s “Fantasia” and Pollock’s “Convergence” at The Jewish Museum. The next year, Terry brought other participants to do the same thing at the Museum of Modern Art. As time went by, more and more galleries and museums got involved and it went from one man and one museum to over 200 venues in 2015. This year, there are 159 Slow Art Day venues around the world and counting. These include a large diversity of places, whether they be museums, galleries or institutes. These include the Phila­delphia Museum of Art, the National Gallery in London, the National Portrait Gallery of Austra­lia and Gallerie dell’ Accademia in Venice, Italy. Each place is encouraged to interpret the logistics widely and creatively so every participant is giv­en a unique experience. The event will take place on Saturday, April 9 at 11:30 a.m.

Now, how does one look at art slowly? The goal is to focus on the art and the art of seeing by taking the time to look at four different works of art representing distinct periods and styles for 10 minutes each. Loeb Multimedia Assistant Delphine Douglas ’18 enjoys this setup. She said, “There’s no discussion until after, so there isn’t any pressure to know or understand anything. It’s really about taking time to interact with art in a no-pressure environment.”

Studies have actually taken place based on this idea, which have found that people that have more time to look at something have a more in­grained idea of what they saw. Like the fast-paced world around us, so many factors encourage us to move at a fast speed through life, but taking the time to actually look at and appreciate art provides new layers of revelation and ways of seeing. After observing the four works, everyone will come together and have a conversation about their own discoveries.

Certain types of art inspire you to spend more time on them. Even the most straightforward painting reveals perspective the longer one looks at it. Vetare explained, “Our own reactions take time to cook, like adjusting to the night sky. It takes time before one is actually able to see, but then instead of darkness layers and pictures ap­pear in front of a person, which is parallel to the experience at Slow Art Day.” Looking at art slow­ly creates more layers, which paints one’s visual environment. The Loeb workers tried this out before hosting the event and reactions were over­whelmingly positive. Douglas said, “I appreciated the chance to be personal with the art and come to my own conclusions because I was given the time and space to do so.”

When people go to a museum for a program or a tour, there is an expectation that the expert tells the visitor about the art and its significance. Slow Art Day goes against this idea. You don’t need an expert to look at art, because there is no correct judgment on a given work. Every visitor brings something different. You are led not by someone but your own visual experience. In addition to its visual benefits, the event is an all-volunteer effort, reflecting the amount of interest in the type of oc­casion.

Slow Art Day also is also exciting for student workers at the Loeb. Docent at the Loeb Josh Schwartz ’18, likes that the event supports the idea of looking at art more meaningfully and pur­posefully. Schwartz says, “The conventions of the museum have made it increasingly easy for visi­tors to pass through hundreds of paintings, only glancing briefly at each, trying to acquire breadth and not depth. Slow Art Day seeks to undo that and provide people with an intimate experience with art, to look at it more deeply and to come closer to understanding it.”

Vetare has high hopes for the event and its last­ing impression on participants. She mused, “We hope people bring their experience in this one day of programming into their future encounters with art. Do this one thing for ten minutes, and I think people will be happily surprised at the depth of their experience.” On the event’s web­site, a quote by Henry David Thoreau sums up the ideas behind the program: “It’s not what you look at that matters, it’s what you see.”