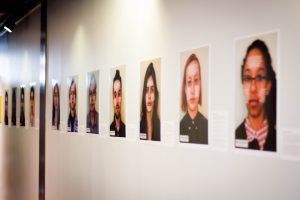 For the third year in a row, the Privilege Cam­paign has delivered an installation of student and administrators portraits which bring to light the intrinsic and environmental advantages of their subjects. The faces, viewed straight on, unabashed­ly wear the words of privilege otherwise read into their identity. “I am an able bodied upper-middle class, cisgender, heterosexual male. With these combined identities my privilege is exponentially greater than any one of them alone,” Anish Kano­ria’s ’18 right cheekbone reads. On panels next to each portrait, the subjects share their thoughts on dominant privileges and reflections associated with not having access to privilege. Yesterday, the gallery had its opening reception on the second floor of the college center.

Antony Manokhin ’18: “I was raised and live in an affluent town. My privileges in that setting are intensely apparent. I’m white, able bodied, and a man in a com­munity run by people who are like me. People unlike me are treated differently and unfairly. However, I am a child of an immigrant, live in a single parent house­hold, and my family and I are of lower so­cioeconomic status compared to my peers and neighbors. These facts do not give me privilege.”

Kim Culligan: “I am perceived to be ed­ucated, speak English, employed and non­threatening because I am white. I will be more likely to get a job, advance to higher levels of responsibility and perceived as more competent since I am white. I have never been unemployed and am happy to be working at Vassar College in my termi­nal job. I plan to retire within the next few years after spending 29 years in collegiate athletics.”

Frank Najarro ’18: “I have privilege.

Ashley Hoyle ’18: “As a white person, I have been afforded unearned benefits to my education, social status, and profession­al development. I am never asked to be a spokesperson for my race and have never been considered an exception when I per­form at a high level. I have never been made to feel unwelcome because of irrational, systemically ingrained fear within the dom­inant culture. As a queer-identifying indi­vidual I cannot make choices without them being conflated by my sexual orientation.”