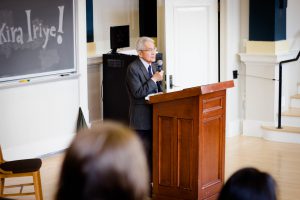 Dr. Akira Iriye spoke at Vassar on April 2 about East Asia and the importance of historical global events to globalized society. His lecture was sponsored by the Asian Students’ Alliance. Photo by Ashley Pecorelli

Balance of trade, human rights issues, power plays and industrial expansion dominate the current discussion of East Asia. Dr. Akira Iriye, invited by the Asian Students’ Alliance to speak on April 2, takes a different approach, focusing on the implications of World War II and the Cold War in East Asia for the globalized world.

Former Treasurer of ASA Kentaro Kaneki ’17 elaborated on this theme, saying, “I’ve been thinking about inviting Dr. Iriye for about two years now. I think he is really different from oth­er speakers invited by ASA, in that he offers a more global and historical perspective by which to think about ourselves.” ASA President Wen­dy Liu ’17 agreed, “I think Dr. Iriye is unique be­cause his work allows students to connect the dots and think about themselves in a larger, richer narrative.” Iriye’s humanist perspective calls on people of all backgrounds to reflect their histories as shared memory.

Showcased in the documentary “Vassar: Through a Chinese Eye,” Iriye’s lecture is al­ready an example of transcultural exchange. Producer Rose Zhang ’19 explained, “Our pro­spective audiences are those students and par­ents from China who want to know about liberal arts education. We want to present our true ex­perience here at Vassar.” While Rose presents excerpts of Iriye’s lecture to prospective stu­dents in China, Iriye pointed out Vassar’s in­ternational students and exchange programs as a paradigm example of social movements that have transformed the world into a closer, glo­balized society.

As he continues his academic career into his ’80s, Iriye’s belief that the past carries insights for future projects in research, policymaking and creative expression has only been strength­ened. He began, “When we talk about anything like China, Japan, the United States or the world today, setting up the time frame is very import­ant.”

Iriye’s personal experiences, having lived through the First and Second Sino-Japanese Wars, have made him adamant about the im­portance of inclusivity and truth in recounting history. “We need to talk about the past because history tends to be distorted, particularly histo­ry education. It’s not just Japan, China and many other countries that have official textbooks,” he remarked. “Even in the United States, the gov­ernment in Washington may not control these writings, but many states do.”

President of the Southeast Asian Students’ Alliance (SEASA) Kryzel Bonifacio ’17 recog­nized the kind of education Iriye described. She reported, “I was born in the Philippines, in Southeast Asia, and that topic was never really a part of the history classes I learned in while I was living there, or even in classes in the United States.” Liu also appreciated Iriye’s acknowl­edgment of the need for more inclusive history education. She remembered, “In high school, our history classes gave us the standard nar­rative that Asia is only East Asians or that the Chinese built the railroad, the Japanese bombed Pearl Harbor and the Koreans were invaded. But listening to Dr. Iriye’s lecture and coming to college to learn about our histories, the ones that have been erased, from various other per­spectives shows us that we are much more than that.”

Iriye emphasized that an honest attempt at teaching history is greater than any ideological framework or moral lesson that could be built from the groundwork of history. Drawing a comparison to European history, Iriye argued, “Europeans say that the European Union is a group of shared memory. That’s a normal idea. Unless Chinese, Japanese and Koreans share some sense of the past, there is not commu­nity there. And I agree with that; community does mean some kind of shared past, of shared memory.” Iriye suggested that the basis for our globalized society is a profound respect for the humanity shared by each individual.

Fostering this respect in the face of conflict requires extensive communication in official diplomatic channels, continued growth in the operations of international NGOs and everyday contact between individuals, what Iriye termed transcultural exchange. Professor of Political Science Fubing Su responded, “Transnational connections, particularly people-to-people ex­changes, can be a positive force and we should definitely encourage this trend.”

Students were impressed by Iriye’s enthusi­asm despite the daunting challenge of changing international conceptions of history from the ground up. Kentaro admitted, “Although I don’t see as many reasons as Dr. Iriye does for being optimistic about the near future, in fact I would say that I’m kind of pessimistic, I do believe that being optimistic has its important points. When you are optimistic, it’s harder for someone with extreme and irrational ideas to capture you at an emotional level and carry you away.” Kry­zel agreed, “His optimism was unexpected, in terms of discourse about international relations in the modern day, where everything seems re­ally horrible and really bad.”

At the very least, Iriye remained defiant of the prevailing pessimism among his contem­poraries and audience. He explained, “People have been telling me that I’m unrealistic. But I believe you have to have a vision for humani­ty.” The audience was filled with the youthful faces of students and professors who were born during or after the détente of the 1970s. Ad­dressing them, he concluded, “It seems to me that you were born into a much more promising world and your responsibility as human beings is to make sure the world does not go back to the way it was.”