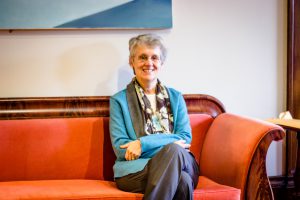 On March 29 President Catherine Bond Hill announced the approaching end of her presidency in 2017. President Hill is the 10th president of Vassar College. Photo by Ashley Pecorelli

On March 29, President Catharine Bond Hill announced her de­parture from Vassar at the end of the 2016-2017 school year in an all-campus email. “The Board of Trustees will make a more formal public announce­ment later today, but I wanted to take this opportunity to let our community know in a more personal way of this long-planned transition,” Hill wrote. By the time she steps down, the for­mer economist will have been in of­fice for 11 years. Her presidency will be marked by an emphatic prioritiza­tion of financial aid, a transformation of the student body and numerous renovations and expansions including the construction of its new integrated science building, the Bridge for the Laboratory Sciences. Hill’s announce­ment of her departure, however, has been met with some concern, par­ticularly the worry that her biggest contribution to the College’s financial aid policy, need-blind admissions, will leave with her.

“We have accomplished so much with contributions from so many at the college, it feels like the right time to hand over the work to a new presi­dent and to continue my work in some new and exciting ways,” Hill wrote. She will be on sabbatical through the fall of 2017, continuing her economics research on access and affordability. “My most recent work is on the im­pact of income inequality in America on higher education, which I think is a really important issue that has gotten less atten­tion than it deserves,” she explained.

Hill’s successful implementation of need-blind admissions at Vassar has had a profound impact on student finances. Prior to her arrival, Vassar College was as a need-aware institution that granted $6,541,453 in financial aid to the class of 2009. After Hill’s arrival, scholarship money increased rapidly each year, reaching $17,437,883 for the most recent class of 2019 (Vassar College Factbook 2015-2016, 33).“At the time, the college was not particularly diverse relative to its peers,” Hill wrote. “As a community, we talked about our financial aid policies and made changes to attract a more diverse applicant pool.” Hill also recounted that during the Great Recession, Vas­sar continued to increase spending on financial aid using money from the endowment. “We have been managing our total spending to get back to financial sustainability, but the last few years of poor financial returns on the endowment are proving challenging.”

As Director of Student Financial Services, Jessica Bernier has worked closely with finan­cial aid, under Hill’s influence. In the time that President Hill has been part of the Administra­tion, she confirmed, financial aid has undergone a dramatic transformation. Bernier explained, “When she came on board and [headed] the push for need blind and also having no loans for our lowest-income students, that really changed financial aid and what our campus looked like.”

Bernier emphasized the importance that Hill’s focus on financial aid has had on the makeup of the student body as a whole. As she described, “This campus looks completely different as far as our student body goes. I think that’s the leg­acy that [President Hill] would want people to remember. Our diversity has increased across every different sector. [I’m] thinking about race, ethnicity, socioeconomic status, gender, geogra­phy, nationality, that is the product of financial aid going need-blind … [I]t became more acces­sible to more students…and I think it’s for the better.“

As important as need-blind admissions has been as a symbolic measure to reinforce Vassar’s commitment to economic accessibility, Bernier and the Committee on Admissions and Financial Aid (CAFA) student representative Joshua Sher­man ’16 both stressed the nuance behind the term “need-blind.” Bernier was quick to explain that while the terms “need-blind” and “need-aware” or “need-sensitive” had powerful meanings, they aren’t always so different in practice. Going back to need-aware admissions is not necessarily the wholesale move away from economic accessibil­ity that some are worried about.

In effect, both terms fall on a spectrum. “Need-blind” may be at one end, but “need-aware” isn’t always at the other end. As Bernier explained, “Thinking about need-aware, need-sensitive, it can run the gamut. I’ve been at schools where it was a factor, they wanted to know exactly how much the student was going to need of institu­tional aid at the time of decision and then I’ve been at the other extreme where they’re essen­tially need-blind until they get to the end and realize based on projections they could be over budget when the class comes in so they tweak it at that point. It’s really based on each institution.”

A critique of the need-blind appraoch is that colleges are often more concerned with the fi­nancial consequences of committing to need-blind admissions, rather than the implications for potential and current students. According to Sherman, Hill’s initiative to foster need-blind admissions at Vassar has a complex history that hasn’t always been inspired by the same kind of personal and social concerns that many students bring to conversations about admissions today. As he reflected, “Some in higher education look at need-blind admissions as a tool that moves cer­tain metrics, often in diversity and low-income accessibility. Vassar’s decision to go need-blind can no longer be seen as something that simply moves metrics. It should be viewed as something the college is financially fortunate enough to start doing, as something that does good for the world, that does good for the college and does good for the student body as a whole. To reverse this trend in any way, even if you could prevent a change in these metrics, irreparably destroys something we started building 10 years ago.” The important thing to remember, Sherman ex­plained, was that considering need-blind admis­sions and its reality at Vassar cannot be simpli­fied or considered solely in terms of the numbers behind the College’s finances. “To me, you can’t see these policies through metrics alone. When people around the world talk about Vassar and center that discussion around its admission and financial aid policies, you can’t quantify that through a set of certain numbers that inherently dismiss the larger meaning,” he said.

Although students receive similar financial aid packages under both need-blind and need-aware admissions, Bernier reiterated that many prefer the title of need-blind admissions also for its equitable associations. As she explained, “You also have to think of it from the student perspec­tive. Knowing that they need every dollar, are they going to get it? Filling out the essays and paying the application fees, that can add up and if you think, ‘Well I need so much money, they’re probably not going to let me in, so why bother?’”

But Bernier also spoke to the need for constant revision of financial aid and every other College policy. To her, the placement of a new president on campus is an opportunity for a fresh perspec­tive. And that perspective might have a new ap­proach to the College’s financial aid approach. “With a new president, almost anything is fair game. They have every right to come in and question everything we’ve done and why we’ve done it. I’m sure need-blind admissions will be on the table much like new buildings will be on the table. I think it’s right for anyone to question everything that we’re doing. It’s always good to have a fresh set of eyes,” she said.

But there are further complexities to the con­versation about Hill’s departure from Vassar and its effect on financial aid. One such point connects directly to the criticisms that Hill has weathered during her time in office. Despite recent advances in diversity, some find being a student more challenging than affording tu­ition. Students from low-income backgrounds in particular report a lack of support from the college once they have arrived on campus. Health-care and housing are two notable exam­ples of a seeming disconnect between Hill’s vi­sion for an economically accessible institution and the reality that many low-income students experience. A letter from the VSA Committee on Student Life to the Administration outlines issues with healthcare that students have faced: “The VSA Committee on Student Life has re­ceived numerous concerns from students about the accessibility of off-campus mental, medical, and pharmaceutical services…The college lacks a 24-hour medical center. There are no doctors available during evening hours or weekends, and there are few specialists and other such medical professionals. Because of this, students depend on specialists, general practitioners, therapists, and other professionals that are not located on campus.

Furthermore, all emergency medical services are provided through hospitals not located near campus. Vassar students subsequently expe­rience numerous challenges in order to reach such facilities, whether for regularly scheduled appointments, or to return to campus following emergency transport and care.” The letter, in part, argues that a lack of institutional support for students, particularly students who could not afford their own transportation to and from private medical services, made life at Vassar eco­nomically inaccessible. As Sherman reflected, this time as SoCo President and a co-signer of the letter, “What is this commitment if it doesn’t also meet these and other needs? We’ve learned a lot during this first decade of need-blind admis­sions, and now it’s time to learn from this and do it better in the next decade with the reaffirmed commitment of students, administrators, faculty, and alumnae/i.”

Whatever happens with need-blind admis­sions after President Hill takes her leave, one thing seems to be clear: Vassar’s focus on fi­nancial aid services isn’t going anywhere. “Vas­sar has always been committed to meeting 100 percent of the students’ need. I think our overall world has changed since President Hill has come in. More schools are offering more need-based aid, some are trying to move away from merit aid. I don’t think we are ever going to completely shift away from what we do. It will always be a priority. I don’t see a shift away from making fi­nancial aid a priority,” Bernier said.