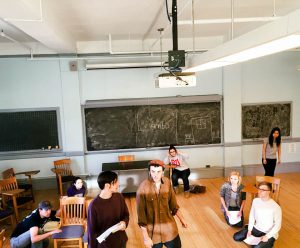 Directed by Dakota Snellgrove, Limbo explores the concept of Purgatory on stage. This experimental production follows characters on a journey of exploration and discovery, set in a mysterious place. Photo courtesy of Dakota Snellgrove

What can occur in just 40 minutes? Ac­cording to Dakota Lee Snellgrove, direc­tor of “Limbo,” a lot can happen. In this 40-min­ute, one-act play, “Limbo” promises to make the audience question dubious ideas such as Purgatory and good and evil. The diverse cast features experienced actors and newcomers alike. The production will take place in Sanders Classroom Auditorium, Friday, April 15 at 7 p.m.

“Limbo” follows a set of characters that have spontaneously appeared in a room. They were somewhere before, but now they’re here and have no idea why or where that is. Are they dead? Is time frozen? It’s loosely like Satre’s “No Exit” and Pirandello’s “Six Characters in Search of an Author,” which are two staple texts in experimental theater. There is a fight for power as the characters hide their identi­ties and alter them–all while trying to answer some existential questions and make sense of their situation.

The room in “Limbo” is essentially Purgato­ry, filled with both the good and the bad, and everyone is trying to figure out where they are and where to go. Cast member Matt Stein ’18 [Full Disclosure: Matt Stein is the Assistant Arts Editor at The Miscellany News], com­mented, “It’s a very ambiguous play to say the least. Fourth walls are broken and tensions rise.”

Each character is different and provides a unique perspective to the mystery that is why all of these people are gathered in a room. Some of the members of the crew will be playing groundskeepers, who maintain the area. These characters add an element of comedy to the show–chitchatting in the background, ignoring their “work.”

There is a sense of enthusiasm and excite­ment in the cast. Everyone is happy to be col­lectively a part of this experimental project, whether it be someone’s first production or their 12th.

Max Jahns ’19 got involved with the produc­tion through the insistence of a friend. Jahns said, “I’m not really a drama person, but my friend, Nic Penn ’19, is the assistant director to the play. One day I was coming from Class Council and heard there were auditions, so I on the spot decided to do it. At the time I had mono, which interferes with your ability to reg­ulate emotions, so I just cried. And I got the part!”

Jahns plays Hal, a middle manager-type with no sense of self. He said, “Hal’s a marshmallow, in a bad way, because Hal has no real strength and depends on others such as his wife, Susan, to keep him moving forward.” While Jahns is not usually part of theatrical productions, he is very excited about Limbo and its director. He said, “Dakota, our director, is doing a lot with a little. While it is a not well-known play and is very minimalistic, both the actors and the au­dience get a lot out of it. It’s different and peo­ple are going to be questioning what its about. We might even trick the audience into thinking there’s some real substance.”

While some might just be dipping their toes into acting, some members are much more ex­perienced. Matt Stein, an anchor in the drama department, plays Trenton. While he was orig­inally started in the production as the drama­turg, there has been a lack of students audition­ing for roles this semester, which led Stein to switch roles. Stein said, “I had to read Nietzsche to get into character which I hate with a passion but the role itself is fun. Trenton is a very ma­nipulative and philosophical character. He likes to twist what others say and play the God card too. Half the time in rehearsal I find myself at­tempting to annoy everyone since he’s that way. He’s also very flamboyant and sarcastic, a bit like an old Batman or James Bond villain.”

Stein also recounted the laid-back rehears­als for the production, which contrast the stress-inducing, tiring rehearsals one usually hears about in the theatre world. He explained, “We usually reflect about our days first and then jump into the show. It’s been very loose so whoever can make it for the day gets the focus of the rehearsal.”

Stein described his admiration for the cast. “Every character gets a moment to shine, whether it’s in a monologue or an intense di­alogue and I’m proud of everyone involved in the cast.”

Now, how did the idea of a Purgatory come together? The production’s director, Dakota Lee ’19 knew that they wanted to get involved with theater at Vassar. Philaletheis, the largest student group on campus, produces a motley of programs throughout the year for students to get involved in. Lee recounts, “I saw that Philaletheis (largest student theatre group on campus, puts on directing workshops) was having proposals for plays, and my friend and assistant director Nic Penn urged me to submit one, and ‘Limbo’ was born. ‘Limbo’ is this play I read in high school that I always wanted to perform but my theatre director never wanted to do it.”

Dakota is very enthusiastic over their final creation. Lee said, “I think people should see it because it features a group of actors that are very good at what they do. Naturally, I’m biased as I’m the director, but everyone involved is passionate and super solid in their roles. Some people in this play do not have a lot of acting experience, so it’s cool to see them get into their roles and really get into the meat of their characters.”

Lee closed with the gratitude they have for all of the people involved in the production. “It’s been a pleasure to direct them, which is great because it’s my first time directing. It’s such an exciting experience and I am glad I de­cided to do it.”

“Limbo” promises to make the audience question broad ideas such as Purgatory and good and evil through different perspectives from seemingly ordinary people. This quick ex­perimental theater piece will give anyone time to see the show as well as the Idlewild or Bare­foot Monkeys shows that follow. With a broad, enthusiastic cast and a talented director, “Lim­bo” will not disappoint.