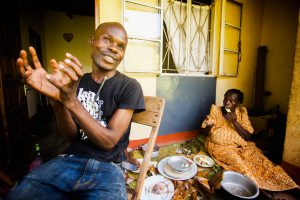 Wambere, a Ugandan LGBTQ civil rights activist, offered a lecture Wednesday, April 13 in Rocky regarding his work in Uganda with trying to protect the LBGTQ community and its allies. Photo courtesy of Katherine Fairfax Wright

“Courage, then, my country­men, our contest is not only whether we ourselves shall be free, but whether there shall be left to mankind an asylum on earth for civil and religious liberty.” When Samuel Adams first uttered these words before the State House of Pennsylvania in 1776, the funda­mental principles of independence and equality in treatment were no doubt preeminent in his mind.

Skip ahead more than two-and-a-quarter centuries later, and this appeal to the rudimentary right of individuals to access a freedom of expression and civil liberty is still being echoed. John Wambere famil­iarly leads the charge to secure civil liberty and rights for an oppressed people.

Currently based in Boston, John Wambere is no stranger to contro­versy as one of the key leaders of the gay rights movement in Uganda. Wambere fled from Uganda when the course of his work left him witness to the death of other loud and proud gay rights activists. Now a po­litical asylum seeker, Wambere first appeared in the United States only a few years ago.

Alone as he was, Wambere was still alive which for him, was enough. Moving to the United States was a means by which Wambere could focus attention on his home commu­nity in an effectual and extensive way. In the United States, Wambere has succeeded on a massive scale in raising awareness about the type of Ugandan policies at work back in his native country. Perhaps best demonstrated by his engagement in the documentary “Call Me Kuchu,” the true and tangible terror that mem­bers of the LGBTQ community face even on a prosaic, basic level were made manifest with the death of another prominent gay activist, David Kato, during the film production of the documentary’s content.

The passage of a bill sanctifying punitive actions towards members of the LGBTQ com­munity and their allies, the least of these cod­ifying homosexuality as punishable by death, marked the beginning of Wambere’s search for external allies and access to resources. It was a unionizing effort on Wambere’s part, and a largely successful one in formulating a discursive environment encouraging engage­ment with governmental policy in different contexts.

As a result of Wambere’s activism, Vassar College’s Amnesty International and LGBTQ Center understood the importance of hosting such a monumental figure in an environment where individuals could be both educated and empowered. Thus, the decision to bring Wambere to campus as a guest lecturer was a dual collaboration between the two entities. As Amnesty International Co-President Laura Wood ’17 explained, “Amnesty International at Vassar tries to raise awareness and fundraise for causes that are committed to stopping hu­man rights abuses around the world. This can be a very broad and daunting task, so we nor­mally try to pick a topic and stick to that issue throughout the semester.”

Wood continued, “This semester we have chosen Global LGBTQ rights. The documen­tary ‘Call Me Kuchu’ focuses on the struggles of LGBTQ rights activists in Uganda. It main­ly focuses on Uganda’s first openly gay man David Kato, who was unfortunately murdered just after filming the documentary. After Ka­to’s brutal murder in 2011, Mr. Wambere began to receive death threats and decided to stay in the U.S.”

Amnesty International Treasurer Chris Halm ’17 described the logistics involved in se­curing a presentation from Wambere on cam­pus: “We reached out to the documentary team [of ‘Call Me Kuchu’] and were able to get in touch with Mr. Wambere. He was enthusiastic when we explained our desire to have him on campus and agreed to come give a lecture.”

Amnesty International’s other co-president, Hannah Ornatowski ’16, similarly described the specific topics and intentions of Wam­bere’s presentation, saying, “We desire to cre­ate a comfortable context in which people can open up about their experience while giving people the means to advocate for policies in Uganda. Students will be given resources to impact outside communities through our asso­ciation with the LGBTQ center for this event because we want to provide a basis of discus­sion for issues surrounding the topic of human rights violations anywhere and everywhere.”

In terms of the general aspirations of Am­nesty International’s involvement with stu­dents on campus, Wood again described the correlated timing of such an event with the current campus climate: “These events are important to raising awareness about global LGBTQ activism. We have an active LGBTQ community on this campus and we have asked them to collaborate with us as well. We believe this is an issue that is important not only to the global community, but also to Vassar campus. Raising money for organizations that fight to end human right violations or support victim­ized parties and also host events like the one supported by John Wambere’s presentation to engage the Vassar community in our mission to learn about and promote human rights is paramount.”

Fortunately for Amnesty International, the ideological goal of identifying and preventing human rights abuses around the world is deep­ly resonant for many students on campus. As Adya Goyal ’19 offered, “It’s so interesting to me that John Wambere is coming to campus and discussing the documentary ‘Call Me Ku­chu’ he was so personally involved in. I think it’s strange that while he, of course, is here due to political asylum status, yet it seems the only crazy thing, at least from my perspective as an individual not engaged in his Ugandan context, is the passage of such a law that acknowledges the existence of homosexuality by death.”

Extending on her idea, Goyal continued, “That’s just so crazy to me, since I associate the idea of insanity with the word asylum. It’s also interesting to note that the word ‘Kuchu,’ used in the film as the identifier for Kato and Wambere’s fellow lesbian, gay, bisexual and transgender men and women, is also so lin­guistically similar to the word ‘cuckoo,’ anoth­er word I associate with disequilibrium and in­stability. Maybe I’m thinking too far into it, but there is a connection there that can be applied into a more ambiguous global metaphor for the connections we exist in relation to others,”

She went on, “Regardless, I’m just really glad that we were able to host John Wambere and even have this opportunity to discuss these types of global issues in a localized mi­lieu; basic as it is, it can be difficult to extend ourselves in ways we’re unfamiliar with and John Wambere is truly a qualified individual to enact such involvement in this poignant cir­cumstance.”

Ornatowski concluded, “Hopefully, we aim to achieve a discourse about personal issues and its relation on campus and to the world community.”