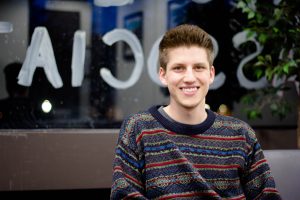 Calvin Lamothe ’17 was elected VSA President on April 7 by the student body. Lamothe will lead the VSA next year with a brand new executive board, consisting of six new positions, as they implement a new restructuring protocol. Photo by Sam Pianello

On May 1, the current VSA coun­cil will hand over the reins to a new executive board, the members of which were revealed on April 7. Not only are the individuals in each position changing, some of the roles themselves are changing, thanks to the extensive restructuring of the VSA accomplished this past semes­ter.

The position of the President, however, will remain largely the same. Calvin Lamothe ’17 has been involved with the VSA since his freshman year, but this coming year he is taking on the responsibility of heading the student government body.

He remarked, “[The VSA] has been such a big part of my life and I care about it a lot, and I definitely wanted to make sure that someone who has a lot of passion and a lot of experience was running it, especially given the big transition that we have coming up with the new structure.”

The most significant change to the structure of the VSA has been the replacement of the council setup with a senate system, in which each class will have an equal number of representatives. Chair of Organiza­tions Matthew Kolbert ’17 remarked, “I love the idea of a senate. It’s much more effective having a set amount of leaders from each class. I think that system works really well, as op­posed to house presidents being on the VSA Senate.”

He continued, “I’ve seen a lot of house pres­idents get really burned out having to be in charge of house programming but also having to deal with campus life issues. I think that this change will both improve class representation on the VSA Senate as well as improve house dorm life.”

The different vice president positions in the current VSA format will be reorganized to distribute responsibilities in a more logical and specific way. Lamothe summarized, “We have made the VSA bigger and smaller at the same time, in that…there are more positions and there are a lot more committees, but at the same time their responsibilities have narrowed a little bit. They’re a lot more focused.” An info­graphic explaining the details of restructuring will soon be available, but until then, the new and old executive officers alike express their confidence in the format.

The new structure has somewhat leveled the playing field since it will be a different format for everyone regardless of previous experi­ence. Every member of the executive board has varying amounts of experience and different motives for running. Some, like incoming Vice President and current Class of 2017 President Apoorva Natarajan ’17, are passionate about the VSA as a student government body. She remarked, “[I] saw the position that we had created as something that really resonated with what I had done, my work in the VSA. [Also] I’d come to care very very much, a troubling [amount], about the VSA in the past year, to the point where I couldn’t see myself not doing it the following year.”

Others, like the new Chair of Residential Af­fairs and current Cushing House Junior Repre­sentative Esin Asan ’17, found themselves run­ning for office in order to help better represent certain issues they care about. That said, they all expressed enthusiasm for the task ahead and are confident in each other’s competence. La­mothe asserted, “I’m super excited. Everyone is definitely ready to jump into their positions and hit the ground running and I’m excited to work with them.”

The recent appointments in conjunction with restructuring may open up opportunities for larger-scale changes. The newly designated Chairs of Committees will be able to take on additional projects as they see fit, given the more focused nature of the position. Asan not­ed, “Now that we’re in the process of change, this is when we can actually make demands, because when something’s in place you can’t really change it but if there’s already change happening you can [add on].”

The executive board hopes to maintain the motivation on current VSA projects like the free tampon initiative and the New York City shuttle service; the roles of the President and Vice President are mainly supervisory. Natara­jan commented, “Most importantly in the na­ture of this role is to make sure that everything works. And we have so many projects that are in preliminary stages that I feel I would be do­ing a disservice to a lot of people by coming up with a new project…without ensuring that any of the existing things are not definitely going to happen.”

The VSA has come under fire in recent months as the campus climate intensified over the controversial BDS amendment and resolu­tion and as fingers pointed at the organization from multiple directions. The main criticism has been that the VSA became a politicized body at the beginning of the school year, though as several council members pointed out, that is hardly anything new.

“I think most of us would agree that the work that we’re doing and that the VSA has done has pretty much always been political, we just ha­ven’t put a name on it,” explained Lamothe. “I think it’s more honest for us to do that; I think we’ll be able to better support student voices in that way.”

However, being a political body does not necessarily have to be a negative attribute. “[I] know it’s been a big, hot-button issue, the whole politicization issue…[but] everyone on exec is committed to making sure that we reaffirm our guiding principles of being an intersectionally feminist and anti-racist organization, and ex­panding on those as well, and making sure that we put a name to the work that we’re doing,” Lamothe affirmed. Current President Ramy Abbady ’16 voiced the same opinion in a recent op-ed for The Miscellany News.

“By ‘becoming political,’ as many are fond of saying, the current VSA Council, the 30th, fi­nally acknowledged this oppressive history and sought to rectify it moving forward,” he wrote. “At the beginning of the year, we adopted guiding principles that sought to center anti-racism and intersectional feminism in our work” (The Miscellany News, “Politicization necessary for effective VSA,” 04.06.2016).

Next year’s Chair of the Board of Student Af­fairs and Co-Chair on the Committee of Equity and Inclusion Cecilia Hoang ’18 agreed, “[I] am proud of our efforts to define and state the pol­itic of the VSA as anti-racist and intersection­ally feminist. I think talking about structures of oppression and situating our positions in them is essential.”

Hoang went on to say, “Acknowledging harm­ful power structures and our participation in them is merely a first step in a life-long effort to mitigate the harm they inflict and imagine more just and equitable possibilities. We should be continuing that work in the years to come by reaffirming ourselves as a political body and following through on that commitment to jus­tice.”

The VSA is meant to serve as a voice for students on campus in the classroom and be­yond. Newly appointed Chair of Academics JD Nichols ’17 said, “Next year, I’m looking to focus on fostering an environment where stu­dents and student groups and orgs can partner with the VSA in order to push for classroom changes that are necessary to achieve the level of inclusion and accessibility that Vassar claims to strive for.” Asan insisted, “Something that people need to understand is that probably one of the only ways that you can engage with the Adminstration is through us, which is strange because it shouldn’t be like that, but it’s also why we exist.”

To be effective liaisons between the student body and the Administration, VSA officers are tasked with establishing open relationships on both sides. A veteran of several VSA offices, Abbady had a few words of advice for the new board. “[R]eally focus on building relationships with students in general and student organiza­tions in particular, as well as the administrators that you have to work with. I think it’s really important to have that relationship, especially when you’re dealing with difficult situations, and putting in that effort in the beginning will pay off in the long run,” he urged in an inter­view.

The new roles that these students take on will not be without challenge, however; being on the executive board is particularly demand­ing both in time and effort. “It’s important for people to remember that we are students first and representatives second,” Lamothe pointed out.

However, they are all committed to their jobs and ready to see what they can accom­plish. Kolbert remarked, “I’m very excited to… hopefully make a difference. I think the VSA is capable of a lot. We are a group of people who are given a lot of responsibility but also a lot of freedom, and I think we can use our power in a really positive way to foster an ideal campus climate and make people as happy as they can be at Vassar.”