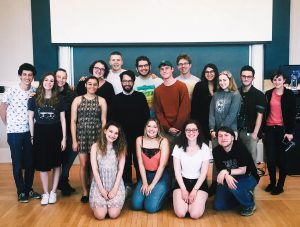 On April 22 and 23, Future Waitstaff of America (FWA) will perform “Fly by Night” in Rocky 200. FWA is excited to gauge the reaction on campus of this relatively new musical production. Photo courtesy of Liv Rhodes

Chances are you’ve heard of “Wicked” or “Hamilton” or “The Book of Mormon.” These were shows that exploded into the pop culture sphere; everyone from your parents to your teachers to even your deli guy knew at least one song. But they’ve probably never heard of or even seen a little show called “Fly By Night.” However, everyone at Vassar has the opportunity to do so.

On April 22 and 23, Rocky 200 will be the platform for “Fly By Night,” the first show of the semester for Future Waitstaff of America (FWA), Vassar’s musical theatre student orga­nization. The show is directed by Liv Rhodes ’18, music directed by Michael Oosterhout ’18 and stage managed by Lydia Wood ’17. There will also be an open dress rehearsal on April 21 for anyone to attend.

“Fly by Night,” which originally premiered Off-Broadway in 2014, follows two sisters, Mir­iam (Cyndi Bonacum ’16) and Daphne (Daisy Walker ’18), and a sandwich maker, Harold (Myles Olmsted ’19), caught in a love triangle in the Manhattan blackout of 1965. Running around two hours, this show is both funny and heartbreaking. With a beautiful soundtrack, “Fly By Night” gives the audience a full expe­rience.

After stage-managing one of FWA’s shows in the fall, Rhodes decided to take on a more authoritative role for her next project: “Last semester, I knew I wanted to direct a musical. So, I was looking into shows to do, and stum­bled across this one. I had the requirements of something funny, something with a small cast and something with the rights easily accessi­ble. This show kept coming up again and again. There were a group of people already willing to do a project with me and my amazing stage manager, Lydia Wood, so we had to pick some­thing. On a whim, I ordered the ‘Fly By Night’ script, read it and loved it. We decided to just go for it.”

Last Sunday, one of the writers of “Fly By Night,” Michael Mitnick, visited Vassar for a Q&A session. In the discussion, he talked about his creative process behind writing the show as well as career advice for those wishing to have a life in theatre and media. Seeing Mitnick in person gave the cast insight into his creative processes and the vision he had for the show.

Mitnick wrote “Fly By Night” with Kim Ro­senstock and Will Connolly when the three were grad students at Yale School of Drama in 2009. Mitnick also currently writes for HBO’s “Vinyl” and was the screenwriter for the film adaptation of “The Giver.”

Since “Fly by Night” is fairly new, this pro­duction has the rare opportunity of presenting a show without any preconceived notions on campus. Elaborating on this special situation, Oosterhout said, “The benefit of doing a rela­tively unknown Off-Broadway show is that the audience comes to it completely unknown, in the dark, so to speak. And our actors and mu­sicians are the storytellers, the stars who light the way. The audience response in our pre­views so far has been incredibly heartening: laughter, weeping, thoughtfulness and more. The characters in this show are fully fleshed human beings with deep emotions, whom our actors bring to life off the page through the power of music.”

One of the additional aspects of this show will be the band that will be playing along­side the actors, which will allow for more of a Broadway feel to the show. Oosterhout will also be playing piano in the pit band with three other musicians. He described the benefits of working with this small group: “Truly, there’s no more fun role in a show than being a pit musician. I have the pleasure of working with a small band of guitar, bass and drums, where my role is to play piano and conduct. Working with the pit is a completely different process than with the actors.”

In an active choice to draw more attention to the story, the set has been simplified. Rhodes elaborated, “As we are in an alternative space, and the show is very fast paced, I decided for a minimalist design scheme. It is a period piece, taking place in the year between 1964 and 1965, so we wanted to bring simplicity through retro design.”

Earlier in the semester, FWA held their semi-annual cabaret, which featured a preview of FWA’s roster of shows this spring. In the cab­aret, the cast of “Fly By Night” performed the title song, which is also the opening number of the show.

Harold’s dad, Mr. McClam, is played by Nic Penn ’19. According to him, uniting the cast and crew of this show has made a tremendous dif­ference. “Incorporating musicians has been a dream. Having Michael, our music director, at practically every rehearsal has been superbly helpful. It allows us to run things at our own pace from the get-go, rather than relying on a recording, a luxury I’ve never had. It’s also al­lowed for much more individual work.”

FWA’s other show will be “Rocky Horror Picture Show,” the original musical which was eventually adapted into the popular 1975 film. That show will be going up the week after “Fly By Night.” Both of FWA’s shows provide rare opportunities, one being a new show rarely performed and the other being a show well-known but rarely seen in its original form. “Rocky Horror” and “Fly By Night” are very different in their content, but there is some­thing for everyone in each.

“This show is quirky, hilarious and also trag­ically sad. It’s a piece of goofy musical theatre that speaks to the truths of loss and sadness that we all experience. It balances melancholy emotions and humor in a wonderful, unique and balanced way, and that meaning made me really want to work on this show,” Rhodes said about the universal qualities of “Fly By Night,” transforming it into a glissando of emo­tions. “This exciting work is something that will touch all audiences. It speaks to family, to the importance of music and perhaps most importantly the impact of both love and loss. Through these heavier moments, audiences are still sure to be laughing.”