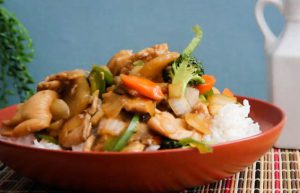 Courtesy of All Recipes

What is stir fry? According to my highly accurate and reliable source (Urban Dictionary), among many other definitions, “stir fry” is “an eastern food, usu. comprised of noodles, meat and vegetables.” Well, friends, I am here to debunk the mystery of what stir fry, specifically Deece stir fry, is and what it can be.

Stir fry originated in the 18th century, half­way across the globe, as a method of quick­ly preparing food that people were scared would go bad if unprepared. Has that broc­coli been sitting in the back of the fridge for a week already? Great! Toss it in.

Stir fry was actually thought to be the most tasteful and classy way to dispose of left­overs, and people with better stir fry skills were considered to be wealthier and thus more eligible for marriage. It also helped, of course, that those people had access to a reliable stove, which was a rare commodity back then.

Original ingredients included corn, wheat, hawk meat, blades of grass and occasionally a few teeth. Or in otherwords, the quiet re­mains of pretty much the most badass fight nature has ever seen It wasn’t until 2001 that stir fry made its way to the Deece. The hawk escaped from the pan, bringing with it a few stray blades of grass two centuries worth of honed stir fry knowledge.

Since these discoveries, the Deece has tried many variations: tofu scramble, chick­pea cauliflower stir fry, Indian spiced tofu saute, veggies soaked in too many spices, etc. The list truly goes on.

They also, of course, invite you to design your own stiry fry masterpiece. Peppers, on­ions, carrots are always included in the usual layout, but sometimes there’s vegan chick­en, or “toasted barley” or…God forbid…kale. Don’t get me started on kale. I’m sure plenty of people are okay with this vegetable but I prefer it as a saying on Beyonce’s sweatshirt.

But I digress. I have seen people real­ly whip out their Master Chef skills when they’re standing at the stir fry station. Grant­ed, my idea of fancy is adding salt and pep­per to the skillet. That being said, my life, at least the part of my life when I have to feed myself, revolves exclusively around stir fry.

The first time I stir fried was second se­mester sophomore year. Previously I had been too cowed to try my hand at such a (seemingly) complicated way to throw to­gether my own dinner. I’m all about instant satisfaction sod heading straight to anything pre-prepared is my go-to method at feeding time.

One of my friends, however, was not to be deterred by my insistence that pizza was toatally a vegetable, and therefore healthy, and therefore a perfectly nutritious and de­fensible diet for the past year and a half. She was the savior who taught me the beautfiul ways of stir fry. How you pour the olive oil in and add onions first…gotta give them time to brown…and then you add peppers and, well, I’ll grant you insight into my practiced meth­ods later on.

When I got home that summer, then, it was a good thing my friend had taught my how to stir fry because I quickly realized my parents were no longer willing to make my every meal.

I turned on my stove at home and sure shocked them (probably the main reason be­ing that I hadn’t set off the fire alarm). The worst part of stir frying at home was that I had to chop my own vegetables–they didn’t come pre-chopped like they do at the Deece. So, for once, I’ll hand it to you Deece. You sure know how to present small pieces of vegetable in an easily accesible way.

Basically, stir fry is a way of life. It’s a rel­atively painless way to create a warmed up salad. Actually, now that I think about it, have you noticed the ingredients at the salad bar and at the stir fry station are eerily similar? There’s less kale at the salad bar, though…

Turn heat all the way up on the stove (I’m serious; I don’t like waiting for my food).

Sometimes at this point I’ll grab two plates: one of food to eat while I’m stir frying to hold me over until the stir fry is done, the other to collect my stir fry ingredients.

Pour enough olive oil in pan to coat the bottom and add onions.

Occasionally stir onions. Try to stay away from the stir fry area at this point because watched onions don’t cook. Seriously.

Take pan off heat and pour contents carefully onto plate. Usually I’ve filled the pan with so many vegetables my plate overflows a little. I have trouble with proportions sometimes. Last but not least, consume your stir fry. One more step: enjoy!