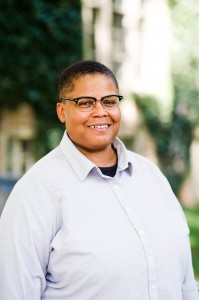 Keeanga-Yamahtta Taylor came to Vassar on Tuesday, April 19 with the aim of sparking a discussion of the pressing issues of police brutali­ty and racial discrimination ongoing in the #BlackLivesMatter movement. A race and public policy expert, As­sociate Professor of African Ameri­can Studies at Princeton University and academic studying Black poli­tics, the Black radical tradition and social movements holistically in the United States, Taylor was brought to campus to discuss her forthcoming book “From #BlackLivesMatter to Black Liberation.”

For Savannah Smith ’19, Taylor’s lecture provided a fresh perspective on life as a Black American. “This en­ables us to have a wider lens through which to analyze, but through this, I have been extremely critical of what it means to be Black in America,” she said. “The thought of what true equality would look like always leads to me to see it as an impossibility under the current political and eco­nomic system in America. Keeanga Taylor’s book and lecture essentially answered my questions and enabled me to have the language to articulate these thoughts and views of mine.”

Professor of Africana Studies Zachariah Mampilly knew he wanted to incorporate her work into his curriculum the first time he was exposed to Taylor’s work. “I first encountered Keeanga’s writings in the journal Jacobin,” Mampilly explained. “As someone deeply in­terested in the Black Radical Tradition, I was excited to see a new voice deploying this ex­traordinary intellectual tradition to explore contemporary social phenomenon.” Mampilly said he reached out to Taylor in the fall and was fortunate enough to secure her visit to Vassar before her book came out. “The attention the book has received has been extraordinary and Keeanga has emerged as one of the most in-de­mand speakers in the country,” he said.

The connection between current class con­tent and Taylor’s lecture helped Smith and fel­low classmate Tamar Ballard ’19 to follow more easily. Ballard said, “I was excited about the lecture because we were reading her book in my Africana Studies class, so I thought it would be a good opportunity if I could hear, direct­ly from the author, about the thought process surrounding the book.” Ballard went on, “It was definitely nice to put words to a face in a sense. It’s one thing to read someone’s writing, but to actually be able to see how passionate they are about a specific topic and get more background information surrounding the purpose and influ­ence of the book was something I thought gave a little more humanity to the book.”

At the same time, Ballard explained that the wealth of knowledge that Taylor brought with her was hard to follow. “It got kind of difficult to read Keeanga in the book while simultane­ously trying to wrap your head around the bulk of information she gives.”

Tatiana Santiago ’19, though excited at the opportunity to engage with the author of her class’s current studied novel, admitted a de­viation in ideology from that identified with Taylor’s Black Marxist ideology. Regardless, Santiago conceded, “I really appreciated that Professor Mampilly brought her into our Afri­cana Studies class.”

As for Mampilly, the set of expectations he hoped his students would achieve inculcated it­self in a holistic acknowledgement of individual cosmology and universal engagement. He said, “The Black Radical Tradition is drawing re­newed attention due to its ability to help make holistic sense of the dominant trends in Amer­ican political life, from the brutality of policing and the carceral/security state to the injustice of economic inequality. By allowing students to engage with a leading voice of Black radical­ism, I hope that they can understand how their individual experiences with racism or classism are not solely about interpersonal animus, but rather emerge from the contemporary config­uration of economic and political power that structures our social life.”

However, it is difficult for students, at the same time, to agree wholeheartedly with Tay­lor. Smith explained, “Even though I agree with a lot of what Keeanga says and I believe that her book is an important one to read when thinking seriously about what Black liberation means, I think it is equally important to challenge what has been presented critically, because I believe you learn more from questioning material crit­ically as you do from accepting what is written as truth.”

Ballard approached the presentation with an equivocal understanding of the necessity of fil­tered contexts in understanding another’s ideas and expressions. Specifically, Ballard discussed the benefit of engaging in both an in-class Q&A session as a student and attending her lecture as an observer: “It was a good opportunity to be able to see Keeanga and hear her talk about her book in her own words, especially since books (by nature) have to go through some kind of editing process (even if it’s a little), so it was a opportunity to get her raw opinion on things inside and outside of the book.”

Mampilly explained that Taylor’s presenta­tion was both a representation of her book of the same name as well as an offering of her own experiences. “The presentation touched upon many of the themes within the book–the failure of a Black elite to produce change for the ma­jority of black people; why poor whites should make common cause with Black people and other people of color; the limits of identity pol­itics; and the need for a broad front to challenge the contemporary capitalist order. Keeanga is a participant within the long tradition of Black Marxism and her words in speech and in print seek to make sense of racialized capitalism in the United States and its legacies.”

Regardless, the sense of active understand­ing and worthwhile discussion on such nu­anced and connotative topics was meaningful for all involved. Especially among this sample, though, was Mampilly’s position as a partic­ular moderating role and conducive liaison. Mampilly’s opinion on the most rewarding aspect of the event speaks to his pedagogical and dually paternal experience: “By far, having Keeanga join the Introduction to Africana Stud­ies class was the highlight. After a very brief presentation, students bombarded her with nu­anced and thoughtful questions about diasporic consciousness, Black radicalism, identity poli­tics and so much more. Not all were convinced by her arguments, but the session itself was one of the most interesting I’ve participated in as an academic. Keeanga was highly impressed and my students made me proud.”