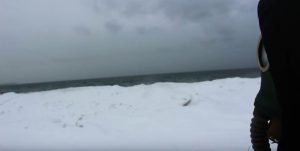 Pictured is a shot of the Great Lakes from ColinCederna ’16’s Environmental Studies documentary thesis. In it, he addressed issues of climate change as it pertains to the Great Lakes. Photo courtesy of Colin Cederna

Recognizing the threat climate change pres­ents in the Great Lakes, Environmental Studies major and Michigan native Colin Cederna ‘16 set out to explore the problems impact­ing the region in his documentary film thesis. What he first thought of as a film consideration of climate change in an area of personal impor­tance quickly became a historical piece prob­ing different issues relative to the environment plaguing the Great Lakes.

Cederna described his initial ideas for the documentary saying, “I’m from Michigan, so I’m really passionate about the Lakes. In my town, I was surrounded by a lot of climate change deniers. So my reaction was to show them that this is real and that really high­ly-aware, educated people are talking about this and not just studying about it, but acting on it. It turned into something different but something that I think is really important for awareness.”

Climate change is never once mentioned in the film. Instead, Cederna focused on the envi­ronmental history of the region as well as the unpredictability of the Great Lakes and the en­ergy resources considered in its future. “Right now there’s an energy movement going on in Michigan with these old coal plants dying out and thinking about what’s going to take over. People are saying natural gas but that’s not where we should go. We should move to solar and wind and water power rather than contin­ue to burn these dirty sources.”

Cederna spent a year exploring the realities of environmental issues in Michigan as he pro­duced his thesis documentary. Before finally cutting and editing his film together, he inter­viewed nearly 75 Michigan locals and environ­mental scientists from the area, filming nearly 50 of them in conversation.

His network of contacts and interviews ex­panded as a result of his uncle, a connected barber in Ann Arbor, MI.C ederna said, “My uncle and I were talking about the film and he said he knew this great guy—Paul Webb—who studies fish and he’s pretty famous. We met at a coffee shop and Paul Webb gave me five peo­ple. I met those five people, started interview­ing and those people sent me to more people. It expanded but only nine interviews made it because I found my thread—the story I wanted to tell.”

Cederna said the production process boiled down to one question: “How was I going to convey those messages and what the people in those interviews were saying?” As a large­ly self-taught filmmaker, he didn’t have many of the professional tools necessary to shoot a film. Rather, he relied on a friend with a drone company who filmed high above urban Detroit. Cederna himself shot additional B-roll using his personal tripod.

Cederna’s thesis transcends just the Envi­ronmental Studies Department. His advisor and Professor of Geography and Chair of Earth Science and Geography Mary Ann Cunning­ham said, “His work is incorporating ideas that come from environmental science classes and ideas that come from policy and politics and also ideas about how different cultural groups understand the environment differently. I think that the integrative thing is important.”

The result of all of this work is an approx­imately 40-minute documentary film thesis entitled “The Water Lords” that has aired on YouTube. The documentary itself is broken into four parts: Part I – The Invaders, Part II – Fallout, Part III – Fossils, and Part IV – Sharing.

Throughout the piece,Cederna was not afraid to approach authorities and locals alike. For instance, in Part IV, Cederna spotlights a community living in the Michigan basin where the water is currently carcinogenic and un­drinkable. For that reason the community has requested water from Lake Michigan. Cederna said, “I have competing voices—the mayor of that town and the mayor of other towns saying why we should or shouldn’t do this. So, it’s a history.”

The four parts of the film are connected through music. Cederna collaborated with Vas­sar musicians and professors, bands from his hometown and sounds he himself filmed. He worked with Zach Kondak ’16 to create an or­gan soundtrack as well as harpist and Adjunct Artist in Music Ashley Jackson on a harp re­cording. A man on the streets of Chicago be­came his third music track. Cederna himself rapped in the fourth track. He elaborated, “My friend in high school that had a band made a really cool EP that I liked that never really blew up. He doesn’t sing on it. But I like to rap to it. Over the winter, I went to a studio and record­ed over that instrumental and that’s the final track in the film.”

Of the experience as a whole Cederna said, “It was really cool to do the whole thing—to have the idea, to network with so many peo­ple (time-consuming but really rewarding; I met with a lot of famous people who are real­ly influential in the science, political, activist worlds), then to edit and to create and select the music.”

Cunningham added, “Environmental Studies also tries to help students find a way to take action on environmental issues and obviously a documentary film is very much doing that. And so, I think that it is a good example of the kinds of things the department likes to encourage.” Cunningham may have asked Cederna ques­tions to keep him on track, but she reflects that the documentary spotlights Colin’s own voice.

Cederna hopes that the film is both an en­tertaining and educational motion picture, a medium he is particularly drawn to. “I want to do environmental activism and film as a me­dium to spread whatever cause I’m doing,” he said. “I’m really interested in energy transfor­mation right now. And in this film, there’s a lot of people who are really passionate about these things like nuclear power telling their stories were voices that need to be heard.”