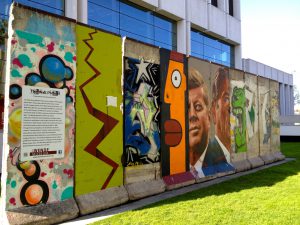 Audiovisual Archivist at the Wende Museum in Culver City, CA, Kate Dollenmayer, gave a lecture on April 20. While she was hosted by the German Department, her lecture was multi-disciplinary. Photo courtesy of Wanderlust in the City

“I’d love to see more speakers who illumi­nate similarly neglected aspects of the German past in order to show that German cul­ture is much more complex and heterogeneous than many people think.”

That, according to German Fellow Lea Vogtt, is exactly the draw of Kate Dollenmayer’s lec­ture on April 20, hosted by the German Depart­ment. It wove together German history, Cold War Politics and the intricacies of film.

The Audiovisual Archivist at the Wende Museum in Culver City, CA, Kate Dollenmayer is an advocate for grassroots cultural heritage preservation and additionally draws on experi­ence as an educator, filmmaker and editor. As­sociate Professor of German Studies Silke von der Emde invited her to speak about the film class she’s teaching, “Cinema Behind the Wall.” Dollenmayer showed films from two catego­ries: home movies and movies produced by the East German government. She showed them on two old projectors, the way they would have been shown in the German Democratic Repub­lic (GDR).

Dollenmayer’s lecture did not merely re­peat a well-known discourse on Cold War East Germany—it gave insights into the often ne­glected aspects of everyday life of the people who actually lived in the GDR. Von der Emde described the experience: “Kate Dollenmayer took viewers on a surprisingly lively journey through a neglected corner of aesthetic histo­ry: the non-theatrical films of communist East Germany.”

Vogtt found the lecture a fascinating ap­proach to the subject. She explained, “Kate took authentic material which you would never see in any history book. It was not just inter­esting because of what was shown but because of how she presented this material. She neither provided a ‘real’ lecture, nor did she attempt to present the films as parts of a coherent narra­tive, but she let every film speak for itself.”

Students did not have to have a specific affil­iation with the German Department to appreci­ate Dollenmayer’s work. Ethan Moses ’17 heard about the lecture from von der Emde, and was blown away by the sheer emptiness of the city of Leipzig captured in a driving instructional film. He recalled, “I would have loved to see more home movies—they are so hard to pre­serve and teach us so much about the texture of East German culture at the time.”

Dollenmayer’s lecture was compelling in large part because of the aspects of life that it revealed that aren’t covered in textbooks. Vogtt, who grew up in West Germany, found that the lecture gave her new insights into her own country’s history. As she said, “We talked about Germany’s Nazi past a lot at school be­cause it still is the big cultural trauma of the German people. While this is, of course, very important, I think that the more recent German past is often neglected as a consequence. Kate managed to bring a bit of it to light, and I really want to learn more about this part of my coun­try’s culture and history in the future.”

Faculty and students from multiple depart­ments attended the lecture. Von der Emde recalled, “One of my colleagues in Russian met with Ms. Dollenmayer the following day to talk about materials from the Soviet Union that are housed in the Wende museum and that Kate Dollenmayer also curates at the museum. There were lots of connections to Cold War history and culture in Germany and Europe.”

Chris Slanger ’19, a biochemistry major, was most interested in the Cold War aspect of the lecture. He found that everything he saw and heard was new information to him and loved watching the films on 35mm film projectors. He said, “From the lecture, I learned how much of German cinema was influenced by the gov­ernment. I did understand that the government was very controlling, but I did not realize that they funded many movies to be made, such as educational or labor films.”

While many attended who were already fa­miliar with film or German history, others like Moses and Slanger went in large part because they don’t study this topic in the classes they usually take. Moses said, “I couldn’t really do the lecture justice. I encourage any students who have even the tiniest interest in anything from German history or film to check out the archive at the museum’s website.”

Even for those familiar with the topic al­ready, these archives from which Dollenmay­er pulled the videos for her lecture hold ma­terial hardly anyone has seen before. As Von der Emde pointed out, “These films have not widely been seen at all, neither in Germany nor here. It’s fascinating material that gives insight into everyday life in the GDR and is a great ad­dition to the official feature and documentary films.”

Voggt hopes this lecture will begin a chain of similar, multi-disciplinary lectures. She said, “There is no lack of fascinating people coming to Vassar’s campus, people who can capture the attention of everyone, from biology majors to philosophy students.” One example she provid­ed was a graphic artist the German Department is hosting next fall for a three-week residency where she will work with students on artist books and show materials on women artists in Germany. Lectures like Dollenmayer’s make students think about subjects in unique ways. Vogtt concluded, “I hope it encourages them to engage with German culture even more, and to appreciate the ‘everyday’ historical artifacts we leave behind. After all, the ‘little things’ like educational videos are just as much part of our culture as the ‘big artifacts.’”