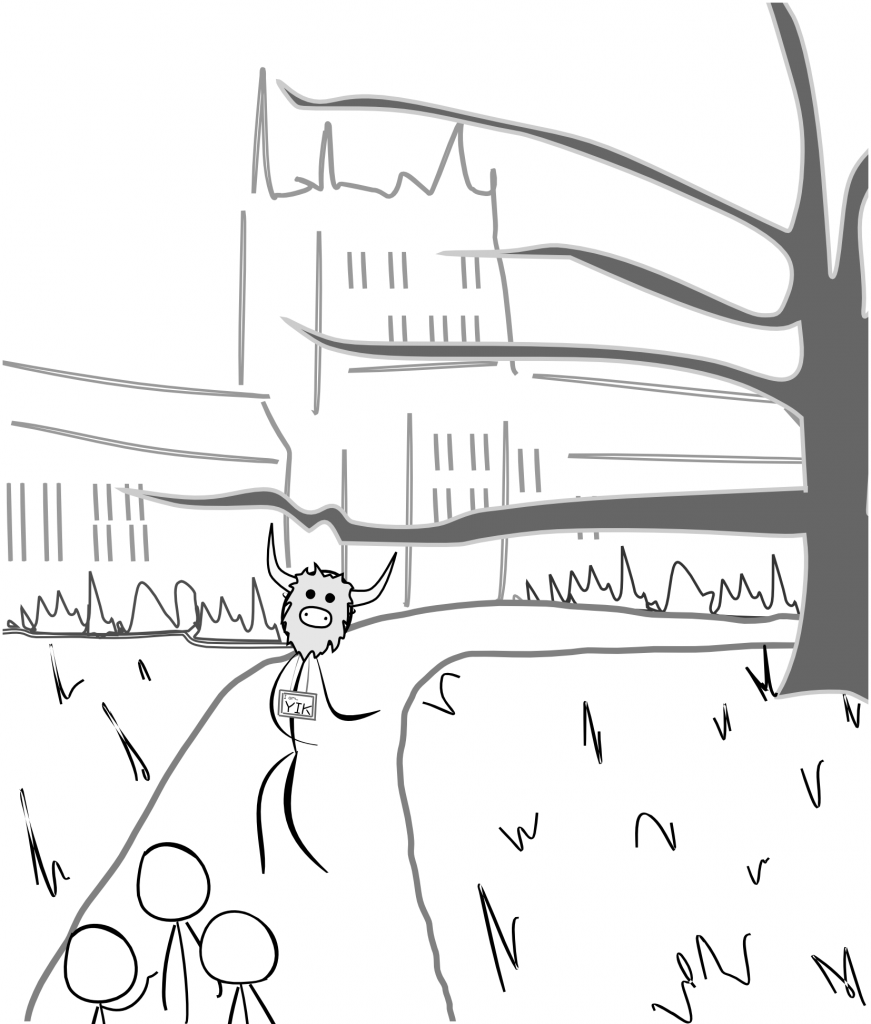 Hi everyone! My name is Yik Yak and I’ll be showing you around Vassar College today. Don’t worry about the mask; it’s just to make sure you don’t know who I am. Since you guys are here just to skip school, I’ll tell you things about Vassar that actually matter. If I buffer or anything like that, just make sure to refresh. Ev­eryone good? Okay, let’s start the tour!

So the first spot on our tour is the quad, where a lot of students stay on campus. Stu­dents are guaranteed housing for their first year, but for the other three years here, you have to deal with a broken lottery system. It’s not the most tightly run operation and I would say the only thing that frustrates students more than room draw is their pre-registration results for next semester.

In any case, Vassar has a total of nine dorms available on campus. If you look to your front, you’ll see Jewett going through its third fire alarm this week. If you’re curious about the cause of the fire alarm, either someone smok­ing weed, someone burning toast or someone burning weed in a toaster. Get used to that loud ringing, everyone, because you’ll be hear­ing lot of it at Vassar. I guess we can’t check out the Jewett rooms now, so let’s head to Ray­mond.

Now, everyone will tell you how each dorm has its own unique strengths and weaknesses. I personally don’t know what the strengths are, but the weaknesses for all of them are the mice and cockroach infestations. Actually, Cushing has a bat, so I guess that’s special. For those of you wondering if the administration will do anything about this problem, don’t raise your hopes. That’s probably the most important thing I’ll say on this tour.

As you can see by all the disrepair around you, the administration has a bone to pick with Raymond or something. They recently released a detailed plan on all the renovations that will happen for the next several decades and Raymond didn’t appear even once in that 40-page document. The only good thing I can think of is the fact that everyone here gets a single, but that’s only because all the former residents are hellbent on leaving. Alright, let’s get out of here before we all get cholera. Don’t forget to say hi to the Rat King on your way out.

The next stop is the Deece, where all stu­dents are expected to eat but no one really wants to. It’s pretty mediocre most of the time, but at least the mac and cheese makes up for it. The Deece is separated into two sides, a big side for teams of athletes and a small side if you’re scared of the big side like me. Seating is always difficult to find, so I recommend sneak­ing the food and silverware out like everybody else. By the way, don’t eat the fish, even if it has a really fancy name. It’s all the same shitty fish.

Here we are at Main building where most of the administration offices are located. They’ll send you a lot of direct-to-trash emails over the week. If you see the words “Arlene Sabo,” “Jeff Horst” or “In-the-Pink,” just go ahead and recycle those. They’re always about the latest sprinkler repairs or robbery at the TA’s. As we exit, make sure to wave at the good people of the CIS. They’re the ones in charge of the ab­solutely wonderful and nonexistent WiFi here on campus. It’s the only thing on campus that’s more unstable than my emotional well-being. If you have a paper due tomorrow, have fun staring at the network connection lost screen for several hours. Don’t worry, CIS will send an email warning you about it the day after.

Okay, it wouldn’t be a real Vassar tour if I didn’t mention that horizontal tree branch, so here it is. It’s the longest unsupported branch in the world, but then the Guinness World Book of Records caught us with the wire sup­ports and banned us. In honor of our attempt to cheat the system, we like to tell every tour group about it to get a small laugh out of them.

Finally, here’s the library. This is where stu­dents go to start that 10-page essay that’s due tomorrow or have their weekly existential cri­sis. If you look to your left, you can see one student questioning every decisions he made in his life and contemplating quitting school and being a male stripper. Don’t worry buddy, you can’t escape even if you wanted to.

As we’re approaching the end of our tour, I’ll talk about Vassar’s vibrant social life. Over the weekend, all the parties and drinking hap­pen in the Town Houses. You’ll quickly discov­er that alcohol is the only thing that’s keeping us alive right now. TH 114 is especially lit on weekends, so make sure to check that shit out. If you’re not at the TH’s on a Friday night, chances are that you’re sitting alone in your room crying about how you don’t have any friends. Don’t worry, everyone does it. And yes, the social scene here COULD change, but no it won’t.

Oh shit, there’s campus security. With that, I have to run. I’m really not supposed to be on campus and the Bias Incident Response Team is currently trying to find me. But one sec, does anyone have a kik?