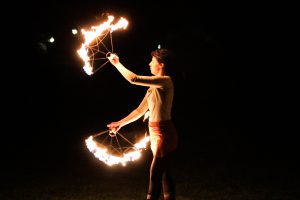 Last weekend the Barefoot Monkeys hosted their sixth annual Monkey See Monkey Do Juggling and Fire Arts Convention. It is one of the largest conventions of its kind. Photo courtesy of Jackson Hardin

Were you wondering what all of those ar­rows drawn in chalk were for last Satur­day? The Barefoot Monkeys were hosting their sixth annual Monkey See Monkey Do Juggling and Fire Arts Convention, the largest event they hold all year. Grand Monkey of the Bare­foot Monkeys Margaret Ginoza ’16 explained, “It was interesting because in previous years we usually use the Walker Bays for our event, but this year we got a little bit creative with our spaces and we used a combination of the Villard room, the Aula and UPC. So we basi­cally distributed workshops across these three venues.”

The Barefoot Monkeys began as a group of five jugglers called the Vassar College Jugglers. Ginoza said, “Since then, it’s expanded into the Barefoot Monkeys and we do a lot more than juggling. We do fire spins and other circus events. We now have around 60 to 70 active members and our last show had 52 people in it. And there are more active members who aren’t in every show but we’ve grown signifi­cantly from the five-person juggling club this started out as.” She went on, “We put on some of the largest college fire shows that exist, as far as we know. We definitely have one of the largest college circus programs of its type. And we’ve been getting a lot of recognition, which is pretty cool.”

This type of convention is not anything new for the Monkeys, since they have attended sim­ilar conventions at other schools and hosted their own six years in a row. “It was started before I was here and its grown a lot and it’s become bigger I think. We normally see around 150 people,” Ginoza said. “There’s one at Wes­leyan that we’ve been to, we went to one re­cently at Tufts and there was a brand new one at Hampshire. But ours, as far as we know, is the one that has been running consistently the longest.”

This year was a new experience for Ginoza, as she had to take on an administrative role in organizing the convention. “There’s a team of us, a bunch of people who have been planning this since the beginning of the year,” Ginoza explained. “There are the convention heads, around six of us who handled the logistics. There are some other people who are the com­mittee heads who took care of certain different aspects of the convention. For instance there’s workshop committee, a performance commit­tee and so on. So all of these people have been working together to contact performers, con­tact teachers, get all the paperwork filled out get all the logistics and spaces organized. Peo­ple had been making sure we have volunteers for every space and that the people who came had places to stay and all that.”

She went on, “I was pretty excited to see it happen because in previous years I’ve gotten a chance to participate without having to worry about logistics and preparation,” Ginoza said. “And this year I’ve been more involved with that kind of thing so I’m really looking forward to it happening.”

The convention featured teachers, students and alumni alike. Lily Carruthers ’19, a mem­ber of the Barefoot Monkeys said, “There was a good mix of workshops accessible to begin­ners, but it did feel that there was a lot to be gained this weekend by people at any level. I really love how I encountered so many peo­ple who were enthusiastic about teaching new skills to those around them.” Ginoza added, “A lot of Barefoot Monkey students from Vassar are involved, either teaching workshops or do­ing performances and also just attending work­shops and performances, hanging out, having a good time and learning a lot of new things,” Gi­noza said. “We have teachers that we’ve invited in from all over the country as well as perform­ers. In previous years, we’ve had people come from as far as Australia.”

Carruthers went on to say that the conven­tion was one of the highlights of her year. “Con­vention was one of my best weekends so far since being at Vassar. As a freshman who didn’t have much circus-related experience before Vassar, this was an excellent opportunity to try many new things and observe very experi­enced (and even professional) performers,” she said. “I’m looking forward to next year when I will hopefully have more skills to build off of.”

Ginoza concluded that her first time as an administrator of the event seemed to be suc­cessful. “The performance on Saturday night happened at the Aula and we had fire spin on Noyes circle so it was interesting to see how the logistics worked out as far as location and how people find their way around and things like that,” she said. “We got a lot of people who were really excited about coming. It was free and open to the public; we had an online regis­tration for non-Vassar students who attended.”

She added, “The fire jam had really well-known fire spinners so that was great as well. We get a lot of alumni to come and participate, and we have a pretty strong involvement from alumni especially people from around the area that live nearby.” For the Monkeys, the conven­tion is not just a chance to showcase their tal­ent, but to reconnect with old alumni as well as learn new techniques from experts around the world.