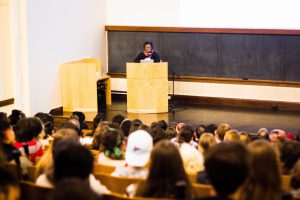 Claudia Rankine, acclaimed poet and activist, came to campus last week to discuss her latest book, “Citizen: An American Lyric.” Her talk was met with mixed reviews from students. Photo by Sam Pianello

Acclaimed author Claudia Rankine took the stage and the crowd in Taylor Hall burst into eager applause. An hour later when she stepped off the podium, the excitement and care-free anticipation which had filled the room had vanished. In its place, there entered a profound discomfort. Attendants slowly rose from their seats and soundlessly filtered out of the auditorium.

Professor of English Amitava Kumar believed these feelings of discomfort stemmed from Rankine’s hard-hitting poetry. He said, “Rankine’s writings are meant to jostle us out of our complacency. You felt it in the air that night, the disturbance.” At the lecture, Rankine read from her most recent book of poetry, “Citizen: An American Lyric.”

The work gives voice to the struggle of Black Americans confronted with white supremacy. American writer and theatre critic Hilton Als said of the work, “It’s the best note in the wrong song that is America. Its various realities, mistaken identity, social racism, the whole fabric of urban and suburban life are almost too much to bear, but you bear them, because it’s the truth.”

In his introduction to the author, Kumar commented on Rankine’s successes and noted her unique ability to describe our present moment. “She has laid bare the current rift in time; the moment that stretches between the promise of a dream and its denial; the season that falls between injury and sorrow, or sorrow and its erasure; the time that turns us from mere spectators into mourners; the implausible moment that divides the instant the bullet has left the policeman’s gun and the instant before it enters the body of a 12-year-old. Words will not stop the bullet. Alas, nothing can. But the words that Rankine writes crowd the space as witnesses who will not, cannot, turn away. These words, like us, are citizens,” said Kumar.

Kumar’s analogy of words as witnesses is especially appropriate given that Rankine’s work interlaces visual and verbal art forms. Rankine began her lecture with a reading of her first poem in “Citizen,” “When you are alone and too tired even to turn on any of your devices, you let yourself linger in a past stacked among your pillows.” A photo of David Hammons, “In the Hood” was projected onto the wall behind her.

The photo serves as the cover art for her book, which is an empty black hood cut off at the neck, strung with steel wire and hung on the wall. The top of the hood is pointed, as Rankine said, to be a reminder of the violence of the Klu Klux Klan. Many of the poems which appear in “Citizen” are written in the second person, lending an immediacy and intimacy which makes it hard to look away.

After telling several personal anecdotes explaining some of her poems, Rankine moved to a discuss the roots of micro- and macro-aggressions perpetrated against Black Americans on a daily basis. She pointed to conscious and unconscious segregation as the basis of modern racism. “How do we decide who to marry, which neighborhood to live in, what jobs are open to us? We are separated. There is a tension and awkwardness in our interactions that leads to hate, and sometimes to violence,” Rankine said.

These comments sparked a perceptible discomfort in the audience which bubbled to the surface when it was time to ask questions. Rankine’s lecture abruptly transitioned to a collection of footage showing racist police brutality. Unarmed black men and women were asked by white police officers to identify themselves for no other reason than their skin color, to step out of the car with no legal reason. In several videos police officers shot unarmed black men as they held up their hands, reached for their wallets to show identification or ran away.

After the video, Rankine gave brief closing remarks and offered up the floor to questions. The first person to speak up said, “You showed us misery with no hope.” Whether or not it was a sentiment that was echoed in the minds of many audience members, the speaker had made an impression. Rankine responded diplomatically, saying that while her work was meant to invite conversation, she believed her message was in fact hopeful.

Hannah Matsunaga ’16, who attended the lecture, was dismayed by some of her peers’ response to Rankine, “I think some people used her appearance as an invitation to work through their own feelings on anti-Black racism and demanded she speak as a spokesperson for Black pain and trauma. We never engage with the work of white artists in this way.” Perhaps other members of the audience felt that way too, because the next question asked was about Rankine’s artistic process.

Kumar was caught off-guard by several students’ comments in the Q&A period. He said, “I was surprised at the racially polarized nature of some of the questions afterward, suggesting that common ground is unreachable between citizens of different races. We read Rankine in two of my classes and felt that the fruitfulness of our discussions depends on our capacity to bridge differences of many kinds, including race, at least in our imaginations.”

One significant impediment to bridging the racial gap on campus seems to be the homogeneous racial makeup of its student body. “You are speaking to a room full of predominately white bodies,” one aggravated audience member told Rankine in the Q&A session.

Yet Vassar’s homogeneous racial makeup is only one obstacle among many for students to hurdle who are interested in bridging the gap between racial differences. Kumar noted another complication, that politics at Vassar seem to be defined and delineated as the politics of the oppressed. He said, “What has struck me about politics at Vassar is that it is often articulated only as the politics of the aggrieved. And to gain legitimacy for the voicing of such protest, folks–whether they are faculty or students– sometimes think it is necessary to confuse the classroom for the street. That the armed cop on the street i===s the same as another person in the classroom who happens to have a different skin color than you is a politics of performance for which I have very little patience.” Kumar is suggesting that potential dialogue is stifled by students’ reluctance to tame their imaginations.