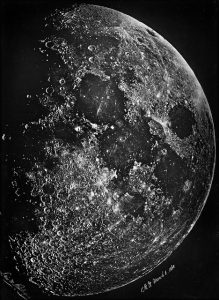 From April 29 to August 21, visitors have the chance to “Touch the Sky” in the Frances Lehman Loeb Art Center, where artwork exploring humanity’s relationship to space will be on display. Photo courtesy of Vassar College

In the warmer months of the year, stars fill the night sky. An endless cluster of twinkling lights, these celestial bodies bring wonder to all those gazing below. It’s no wonder, then, that the night sky has inspired artists throughout history, from Van Gogh painting “Starry Night” to the Hubble Space Telescope’s enhanced photograph “The Pillars of Creation.” And currently there’s an entire exhibit at Vassar in the Frances Lehman Loeb Art Center devoted to the sky above and beyond.

“Touch the Sky” features 50 astronomy-inspired works by 18 artists in celebration of the new Bridge for Laboratory Sciences opening. The exhibit began on April 29 and will be ongoing throughout the summer until August 21.“Touch the Sky” is a multimedia exhibition featuring a wide range of contemporary pieces that explore the beauty and vastness of outer space. The Loeb is open every day except Monday and is free to the public. Specific hours can be found on the museum’s website, as well as information on additional current exhibits.

“Touch the Sky” Curator and Assistant Director for Strategic Planning Mary-Kay Lombino elaborated on why the exhibit is so relevant to Vassar’s science-rich community. “I came up with idea for ‘Touch the Sky’ because the campus is celebrating the sciences in honor of the dedication of the Bridge Building,” she explained. “I chose Astronomy for a few reasons. One, is the strong tradition of teaching observational astronomy at Vassar dating back to our first professor Maria Mitchell who was also the first female American astronomer. Another is that I noticed many artists working today are interested in the cosmos and several are engaged in sky gazing themselves.”

She reflected on the inherent human desire to conceive of the cosmos. “I have found that we all have felt the impulse to gaze up at the sky and wonder what’s out there but we can’t truly grasp the vastness of the universe or what its really like. We have to use our imaginations, which is what most of these artists are doing to create their work.”

Since the exhibit opened, other events have concurrently promoted astronomy and other sciences at Vassar. Michael Benson, a leading authority in astronomical imagery and one of the artists featured in “Touch the Sky,” gave a lecture on April 29 in Taylor Hall on how he mixes the subjects of art and science within his work. On April 13, Late Night at the Loeb included several student artists performing and then an outdoor screening of the George Méliès 1902 silent film “A Trip to the Moon.”

Professor of Astronomy Debra Elmegreen spoke on why events like “Touch the Sky” are enjoyable for everyone: “Since the exploration of the universe is tied to our roots as sentient beings, it is important to bring today’s scientific understanding to the public while at the same time acknowledging and celebrating the powerful visceral connection to the sky that we all feel. So I love the interweaving of science and art.”

She continued, “I look forward to the ‘Touch the Sky’ exhibit as a wonderful combination of astronomical images with astronomical art, as we all appreciate that part of what makes us human is being able to explore and appreciate both sides of that interplay.”

The artwork of the exhibit appears in many styles and from many sources. Nancy Graves ’61 created 10 lithographs of the moon’s surface and a film called “Reflections on the Moon’s Surface,” based on her studies with NASA in the midst of their lunar space missions. German Photographer Thomas Ruff made three chromogenic prints of Saturn that are reimagined compositions of NASA images. The oldest work featured in the exhibit is Lewis Rutherford’s “Moon in First Quarter,” dating back to 1865 and one of the earliest spectroscopic images of the moon.

“Whether you remember the exhilaration of the space race between the United States and the Soviet Union in the 1950s and ’60s or you follow NASA on Instagram, you’ve witnessed the continued human fascination with space exploration in the 21st century as evidenced by the continuous quest for a deeper understanding of the universe,” Lombardo wrote in an essay for the exhibit’s brochure. “Many of the artists in the exhibition pose questions about the possibility of truly envisioning the realm of space.”

Drama major and prospective astronomy major Phil Macaluso ’19 visited the exhibit, intrigued by the mixture of astronomy and fine art: “I hope to embrace both art and science in whatever I pursue after college, so seeing an entire exhibit dedicated to that was really quite inspiring. I think it’s important for artists to draw from science and the natural world because it’s full of both amazing patterns and intricate randomness which are instantly recognizable to us as a species.”

Throughout the last semester, astronomy has flourished. The Thompson Library featured an exhibit devoted to Maria Mitchell and her observations of sunspots. The exhibit runs through June 12. The Class of 1951 Observatory has also been studying data with its two telescopes. “Touch the Sky” visitors will have the opportunity on June 2 and 23 to visit the Observatory afterwards, possibly seeing Mars, Jupiter and Saturn.

Lombino hopes visitors will appreciate the same universal fascinations of outer space that these artists strived to capture. She commented, “The exhibition presents various attempts, from the purely scientific to the entirely interpretive, to discover, imagine and reveal the universe in all its vastness. Each of the artists in the exhibition brings a different perspective to the idea of the sky, whether stars, planets, the moon, the sun, a comet, a galaxy or the entire solar system. Collectively, the works on view are an expression of the natural human desire to fully understand the world in which we live. In the end, what is revealed by the works is the universal wish to achieve the unattainable—the ability to ‘Touch the Sky.’”