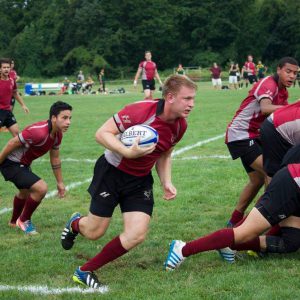 Graduating senior Zach Rippe played varsity rugby in his time at Vassar. Rippe was a captain of the men’s team this year and also served as Sports Editor for The Miscellany News. Photo courtesy of Zach Rippe

Another year at Vassar, and another sports season has passed. Although many athletes will return to the burgundy and gray next fall, 84 players will hang up their uniforms and say goodbye to Vassar athletics. The Senior Brewers have certainly left their mark not only on their respective teams, but also on Vassar athletics in its entirety.

This 2015-2016 season, Vassar saw notable achievements from many of its sports teams. Each team’s success came in large part from these 84 seniors. These athletes have worked tirelessly for their respective sports for four years and have helped build each individual program, in addition to Vassar athletics as a whole, to what it is today.

On Wednesday, May 11, the entirety of Vassar’s athletics community came together to honor Vassar sports and the numerous standout senior athletes at the Annual Vassar Athletics Banquet. While a number of seniors were nominated for their exceptional performances over their tenure, six specific seniors received top honors.

The banquet featured nomination videos for the top contenders for each award, and the awards themselves were presented by members of the Vassar Student Athlete Advisory Committee (SAAC).

At this year’s banquet, the athletics department also instituted a new award, the Vassar Athletics Student-Worker of the Year award.

The two-time captain started 76 of 103 games and this season was voted to the Liberty League Second Team. This year he also received the CoSIDA Academic All-District award, as well as Liberty League All-Academic Honors with a 3.76 GPA.

Later in the evening, Wasyl’s teammate Johnny Mrlik and women’s lacrosse player Isabelle Goldstein were honored with the Frances Fergusson Coaches Award. The accolade is given to one male and one female athlete who embody sportsmanship, leadership, dedication and character. The award is intended to recognize heart more so than statistics.

Mrlik, a basketball and baseball player, extended his Vassar career to five years after struggling through multiple knee injuries and surgeries. The senior still, however, helped to take the basketball team to its first-ever Liberty League tournament appearance in the 2013-2014 season. He nabbed All-Region honors, including All-Liberty League First Team.

Although unable to play basketball this past season, he still offered a valuable contribution to the team as a student-assistant. As a pitcher, he ranks seventh all-time at Vassar in earned run average.

Men’s head basketball coach Brian Dunne is sad to see his two seniors go, but is extremely proud of everything they have accomplished.

“Johnny Mrlik and Erikson Wasyl have been incredibly valuable to us over the past four years,” Dunne remarked. “Their effort, determination and grit have helped progress our program. They are the DNA of our program and I am so very proud to have had the pleasure and opportunity to coach them. They have made a lasting impact on our program.”

Goldstein’s career on the lacrosse field for the brewers is just as decorated as. Throughout her four years on the team, the senior totaled 63 points with 37 goals and 26 assists. She has the second most career points with 234, and also holds the most career assists in program history with 108.

In every year of play, Goldstein has earned an All-Liberty League award, including All-Liberty League First team in this past season. The two-time captain stands in the top 10 in eight different statistical categories, which helped her earn a spot on the Liberty League Honor Roll three times.

“Izzy came to Vassar with a high lacrosse IQ and terrific skills,” women’s lacrosse head coach Judy Finerghty commented. “Izzy’s game awareness, self-confidence and desire put her in many situations where she had possession of the ball when the game was on the line, and when she was able to score or set up another player. She is one of the very best lacrosse players to ever wear a Vassar jersey and her career assist record is set very high.”

The Matthew Vassar Outstanding Career Award is the most prestigious honor given at the yearly banquet. The award is presented to athletes who have improved over the course of their own individual career and who have shown unparalleled performance in league, conference, regional and potentially national competition.

Many know Vann to be one of the best male track athletes the program has ever seen. The two-time captain holds the school record in nine different categories, including the 100-meter dash, high jump, discus, long jump, javelin, shot put, pole vault, 110 high hurdles and the decathlon. He qualified for the ECAC Championships in the decathlon, often considered to be the most physically and mentally taxing event, three times over the course of his career and has consistently been ranked in the top 50 for the event.

This year Vann is also ranked third in the 2016 NCAA decathlon and will compete in the event at the NCAA Championships. In the 2014-2015 season, Vann was honored as the Betty Richey Performer of the Year.

Furthermore, he is a three-time All-Academic Liberty League member, has been named to the First Team All-Liberty League twice in the 110 hurdles and earned All-ECAC accolades his two previous seasons.

“Taylor has had the best season out of any male track athlete in the history of the program. He has worked extremely hard behind the scenes to be ready for practice every day and operates at a very high level consistently,” interim head men’s and women’s track and field coach Justin Harris mused. “He has been a tremendous competitor and leader on our team since day one. Even though most of his training is on his own, he always connects with his teammates about their workouts. When he doesn’t return to practice in the fall, his teammates and coaches will have to work double-time to fill the void.”

Drakeley also held her own with these impressive Vassar athletes, and is proudly regarded as one of the most talented basketball players in the program’s history. In her four years, the senior scored a total of 1330 points, finishing sixth All-Time.

After her sophomore, junior and senior year seasons, Drakeley was given All-Liberty League honors. During her third season, she was named a First Team All-Liberty League member and earned d3hoops.com All-Region Second Team, averaging 17.5 points per game.

The two-time captain is in the top 10 in 16 statistical categories at Vassar, including second All-Time in rebounding. Drakeley also holds the single-game record for field goals in a single game with a terrific 15. Moreover, in her sophomore season, Drakeley helped capture the team’s first NCAA win over Williams College, and later posted a hefty 30 points in another NCAA game against Scranton.

Women’s head basketball coach Candice Brown thinks Drakeley is very deserving of this esteemed award. “Caitlin has been a tremendous asset to our program her entire career,” Brown said. “Each year she has improved her game to become the best athlete that she could possibly be. Not only has she worked extremely hard on the hardwood but she has been a true pleasure to coach.”

Parson has been an unwavering offensive threat for Brewers lacrosse throughout his Vassar career, helping to steadily improve the program each year. During his freshman year, Parson was named a Second Team All-Liberty League player and received Honorable Mention honors as well, which was just the beginning of his success.

He is the all-time record holder for points, goals and assists. The senior set the single-season goals record during three different seasons, most notably this season when he scored 42 goals and 57 points.

The 2013 Liberty League Rookie of the Year–the first one in Vassar men’s lacrosse history–carries the program with goals per game and points per game, and he also has finished in the top 10 in goals in the conference all four years. Parson holds eight individual records, and this year helped the men’s lacrosse team to its best season finish yet: they recorded a solid eight wins.

Men’s head lacrosse coach Marc Graham explains how Parson will be difficult to replace. “Noah has been a tremendous part of the growth of the program here at Vassar, and he has been a pleasure to coach. On the field, he will graduate as the most prolific scorer in the history of the program. Noah’s impact will be felt for years to come and his records will stand as benchmarks for future Brewers to work to attain.”

As some of these awards recognize, balancing academics and athletics is an incredible feat. In spite of this challenging combination, a majority of Vassar athletes still manage to maintain a high GPA. This year 182 Brewers were named to the Liberty League All-Academic team, including 58 seniors.

Vassar’s high academic rigor combined with the extreme commitment college athletics requires proves how well rounded these student-athletes are. Maintaining such excellence all four years of college is an accomplishment in and of itself.

In only a short time these 84 seniors will pack up and leave Vassar one last time. Although next year they will be off in the real world, their achievements and contributions to Vassar’s athletic department will always be remembered.