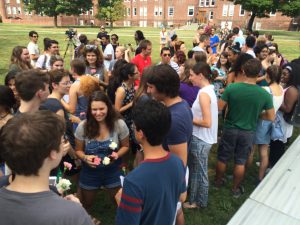 First-year students and seniors mingle on the residential quad after the Sept. 10 Serenading event.
This year, seniors gave the first-years flowers in Vassar colors to thank them for their songs. Courtesy of Karen Crook

“Womp womp womp womp / This hit / That ice cold / Meryl Streep / That white gold / Vassar, pump you up, Vassar, pump you up.” The Class of 2020’s serenad­ing song, an original cover of “Up­town Funk,” ended in reverberating beats and loud, warm cheers from the upperclass students. On the sun­ny Saturday afternoon of Sept. 10, Serenading took place at Residential Quad, honoring a century-long tra­dition at Vassar.

Over the past few years, Serenad­ing has transformed from what re­minded many of hazing into today’s peaceful gathering. Previous classes of first years and seniors have criti­cized Serenading for causing waste, environmental damage and, most importantly, personal attacks and antagonistic feelings. This year, the Traditions Committee revamped Serenading to make it more eco- and human-friendly: it now consists of flowers, a live band of professors and free Italian ice in lieu of water balloons and a food fight.

Last year, then-Noyes House Pres­ident Ashley Hoyle ’18, then-Pres­ident of Josselyn House Cecilia Hoang ’18 and then-President of Davison House Nathaniel Lindley ’18 collectively renounced their houses’ partic­ipation of Serenading. This year as Co-Chair of the Traditions Committee, Hoyle explained how she dealt with issues from last year. “The central element of the tradition, thus its name, is the singing, which is why it’s the only ele­ment that we maintained … [The water balloon event] doesn’t seem like the right way to foster community and I am comfortable with the fact that that element of Serenading has been put in the past. I believe that this new version is much more in sync with the Vassar spirit.” Other Traditions Committee Co-Chair Audrey Aller ’17 commented in an emailed statement, “Also it seemed fitting to have flowers be central to another Vassar tradition (think the Daisies, the Daisy Chain, the Violets).”

Reactions from students showed that they appreciate the transformation, but also have nostalgic feelings about the past. “I had a lot of fun with last year’s water balloon fight, but I could also see the point of view that maybe it wasn’t the best.” said Thomas Schindelman ’19.

Joseph More ’17 observed that there’s a lack of excitement compared to the past: “There used to have so many more steps. This time it’s like a more simplistic event, but I like that it’s mellow.”

Hoyle wrote that this year’s activities do more to foster conversations among students of all class years. When the song is done, seniors were encouraged to talk with first years and share flowers with them. The blurb sent out to seniors read, “Try to find a freshman who is in the same dorm as you were your freshman year, and try to give your flower to someone who doesn’t have one yet!”

Wendy Liu ’17 recounted her first-year expe­rience of Serenading and compared it to attend­ing this year’s event as a senior: “My freshman year, each individual house of first-years will sing to the seniors who have lived in the house before. I think for me it was very weird, because there’s a distinct hierarchy. It just felt really awkward and had a really bad dynamic. I think the rearrangement is cute, first years could have a chance to meet seniors. It’s a lot more organic and voluntary.”

Schindelman acknowledged the close bond­ing that Serenading achieved this year. He ex­plained, “I do feel like it’s definitely been more mingling of seniors and freshman as part of the event, whereas last year we just threw water balloons and [sang] at each other but we didn’t really talk.”

Further, Hoyle said, “There’s a conflict of in­terest to be asked to encourage first years to at­tend when we knew for some folks it is a highly anxiety-ridden experience, which we navigated by making the event more optional and less centralized by house as to alleviate house teams from any coercive responsibilities.”

According to Traditions Committee, this year’s Serenading brings more unity: “Fresh­men are no longer singing by house. Instead, they’ll sing as a whole class, and it’s complete­ly volunteer-based.” Students of all class years, faculty members and administrators are invited to hang out on the quad.

Shuang Qiao ’20 confirmed that not separat­ing the houses was more unifying. “I feel like the focus is on community rather than class year and house pride,” she said. “I love how it provides us the chance to meet new people and brings us together with music and flowers.”

Also, adjustments in time and location were made with the goal of accommodating more students’ needs and schedules, and this effort received good feedback from the students. “I like that it was during the year now. The fresh­man now have more of a chance to be acclimat­ed to school so that they could decide if they want to be a part of Serenading,” said Thomas.

As for relocation, Aller explained that be­cause the quad is “more central (not as far of a walk) and convivial…it attracts people to a loca­tion where students can mingle with their peers in a laid-back atmosphere.”

Both chairs reflected that their biggest strug­gle was balancing tradition and finding solu­tions for issues that were previously brought up. Aller wrote, “Successfully reinventing a tra­dition isn’t easy, it’s a years-long process. A tra­dition lives on through students, transmitting their excitement about the tradition to their peers from year to year.”

Hoyle also agreed on the importance of ren­ovating traditions. “I think it’s important to rec­ognize when traditions need adaptation to our changing times. In many ways, as is important, all our traditions are antiquated, but that does not mean we have to take them at face value or shouldn’t constantly be reevaluating their efficacy in our present context … By thinking critically about the structure in past years and doing our very best to really listen to folks with objections, I think we created a much more in­clusive, comfortable, enjoyable event this year,” wrote Hoyle in an emailed statement.

She also expressed that planning Serenading was a very rewarding experience. She said, “I was very proud seeing the way the event un­folded this year, as I thought it was actually transformed into a place for first years and se­niors to connect and that I never felt that folks were uncomfortable.”

Aller concluded, “I was convinced that Ser­enading was a dying tradition. But watching the event take place today, and the excitement of the people who participated made me really hopeful and confident in the potential of Vas­sar’s traditions to bring our community togeth­er … In the future, I would love to see the senior class sing their own song in answer to the first years serenading them.”