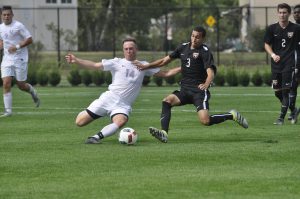 Vassar College men’s soccer takes the field this fall looking to built on its 8-6-2 record from the 2015 season. Veteran Head Coach Andy Jennings leads the team for his 26th season.

The Brewers won both games in the Vassar College Classic this past weekend, improving the team’s re­cord to 5-0.

On Saturday Sept. 10, the men de­feated William Paterson University 2-0. Sophomore Mitch Davis opened the scoring with a 16th minute goal off of an assist from freshman standout Mattie Mrlik.

Junior goalkeeper Matt Marcelino made four saves in order to secure his fourth win and second shutout of the season. Freshman keeper Will Marment made his first appearance of his Vassar career, playing the final 10 minutes.

Seven different players scored as Vassar outshot Elms 29-9. Marcelino made two saves to notch his fifth win and third shutout of the year.

Elms resisted the Brewers’ intense pressure early but the Brewers broke the deadlock in the 25th minute when junior Reid Smith scored off of an assist from junior Tanner Sands. Vassar held a narrow 1-0 lead at half time but the floodgates opened in the second.

Junior Jose Novas scored off an assist from Mrlik in the 55th minute. With Vassar dominating, Coach Jen­nings subbed in Marment for Marceli­no in the 60th minute. Shortly after, senior captain Noah Bloch’s wonder strike from 30 yards out put the men up 3-0.

Just three minutes later, junior Alex Gonzales made the most of a free kick when he headed the ball to Tanner Sands for a simple finish.

The always-dangerous Mrlik add­ed another goal in the 71st. Mrlik’s impressive dribbling helped him elude two defenders, where he then proceeded to slot home from a tight angle.

Freshman forward Kevin Baliat scored his first collegiate goal off an assist from senior Matt Fields in the 85th minute. Sophomore Desmond Curran then claimed his first career goal in the 89th minute to finish off the game.

Jennings has high expectations for his talented squad, especially after finishing the weekend 2-0.

“We lost 10 seniors but feel the core of the group is going to be strong and, as always, our goal is to host a Liberty League playoff game,” Jennings analyzed. “This means we will have fin­ished first or second in the league and would put us in a great position to receive the automatic bid to the NCAA tournament.”

“We have made a good start with five wins and no losses but the tough part of our schedule is league play which begins in a couple of weeks’ time,” continued Jennings. “We have good mo­mentum right now and feel very positive about our start. The team has really come together around some core principles about the way we play, which has been exciting.”

Along with Coach Jennings, senior captains Stephen Jennings and Bloch will provide import­ant leadership for this young side.

“Being a captain is a huge honor. I love the op­portunity to lead the team during my senior year and I hope that we can make a long playoff push,” Bloch said. “Everyone on the team has bought into the program and our attitude, so my job is actually pretty easy. I hope to continue to lead the team on and off the field with Stephen and con­tinue our winning streak.”

Stephen Jennings shared similar sentiments saying, “It feels great to be captain. I love this team; it’s a great group of guys. If we just keep up the attitude, this team is going to do great things.”

Stephen Jennings actually did not play last season because he traveled abroad to Australia in the fall. Despite this, he still remains an inte­gral part of the team as captain. When Stephen recovers from his at the Thompson Memorial Library achilles tendonitis, he will undoubtedly be a force to be reckoned with on the field.

The squad is expected to be one of the top teams in the Liberty League, despite graduating integral seniors, including Jordan Palmer, Tom Weichert and Cosmo Veneziale.

Senior forward Andreas Freund also did not return for the Brewers after spending the year abroad in Germany.

Helping to offset the loss of these players is a talented freshman class led by forward Mrlik and defender Henrik Olsson. Mrlik has gotten off to a hot start with three goals, three assists and nine points in his first five games. He follows in the footsteps of his All-American brother Zander (’13) who was a solid defender for the Brewers.

“It’s been great playing with Mattie. He’s brought a ton of energy to the team and he’s a real quality player,” VanBrewer noted. “Having Mattie and a big freshmen class that all work in­credibly hard has really helped us to get off to a good start this year.”

Hailing from Tokyo, Japan, Olsson is an im­portant member of the team as a defender, and also poses as a threat on offense.

Anchoring the Brewers is Marcelino, who is replacing graduate Sebastien Lasseur. The alum started 12 games and notched 54 saves last sea­son. We will also likely see senior keeper Adam Warner in goal once his elbow sprain improves.

Bloch and junior Tanner Sands are a solid force on the backline, along with center back duo Tyler Gilmore and Tim Collins. In the game against Manhattanville, Gilmore headed the ball into the back of the net twice to secure a 2-1 vic­tory for the Brewers.

Sands, also a versatile player, already has three goals on the season. He proved his exceptional abilities last year with 13 of 15 starts and five goals.

Vassar’s defense is particularly strong because of its depth. Davis has started four games, playing an important role on the right wing. Curran, se­nior John Lopes and freshmen Loizos Karaiskos will further contribute to this resilient back line.

“The team’s defensive success is derived from our attitude. We came into the season knowing that is was going to be our central focus. Every­one has committed to our defensive system and shape and the work ethic has been unbelievable,” Bloch analyzed. “Last year we lost multiple games 1-0 but I think this year we have the heart and the desire to push on and win those games just like we did against Manhattanville a week ago.”

The midfield, dominated by Van Brewer and Smith, has plenty of depth as well. Freshmen TK Murphy and Nathaniel Kim are already seeing significant playing time. Junior Noah Snider, like Jennings, is crucial in the middle but is on the in­jured list with a pulled hamstring.

Gonzales also suffered an ankle injury early in the season that limited his playing time. Last year, the California native was fifth on the team with seven points, two goals and three assists.

Although only three forwards are listed on the roster, the team has had no problem scoring. Ju­nior forward Jose Novas will look to provide of­fensive firepower along with freshmen Mrlik and Kenyan Baliat.

Last season, Novas played in all 16 games. He netted two goals and recorded one assist, all in the Brewers’ first win of the season against Mar­itime College.

Vassar has a challenging 17 game schedule ahead of it, consisting of 10 home games and sev­en road matches. The schedule includes eight conference matches, highlighted by an Oct. 1 road contest against St. Lawrence, which is ranked 11th in the NCAA Division III Pre-Season poll.

Other notable regular season matches include an away game against No. 3 SUNY Oneonta and the Senior Day home match against University of Rochester on Oct. 22. Shortly after the conclusion of the regular season, the Liberty League Cham­pionships begin. In order to qualify, the team must finish fourth or better in the conference.

With an experienced coach staffing and an abundance of talent, the Brewers will be tough for any opponent. If the team can improve on its record from last year and play well in the Liberty League Championships, then a spot in the NCAA tournament should be well within reach.

“There’s a really great team spirit this year which starts from the coaches and captains,” VanBrewer reflected. “We’ve worked hard in preseason to improve. Everyone is committed to reaching our team goal of hosting a Liberty League playoff.”

Vassar will take on New Paltz on Wednesday Sept. 14 at home, followed by an away contest against Oneonta on Saturday Sept. 17.