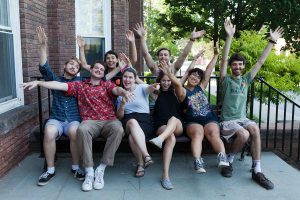 Pictured above are members of CAAD’s three summer multi-arts collectives, eight-week collaborative projects by students from various departments along with faculty members. Photo courtesy of CAAD

How close are we to reaching artificial intel­ligence? What defines personhood? What distinguishes an android from a human? What makes us human? These are just a few of the stimulating questions posed in this weekend’s production of “In the Case of a Person,” a pre­dominantly student-run show put on by one of the groups in the summer program run by the Creative Arts Across Disciplines (CAAD), and was written and directed by Omri Bareket ’19, Andrea Orejarena ’17 and Carson Packer ’17. Vas­sar students and faculty eagerly flocked to the five different showings of the play.

Three students collectively representing drama, cognitive science and computer science seamless­ly wove together these seemingly unrelated fields into an hour-long play. The play explores many of the ethical questions that become relevant when science confronts societal views and values. And by giving the audience the reigns, the student-run production presented an ongoing debate in a cre­ative way, giving spectators the illusion of witness­ing an authentic, and not a staged, event.

After signing in 15 minutes before the play, show-goers received a seat number in the familiar lecture hall, Rocky 200, which became astir with curiosity. When asked about their expectations of the show’s content, Jimmy Pavlick ’18 could only offer, “I know it’s student-run and that the audi­ence is given some control.” Stage Manager Eli­anna Scheide ’20 shared with me before the show, “It’s meant to be a bit of a surprise.” No one knew what to expect once they sat down to observe a courtroom scene with tablets displayed in the left front row, and a lighting crew in busy preparation.

A hush fell over the chatty audience as the ac­tors descended the stairs and began their opening lines. Then, select audience members were per­plexed to hear their names ominously announced via a faceless voice, sending them to the jury se­lection box near the front of the stage. As the play progressed, the audience and jury were presented with several different characters and stories, all culminating in a final, dramatic soliloquy and ver­dict. Yet what made the play stand out was that, to a large extent, the actors were spectators as well, unable to predict the subsequent scene and events. In fact, the show’s plotline was largely in the hands of the jury, who consistently made decisions via their tablets concerning the next scene’s lighting sequence, characters and overall direction. As the show unfurled in the form of a tense murder trial, the jury specifically chose several characters to ap­pear on the stand and give their crucial testimony. Isa Pengskul ’19 commented, “It was kind of tense, there was no real music and it felt like I was in an actual courtroom.”

The style of the show put the actors at the mer­cy of their audience. Andrea Orejarena ’17, a writer and student director of the production, stated that one of the show’s main goals was “to play with in­teractive theatre-making,” a relatively untouched area in the theatre world. The interactivity of the show was undoubtedly deliberate, as Orejarena ex­plained: “By giving the jury control over the plot, they resultingly became more invested in the show and its direction.” With this adaptability and au­dience inclusion, challenges proved concomitant. Since the jury is given multiple choices for the next scene’s content, logically there are many possible paths that the play can chart.

“Each branch was a new and complex permuta­tion that had to be given a detailed script and re­hearsal time,” detailed Orejarena. Surely it wasn’t any easier for the actors, either. Allegra Kaufman ’19, who played key witness Mrs. Newman, evi­denced the challenges of her role: “What is hard is understanding the situation and how much your character knows [and] realizing the discrepancy between what I believe and what I’m fighting for.”

The trial centers around the question of wheth­er Sam, an android programmed by a robotic en­gineer, should be condemned for killing a woman on account that she is superficially just a machine. Kaufman offers, “The show really looks ahead to the future, and begs the question of how we will deal with these issues once they become relevant.”

Yet we may be closer to that future than we think. In this day of omnipresent technology and innovations, Scheide observes, “the line between machine and human is becoming increasingly blurred,” and society’s definition of “personhood” is neither clear-cut nor unequivocal. Indeed, au­dience members discover that despite an android lacking the biological anatomy of a human, he or she can exhibit qualities that might be labeled as “human.” This goes hand-in-hand with Orejena’s hypothesis: “We judge intelligence and sentience on rationality. But her emotions that drove her to… murder are exactly why we cannot deny her per­sonhood.” This project posits that humans retain personhood from both the empathic and hostile tendencies that define them.

The show was an irrefutable success, and its ex­ploration of such a complex and often controver­sial topic only heightened its appeal. Ava Linvog ’19 commented, “It was so refreshing to be able to interact with the actors.” Isabel Sakarin ’19 a mem­ber of the jury, exclaimed, “Five stars. Being in the jury was so fun. I’ve realized that our capacity to create artificial intelligence is growing, and with that comes a growing lack of control.” Sakarin’s in­sight demonstrates the pensive power of the play. As Orejena notes, “partaking in this production has made me more conscious about these issues that are relevant today.” For what deems a person a per­son? Who is deserving of life? The play poses and leaves unanswered such weighty questions.

And for those involved, it couldn’t have gone any better. The production of the show drew to­gether an eclectic group of students, representing different backgrounds, intellectual passions and ideas. As a student-run project, the increased free­dom was also met with an increased responsibility, which fell on the playwrights and stage-manager to ensure organization and progress. All challeng­es aside, the autonomy awarded to a student-run show is invaluable, as Kaufman shares, “We can mess around, change things up and ask questions and think…but then also get work done.” All those involved expressed their utmost pride and accom­plishment, and each intend to pursue unique forms of theatre like this that are exhibiting the evolution of drama into a more fluid form. “It’s been fun,” Kaufman reports, and this fun looks to continue for the rest of the academic year.