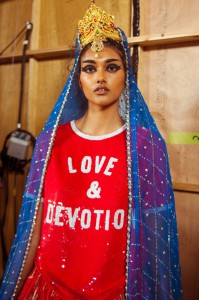 Unlike the troublesome nature of some of the runway shows of New York Fashion Week, London Fashion Week was filled with runway shows that knocked it out of the park in the best ways possible. The mistake known as Brexit has proliferated racist sentiments within the U.K., leaving many people of color pushed to the outskirts of the national identity. Regard­less of varying stances on Brexit, the U.K. can­not deny that it is inextricably linked to other cultures. I hate to point out the obvious, but the British Empire did, at one point in history, hold almost a quarter of the world’s total land area. Because of this, the U.K. must understand its identity as one that is composed of a multitude of the cultures that it colonized.

The most striking reminder of this from the runway was Indian designer Ashish Gupta’s show for his brand, Ashish. The show was titled “Bollywood Bloodbath” and served as a way for Gupta to highlight the political and cultur­al unrest in England. The show opened with a blind sitar player delivering a live performance. The first look was a male model robed in a glit­tering golden dress (with a thigh high slit, of course) strutting down the catwalk with a py­thon draped over his shoulders. Upon this first look, the direction of the show was established: Indian culture and ways of dress married with a modern elegance yet unapologetically badass attitude.

My favorite look was an ensemble of a red-se­quined graphic T-shirt with the words “Love & Devotion” printed across the chest, an intricate gold headdress holding a cerulean silk veil in place and a red sari skirt embroidered with sim­plified floral patterns. The show was literally and metaphorically dazzling thanks to Gupta’s mastery of sequined fabrics. What was even more spectacular was the gender-fluid nature of the show. The models were dressed in tradition­al Indian fabrics adorned with embroidery and embellishments. The marriage of East and West was achieved in the use of Western silhouettes in treating the Indian fabrics. There were se­quined tracksuits and double denim, slip dress­es and saris, all with a romantic air about them.

The Ashish show, overall, had an ethereal quality to it. The traditional Indian garments mixed with Western tailoring donned by models in Indian makeup styles and accessories were almost an homage to the deities of the Hindu faith. The models were a modern translation of the figures of Hinduism. They embodied faith, culture, tradition and power. They called atten­tion, but were otherworldly. They were their own group of characters in a larger spectrum of London Fashion Week, but not separate. This bold visual statement reflected how the Indi­an people find themselves unwelcomed by the hateful sentiments in the political sphere of the U.K. at this very moment. One thing is for sure: they are undeniably a part of the U.K. and it will not be forgotten that this is so. Ashish Gupta proved this in his finale greeting of the audience in which he takes a bow in a white long-sleeve T-shirt with the word “Immigrant” printed across the chest, a word linked to both his own identity (he immigrated to London from Delhi in 1996) and to the impact Brexit will have on the country’s borders.

Another standout show from London Fashion Week was by J.W. Anderson. His collection was inspired by King Henry VIII. The Tudor king defined a particular shape for the garments in the collection, which British fashion critic Suzy Menkes described as “narrow, elongated to be­low the hips, then flowing into a skirt that might swoop short or twist for part of the fluted hem­line. The shoes were balanced on hefty heels that were sliced as if coming apart.”

Anderson gave a nuanced explanation of his inspiration and the effect of its translation on the modern female body: “It’s from the Henry VIII period, but it’s part of a whole idea about relics, the idea that a woman would take some­thing from the aggressive masculinity of a pe­riod of bygone days and be, not a warrior, but wear a shape that is very empowering.” Indeed the show was a tour de force cut-and-paste mélange of different textured fabrics, dye colors and patterns, geometric shapes and accessories. The spirit of the collection was the empowered woman unbound by any and all expectations of how to present herself to the world at large.

Finally, Mary Katrantzou also delivered a show that truly showcased her vision as a Greek artist. Her collection fused classical references and Futurism by unearthing Minoan artifacts and giving classic frescoes new life in juxtapos­ing it with 1960s pop art patterns and details. The collection was undoubtedly full of quota­tions from classical Greek art: chariots riding at an angle across A-line dresses, sun rays strip­ing on narrow trousers and patterns explod­ing around Grecian amphora decorations on the breast of a dress. The designer explained, “There’s an infusion of very optic, kinetic, psy­chedelic ways of distorting and warping the Minoan deities, priests and all the females of Minoan times.” Hence despite the very old ref­erences, Katrantzou’s collection was signaling towards a direction of the new. What better way to do so than with an authentic reference to one’s own culture and heritage?

Ultimately, London Fashion Week was filled with remarkable collections that deserve to be recognized. It was refreshing to see designers challenge cultural norms without co-opting. The appeal of these designers stems from their awareness and pride in who they are, how they manifest their complex identities in fashion and the thrill in the unexpected possibilities of what is to come.